In September 2002 a team from Kadoorie Farm and Botanic Garden (HK), together  with mainland Chinese researchers did a "Rapid Biodiversity Assessment" of Luofeng NR in north Guangdong.  The area has a population of the rare Crocodile Lizard (Shinisaurus crocodilurus), the main reason for Nature Reserve status. Luokeng Nature Reserve was upgraded to National NR status in 2013.

Among the KFBG report findings was that Himalayan Swiftlets (Collocallia brevirostris) were using a cave at Luokeng. This was the first record for Guangdong Province. A link to the report pdf is here:-

There have been regular (mostly winter) sightings of swiftlets in Hong Kong, and they have mostly been ascribed to brevirostris, although the possibility that some other types are occurring is being considered.

With a few unusual summer swiftlet records in HK this year, it seemed timely to check out the Luokeng Swiftlets, with a view to firming up some identification criteria, so Richard Lewthwaite organized a trip to go up to Luokeng to look for them. Ruy and Karen Barretto, Martin Hale and I joined him.

After a dawn rendezvous at Lok Ma Chau Boundary Crossing Point we were met by our driver, Mr YIP, and driven though some steady rain up the highway from Shenzhen. It was about 280 km to get to the turnoff for Luokeng, which lies 40km westwards from the highway along the x317 road.

After some uncertainty (only RWL and R & KB had been there before, in 2004, but had arrived in the dark) we found the Nature Reserve HQs. A staff member was sent to show us the "Swiftlet cave" and we duly arrived after a ten-minute drive from town. 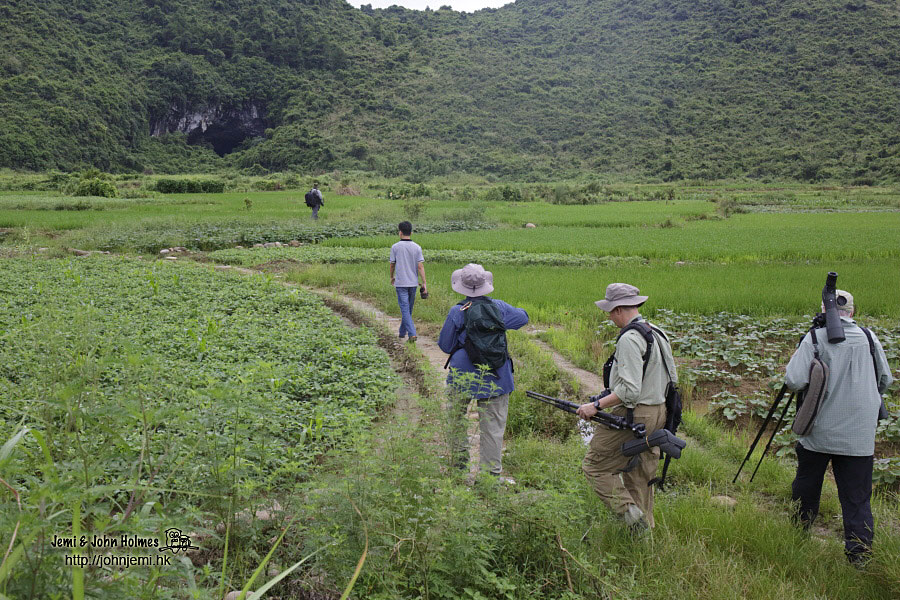 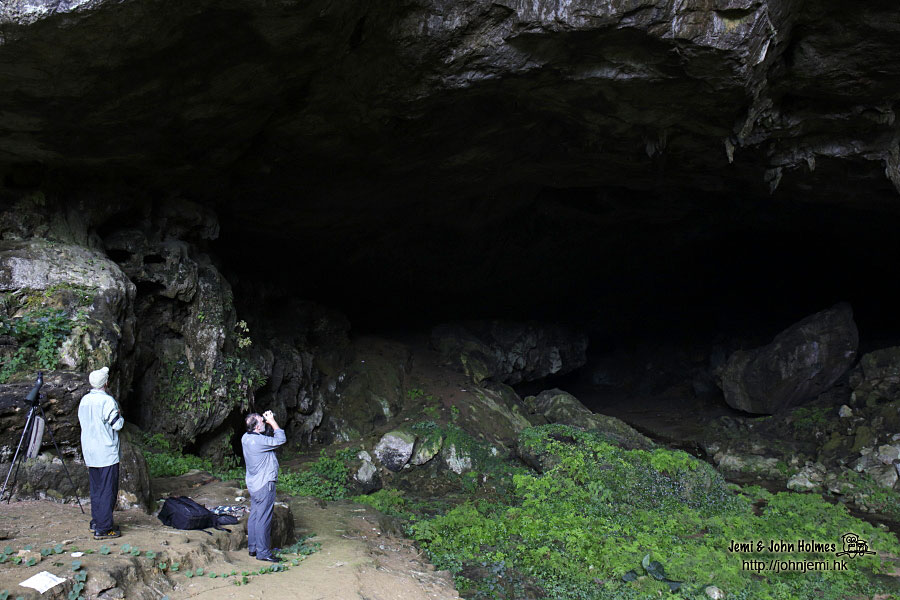 There were no signs of swiftlets using the cave, and only a few bats were present.

We birded around the area near the swiftlet cave until dusk,  Swifts, both House Swift and Pacific were seen but no swiftlets were noted. No birds appeared to be using the cave. At last light we noted a Peregrine perched on a branch near the mouth of the cave, but concluded that it was waiting for bats to come out.

The weather improved overnight, and no swifts or swiftlets of any kind were seen on 21st August.

The nearby fields produced a flock of eight Black Bazas... 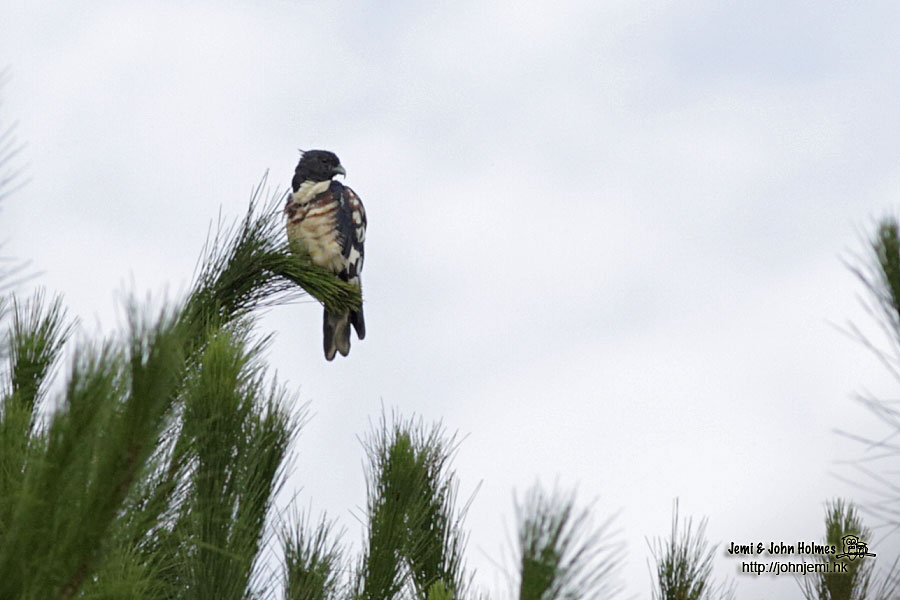 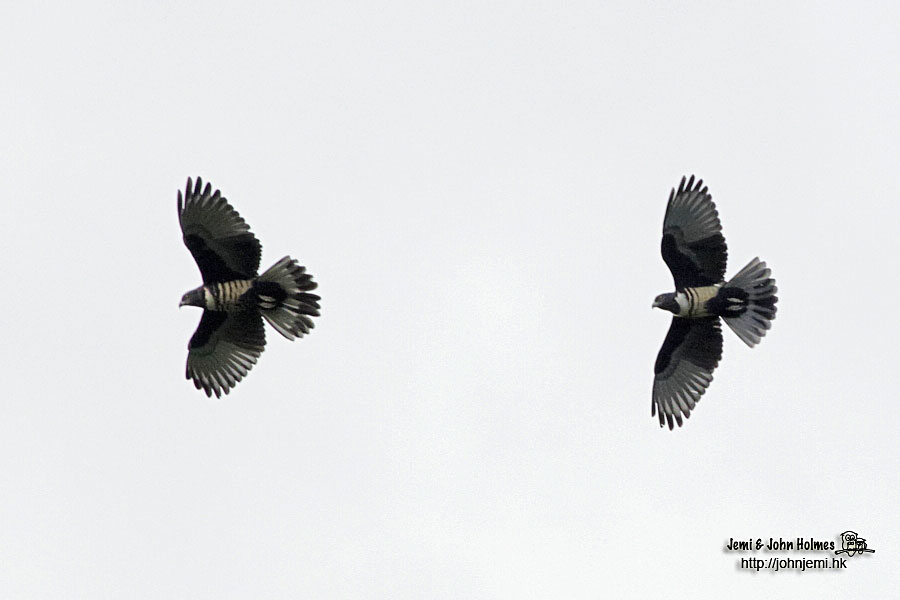 …..and a Chinese Sparrowhawk. 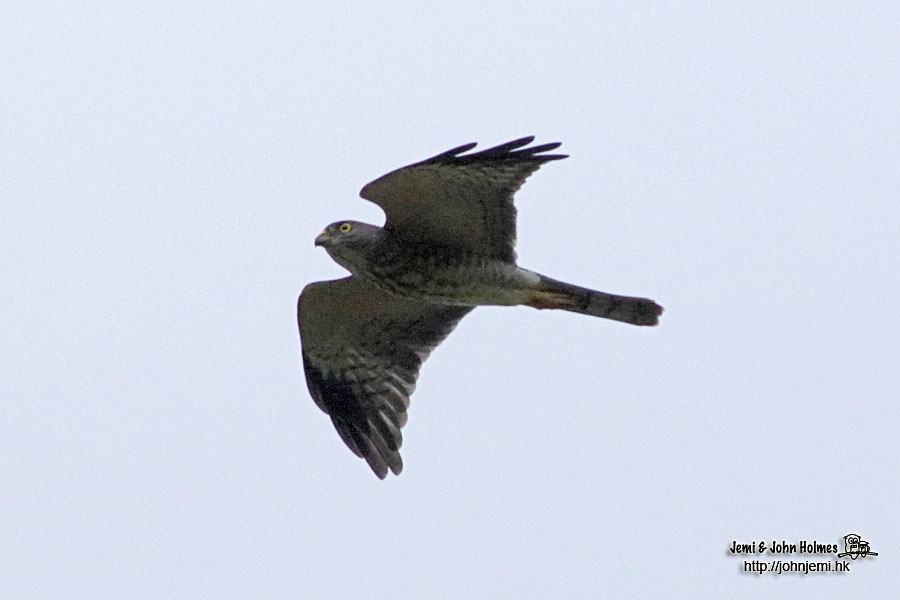 Some winter visitors had arrived, including this Grey Wagtail. 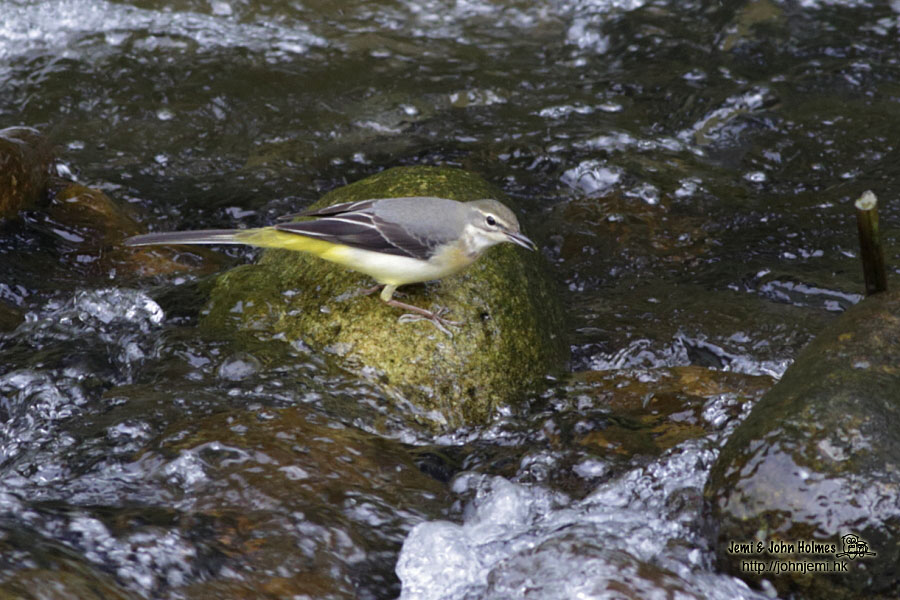 Intriguingly, we had glimpses of a largish possible Mountain Pigeon a couple of times, but couldn't nail the ID.

A large migrant flock of mostly Little Egrets dithered at the edge of the reservoir. 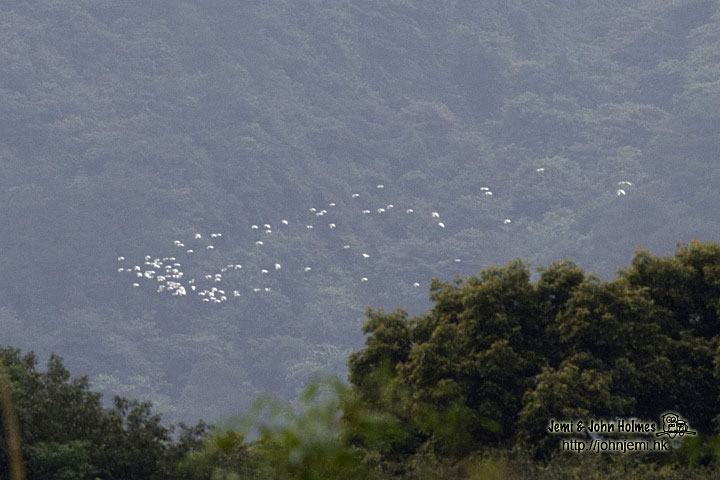 Some Yellow Wagtails and a Stejneger's Stonechat were in grassland near the edge of the reservoir, too. It was good to see birds we consider winter visitors to Hong Kong on their way south.

Livelihoods have improved in recent years for the residents of Luokeng, but rural development has not flattened every historical building, so some vintage stuff remains, including this old residence outside the town. 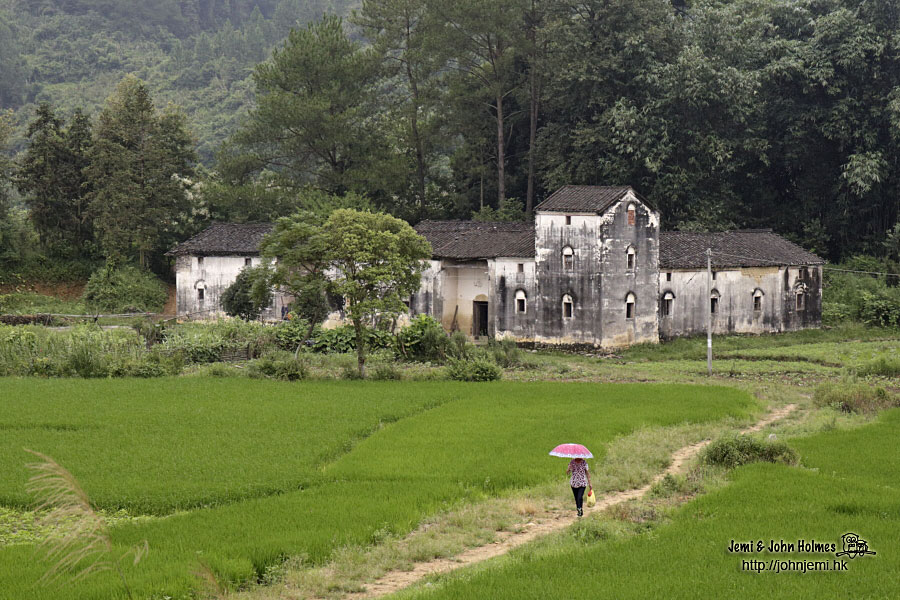 We noted this collection of agricultural implements, ready for the rice harvest in October. 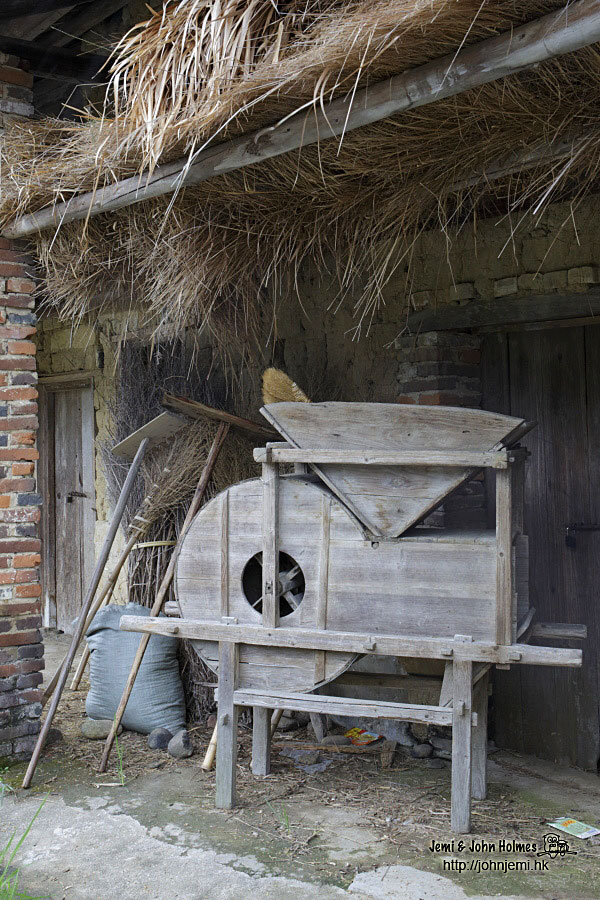 Even now "Outdoor Facilities" are a reality for some, - but there's no "Greener" way to do your business ! 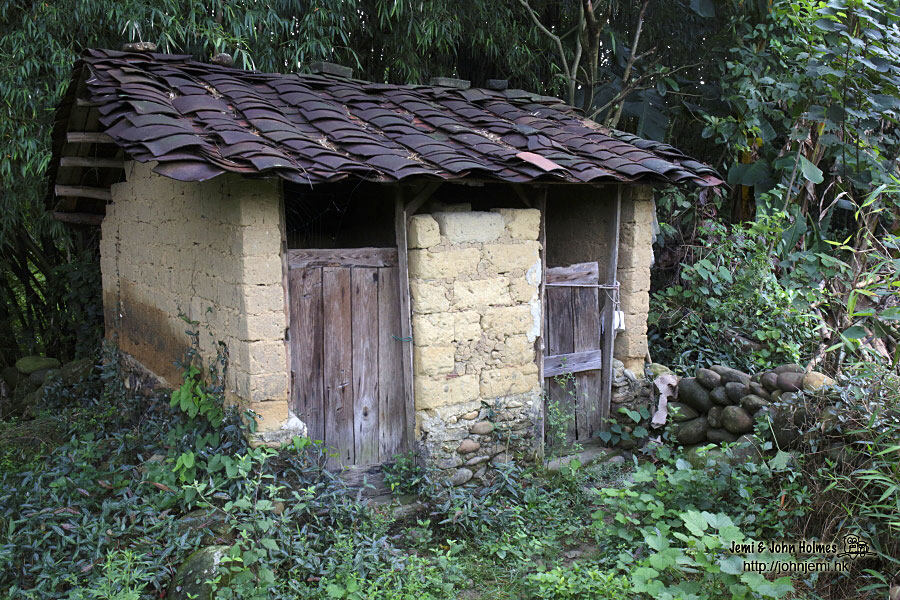 A reminder of the "bad old days" in rural China was this fortress near one of the villages.  Villagers built these forts a century or so ago with a view to to barricade themselves inside as protection against marauders. 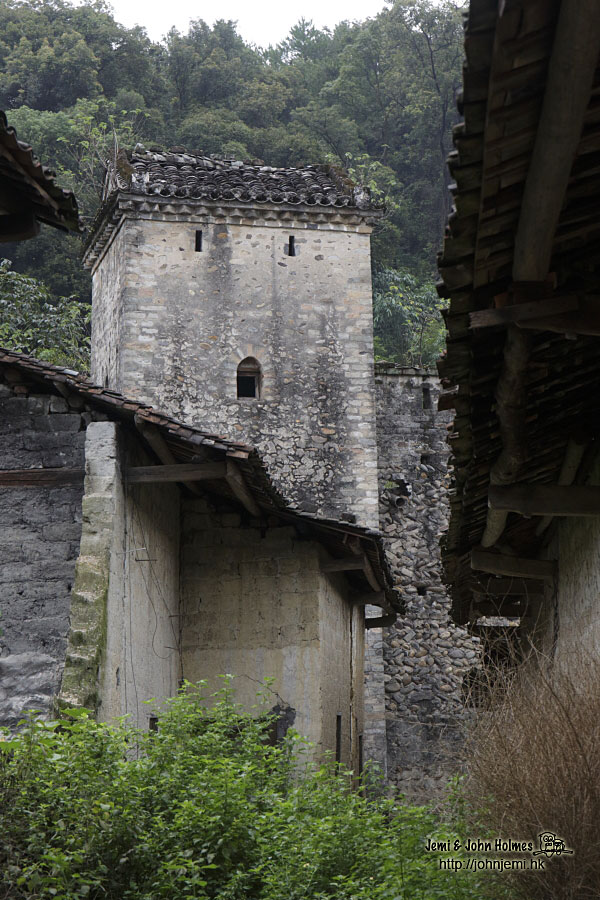 Shortly before midday we departed and were driven back to Shenzhen.  We saw fifty-or-so species in our few hours of birding, but drew a blank with the swiftlets.

Whatever the outcome, though, it's always worth going "into the field" to check things out for oneself, and the fresh, cooler air of northern Guangdong made a nice break.

Hong Kong is at the eastern end of the wide range of the Pied Kingfisher.

An image of Pied Kingfisher is used in Hong Kong as the symbol of Worldwide Fund for Nature, HK, and it's fitting that this species can be seen (with a bit of luck) at Mai Po Nature Reserve.

A couple of days ago I came across a pair of these birds on Tam Kon Chau Road, the access road to Mai Po. 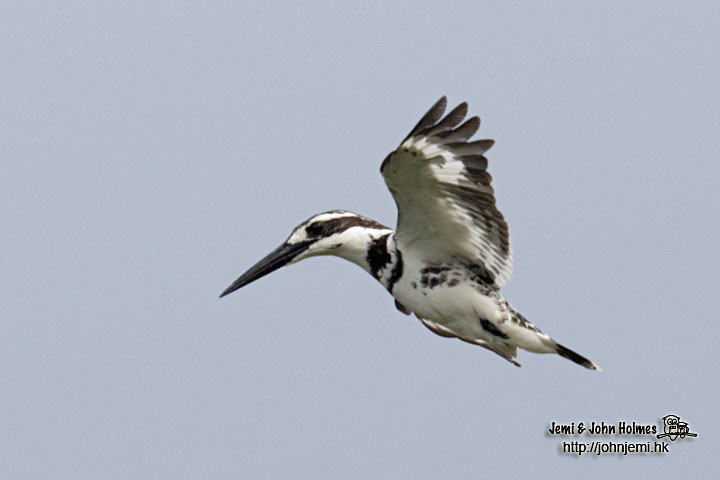 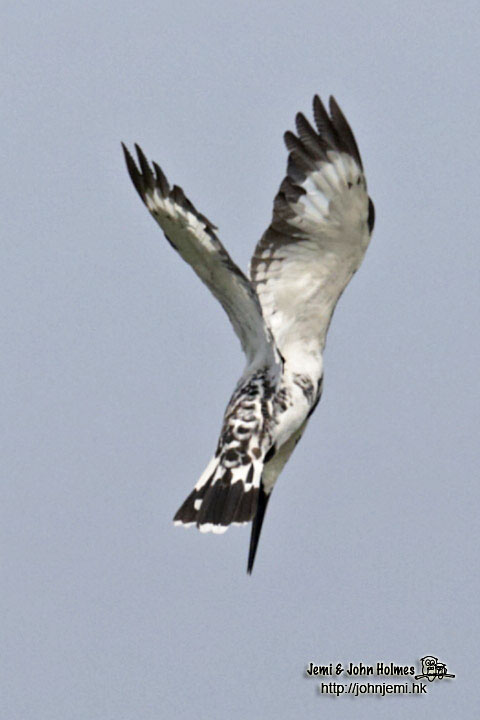 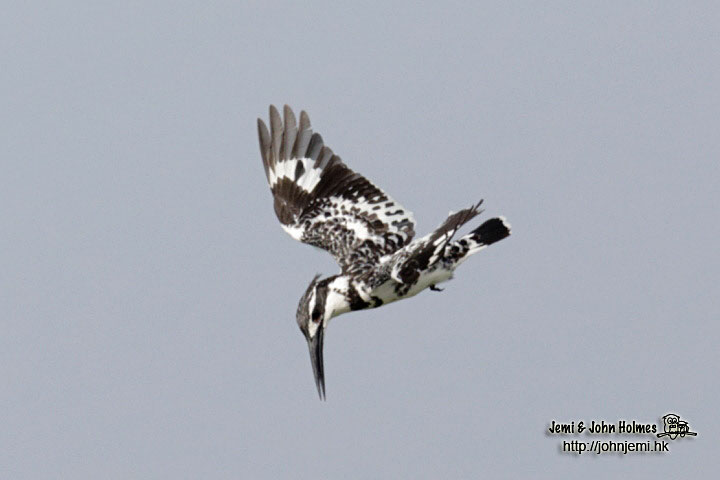 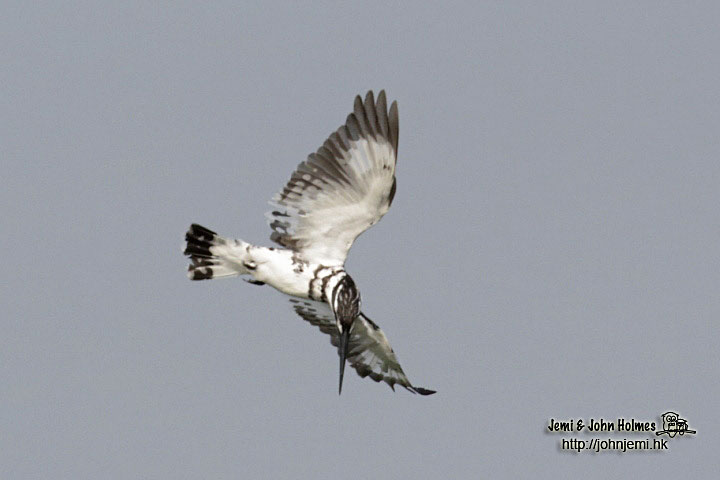 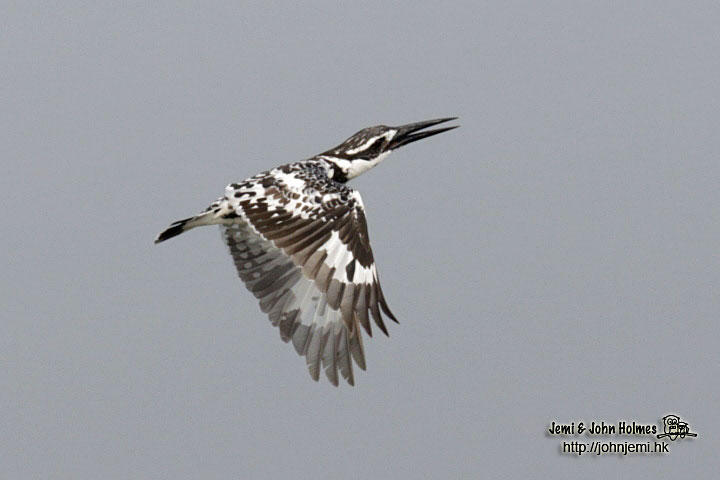 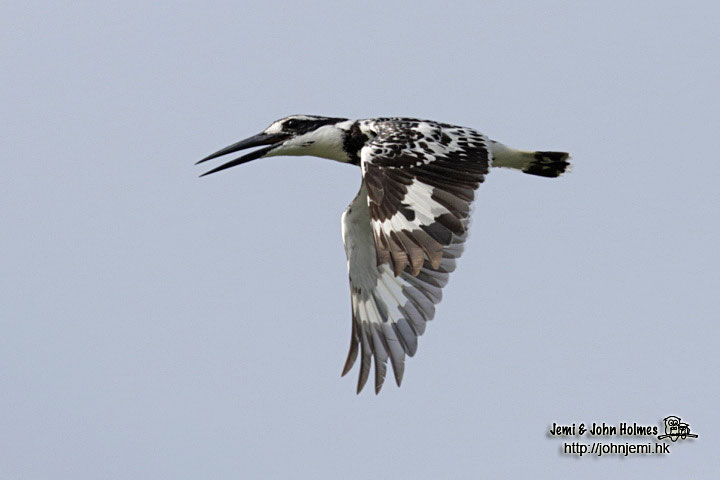 Try as I did, I couldn't quite get one at the same angle as the WWF logo - never mind.