We've had a few clear, sunny days and birding conditions have been at their best in terms of comfort and air quality.  Clear air in winter in Hong Kong usually follows southerly or easterly breezes from over the South China Sea.  Cold northerly winds usually bring pollution with them.

Out at Tsim Bei Tsui - across Deep Bay opposite Mai Po, I came across this Serpent Eagle sitting over a bare patch of ground. The car made an effective hide.

From the boardwalk hides at Mai Po, at least two Black-capped Kingfishers seemed to have staked out their own territories.

November is the best autumn month to see the crab-killing expert Saunders' Gull.

But when the mudflats (and the crabs) are getting covered by the rising tide, even Saunders' Gull will resort to robbery. 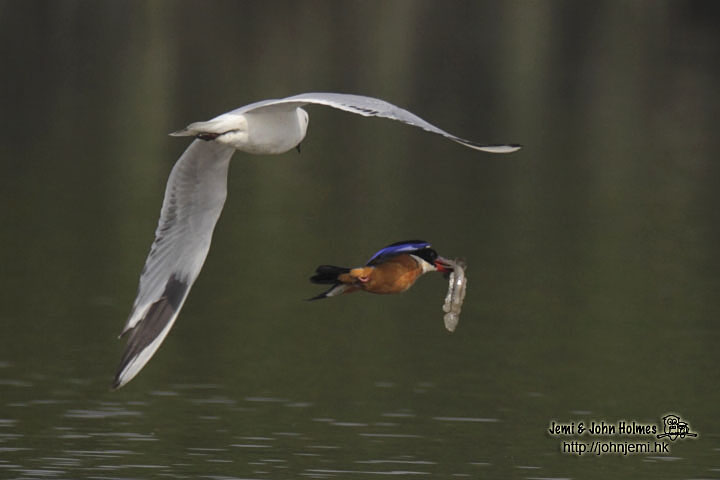 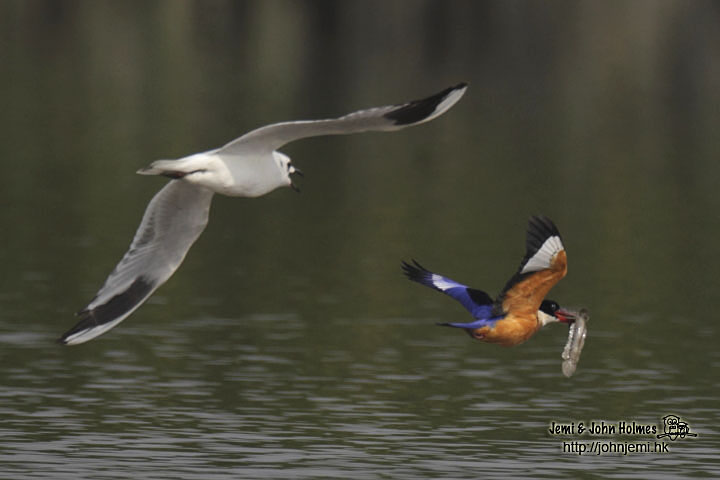 Or "Attempted Robbery" in this instance…. 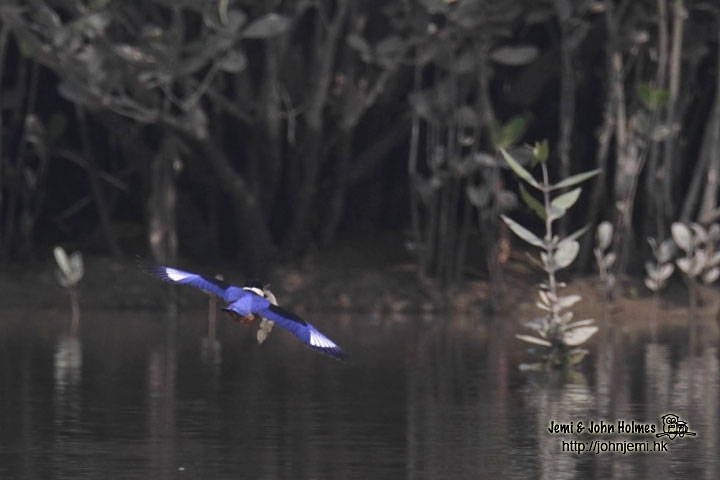 450 Pacific Golden Plovers were noted during the November Waterfowl Count.  Some came close to the hides over the next few days.

A sizable flock of Dunlin is also present right on the Deep Bay mudflats right now.

The wintering birds are not ALL waders, here are a couple of shots of Tristram's Bunting. Pretty much a closed-canopy species, with poor light for photography, but these are with a 500mm f.4 and 5d Mk 3 combination, which can work well in the gloom.


Out in the open, an Amur Falcon has roosted overnight on a power cable, over a grassy hillside with a view of the bay.

Perhaps due to the recent mild weather, some migrant birds are passing Hong Kong later than usual this year.

But with any luck, this one will be in southern Africa by Christmas !
Posted by John Holmes at November 28, 2014 6 comments:

The Hong Kong birdwatching Society is among a number of Green Groups that grow rice in the Long Valley area of Hong Kong.  Apart from the family fun involved in harvesting modest quantities of the stuff, some rare birds, especially buntings, are attracted by the prospect of all that grain.

"The Big Bunting" is the name of the BWS's competition to predict how many series of bunting will turn up in the late autumn/winter.  Nine species were found at Long Valley last year.

And Long Valley, only a small area of cultivation, is looking for its' 300th species.

At the start of this week (8th November) Long Valley's "star" bunting was this attractive winter male Pallas's Reed Bunting.


The bird liked the wet edges of a particular lotus pond, but, solitary and unobtrusive, it was hard to discern through the tangle of vegetation.


Anything named after Ornithological pioneer Peter Simon Pallas must be good, but even this wasn't a "first" for Long Valley - actually, one of these was photographed in the same pond two years ago.


On Tuesday, 11th November, the first of the Long Valley rice plots was harvested. 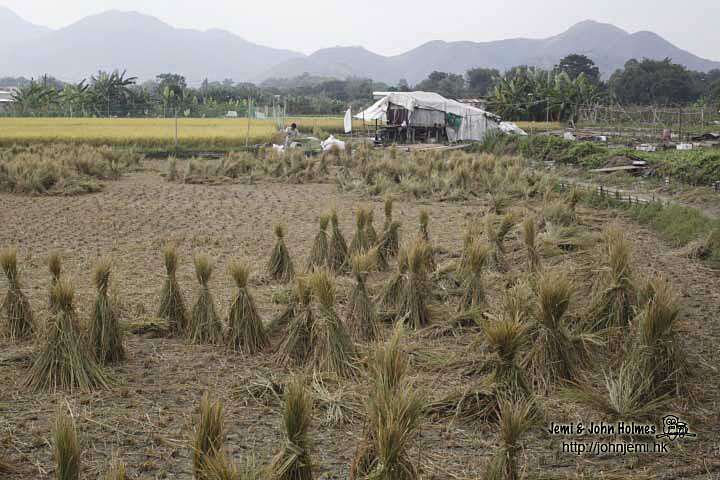 Not for nothing are Yellow-breasted Buntings known as "Rice Birds",  - they can feed on the standing stalks of this food staple.

Persecution of them throughout their range has meant continual decline in their population levels. But, at Long Valley, the agricultural area centered on the Green Group rice patches has been holding over one hundred of them for the past few days.

A versatile species, they also feed in wet ditches away from rice fields….


Another species around at the moment is Chestnut-eared Bunting, a few have shown well at Long Valley this week.

Two days ago, an ID request on the HKBWS website brought a flurry of excitement, when the mystery bird - a bunting of course - appeared to be Hong Kong's first Pine Bunting.

A determined "twitch" ensued the following morning, and the bird was around the first of the rice fields  to be harvested. 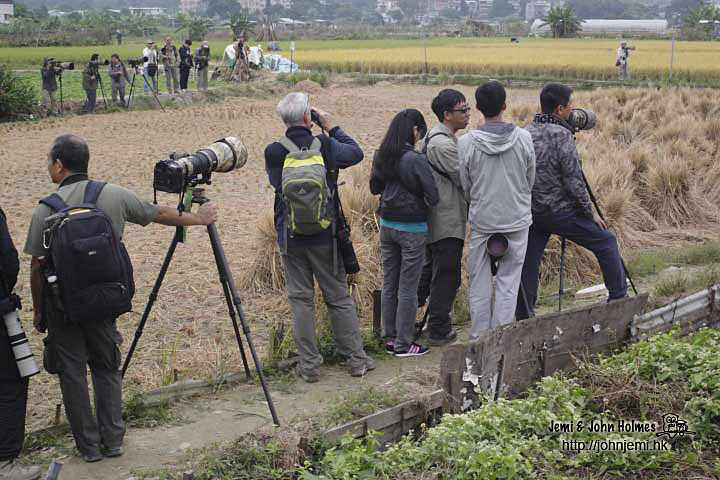 I'm cautiously optimistic that this bird will be accepted by the Hong Kong Birdwatching Society's Rarities Committee as a genuine vagrant, and should become Long Valley's 300th recorded bird species.

And while so many observers were there, a number of other noteworthy buntings were seen, including this rather nice (and "rare in Hong Kong") Rustic Bunting.

Five species of Long Valley buntings in this post, and a total of ten (I think) seen in the area so far this autumn.

The other species (for the record) have been: -

Thanks to the efforts of all those involved in rice cultivation, it's looking like this could be a record season for buntings !

AND Crested Bunting (Melophus lathami) was seen at LV a couple of days after this was originally posted
Posted by John Holmes at November 15, 2014 8 comments:

Birds - strangely - defy human classifications, and so most species in this post fall into both these Hong Kong categories.

Here are some examples;


At Long Valley, the wet fields also hold a few familiar species, most here for the winter now; -

And, while everyone else was seeing rarer and exotic buntings the other day, the best I could come up with were these shots of one of our commonest winter visitors;

Yesterday I partially redeemed myself by getting a few shots of Yellow-breasted Bunting. Although an Endangered species, there were thirty-or-so around the area.

According to the Cantonese Lunar Calendar, today marks the start of winter.  It's very grey and cool outside this morning.