Peter Kennerley's paper in the 1984/5 Hong Kong Bird Report is an account of a survey of Po Yang Lake, on the Yangtze River in the north of Jiangxi Province. He described the place as "..the avian spectacle of China".

Dec.22nd
I flew to Nanchang, capital of Jiangxi Province with Nigel Croft and Mike Turnbull. We had no official contacts and no reservations but we had spoken to some other Hong Kong Birders, including Mike Chalmers, who had just got back.

From the CAAC Airport Bus we noted Northern Lapwings in the cold dry paddyfields on the way into town. We were assigned a room in the Nanchang Hotel which seemed to be part of an illegal extension to the roof, but we shrugged it off as we had no intention of dallying there.

Dec.23rd
It was still dark when we boarded the public ferry to Wucheng. My yellowing notebook records that we paid RMB 5 each. By the time it got light we were moving through a mainly featureless, flat landscape. Strong winds blew across the open plains and the temperature hovered just above freezing. Fortified by large bowls of spicy noodles we shivered on wooden benches as the boat went aground several times, and people got off and on at unidentifiable spots on the bare river banks.We were impressed at the sight of a very hardy dog swimming across the river. 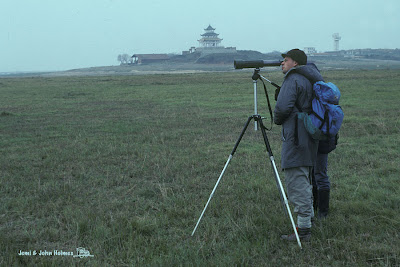 MT in front of the Wucheng Pagoda

We knew that Wu Cheng, at the confluence of two of the Yangtze tributaries, could be recognised by a large pagoda and a white "Crane Viewing" tower. We planned to seek rooms at the Nature Reserve HQs, but if these were too expensive we'd find rooms in the town and hope to see some birds before we got kicked out.

After seven hours on the boat we were relieved to strike a deal with the Nature Reserve people. Someone was even assigned to us to make sure we didn't get lost.

Wucheng lay at the eastern end of a long ridge (an island when summer rains made the lake higher). It had been a prosperous town at the edge of Po Yang Lake but seemed never to have recovered from bombing by the Japanese in the late 1930s.

Birding around the edges of town we picked up familiar species such as Grey Heron, Little Grebe and Black-headed Gull, but several hundred Greater White-fronted Geese on the distant grassland and some overflying Bewick's Swans were new.

Dec. 24th
Overnight at Reserve HQs we had beds with warm quilts with cranes embroidered on them, rusty bathroom fittings and sleep interrupted by crackling sounds which turned out to be mice scampering up behind the sofa to nibble our plastic-wrapped snacks. Wherever we tried to hide the food, the mice could always find it: - they had played this game before ! 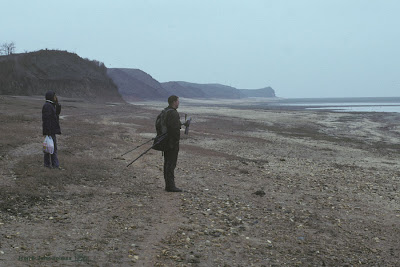 Daybreak found us wandering along the shore of Da Hu Chi, encountering large flocks of Swan Geese in the lakeside mud.

This was only a prelude to what awaited us. After a morning's walk, we rounded a corner and beheld this sight - 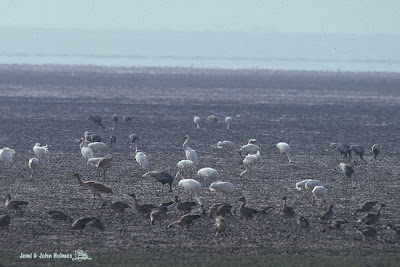 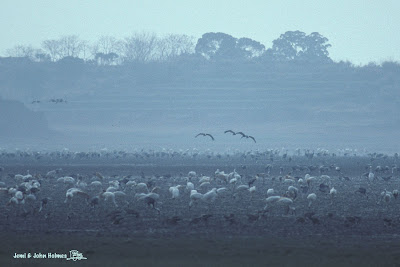 There were hundreds of Siberian and White-naped Cranes on the lakeside mud, with Swan Geese in front and Dalmatian Pelicans overhead.

This was what we had come for. 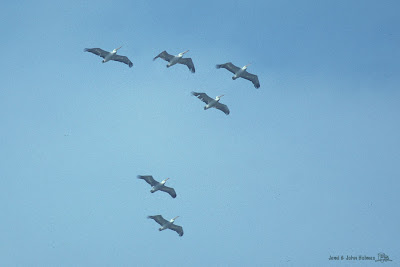 Dec.25th
We engaged a ferryman to take us to the island of Ling Gong Zhou. Earlier in the month we knew that the HK birders had there seen Swinhoe's Crake - the sight of a bird with a scientific name like "Coturnix exquisitus" was a compelling reason to have a look. Sadly, most of the grass had been harvested, and we missed the crake.

Once, a Chinese Water Deer broke cover from reeds at the waters' edge, and raced greyhound-like out of sight.

We settled instead for Great Bustards in the distance, beyond another host of Whitefronts. 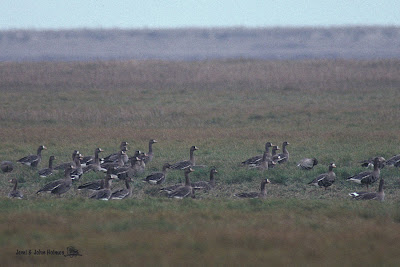 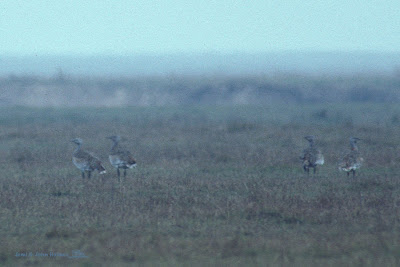 Nigel and I were admiring a pair of Common Mergansers in a creek when we became aware that MT was having conniptions. He pointed out a drake Merganser further back:- "Scaly-sided Merganser !" This was a bird the previous visitors had missed, and seeing it was a surprise in the days before it was more generally known that S-SM breed in the east of Jiangxi. It was great to get our "Bird of the Trip" on Christmas day. 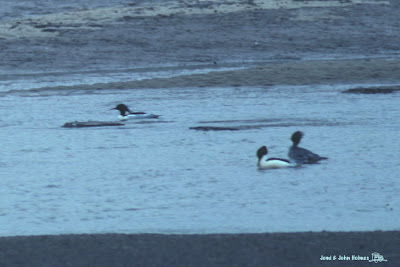 In Po Yang's wide-open landscape the birds were often quite distant, but there were LOTS of them: hundreds of Cranes and literally thousands of swans and geese.


Dec.26th
On Boxing Day we wandered over the hillsides to the west of Wucheng. A variety of buntings, Daurian Redstart and Grey-backed Thrushes could be found at the edges of fields and woods. 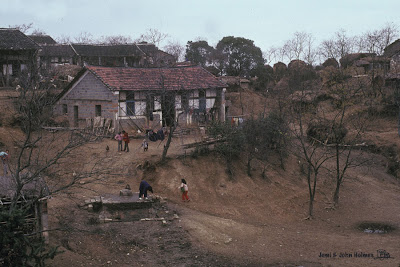 We paused to count the cranes on the mudflats of Da Hu Chi below. (In fact NJC was delegated to do it, I was "scanning for raptors".. ZZZZZZZ).) We estimated that there were 800 Siberian Cranes in view from this one viewpoint. 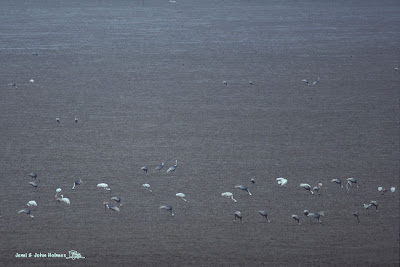 Later in the day we were pleasantly surprised to find another lone birder at Reserve HQs. Over dinner Krys Kazmierczak recounted his adventures of the winter, including getting turned away from then "closed" Caohai (a site for Black-necked Crane) in Guizhou Province.

Dec 27th
A longish walk out to Mei Xi Hu. Views of Eastern Marsh Harrier, including a nice male and a variety of geese and cranes dropping in to the lake, set among grassy sand dunes to the northeast of Wucheng.

Raptors, as had been remarked upon by others before us, were surprisingly rare at Po Yang. We came across a dead Harrier and a mess of entrails by the riverside. In those days, villagers poisoned the ducks using rice laced with strychnine. The plan was to catch the duck after it had keeled over, and rip the guts out before the poison spread to the duck's flesh. It was apparent that birds of prey eating the discarded duck entrails were perishing as well. There were also examples of human duck-meat consumers dying of strychnine poisoning, but the practice continued.


But the thoughts of this didn't dampen our overall enthusiasm for Po Yang, though. It really did seem like as fine an avian spectacle as one might hope to see anywhere in asia.

Dec 28th
Our ferry return to Nanchang proved even more sporting, as we were now going upstream, and the river had had another week to fall even lower. We were getting used to the cold by then, and the hotel in Nanchang didn't seem quite as bad as it had a few days earlier. Also, it must be said, we weren't on the illegal rooftop extension.

Dec.29th
We arrived back in Hong Kong, having missed the excesses of Christmas partying, but knowing that New Year would give us a chance to catch up !
Posted by John Holmes at December 21, 2009 No comments:

Pond 21 has been cleared of much vegetation and clutter, resulting in far more open space and water at the south end of the reserve.

It was a time-consuming and expensive job, so "Well done" to the WWF HK managers and staff at Mai Po.

The open area has proved attractive to both duck and cormorants, the latter roost by the hundreds there in late afternoon. (The duck use 20/21 overnight, mostly)

The site is also popular with various raptors as well.. 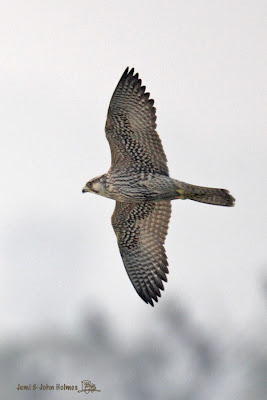 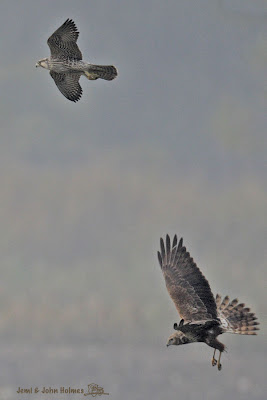 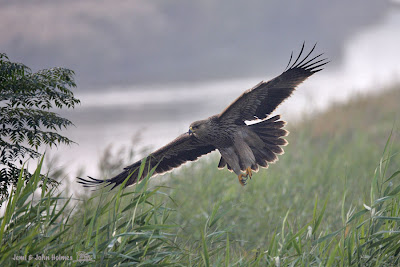 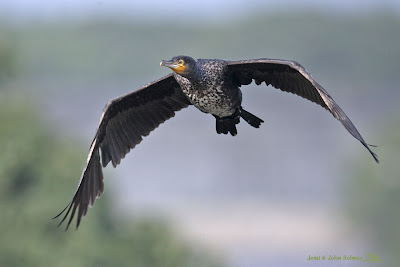 So Monday morning found me in the scaffolding and canvas "Conning Tower" hide at the NE corner of Pond 20.

These shots were taken there.
Posted by John Holmes at December 15, 2009 2 comments:

This monolith is actually in Shenzhen, but Saturday 12th Dec.2009 was quite clear, and the Cormorants were flying back to Mai Po Nature Reserve (southwards) from the mouth of the Shenzhen river. 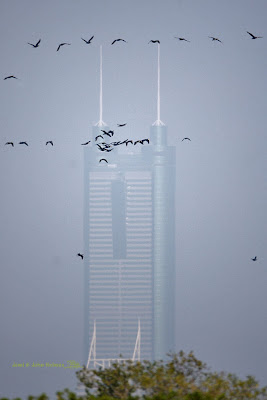 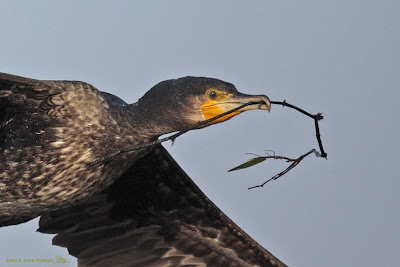 Oddly warm weather..
Is this nesting material ?
A toothpick ?
They don't even breed here !
Posted by John Holmes at December 13, 2009 No comments:

I'm not a regular consumer of preserved eggs, but even if I was, I don't think an assurance that some are "Lead Free" would make me feel better about scoffing them... 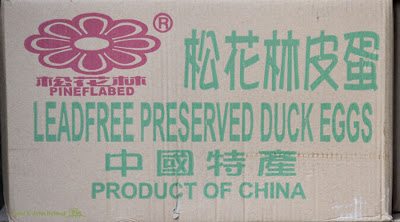 LOTS of raptors around today, hazy sunshine and a cool easterly wind. 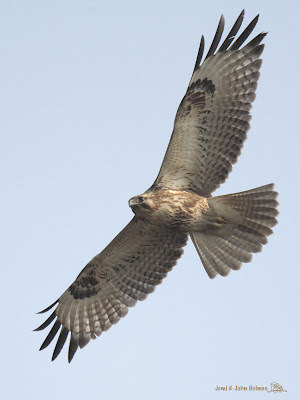 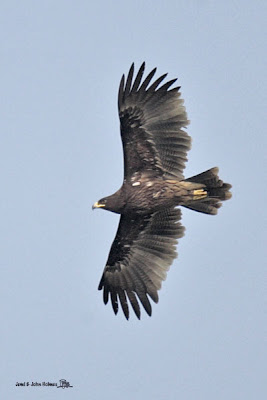 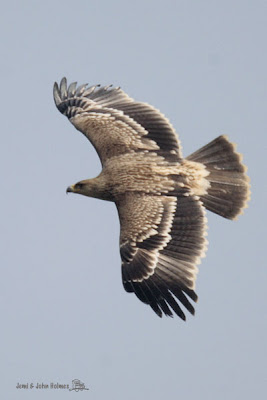 Imperial Eagle, one of four today 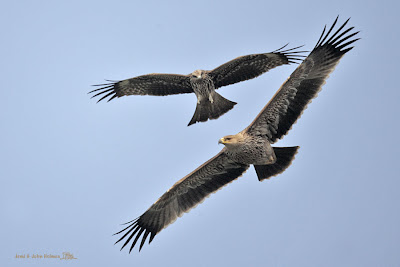 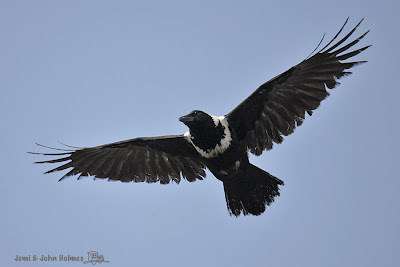 and a Collared Crow !

Corvids are "cool" too !

The sober and scientific tone of this blog resumes next week. Or not.
Posted by John Holmes at December 06, 2009 1 comment: