The are umpteen species of tern of the HK “list” and we are lucky enough to get three handsome species (Bridled, Black-naped and Roseate) breeding on some of the weathered granite rocks that dot Hong Kong’s southern and eastern waters.

By early May the islets are populated with noisy, quarrelsome terns in the process of pairing, securing nest spaces and breeding.

They can often be seen carrying fish as offerings to potential mates.

The Agriculture, Fisheries and conservation Department (HK Government) puts up signs in an attempt to stop careless humans from landing on the islands and disturbing the birds, but this doesn't always work.


Mid-April to mid-May is usually the ideal time for boat trips in HK waters to look for migrant terns and other seabirds as well.

2019 was not as spectacular as some previous years, but a few migrant terns and other seabirds were tallied, too.

Sometimes, not everything at sea is a seabird.

I know long-distance landbird migrants may have to fly over stretches of open sea, but it is still a thrill to see them actually doing it.
Posted by John Holmes at May 16, 2019 3 comments:

On 30th April we sailed from Xiamen bound for Okinawa on the Costa Atlantica.

On board were three Hong Kong would-be seabirders (Carrie Ma, Jemi and myself) and about two thousand mainland Chinese Golden Week merry-makers.

We intended to use the four night/three full days schedule to bird two days at sea north of Taiwan, - out and back - and get what birds we could on a very restricted "Tour" of Okinawa.

Here is the route (map by Carrie Ma) with the yellow areas "birdable" in daylight.

Last September we did a similar cruise, from Xiamen to Miyakojima. That time the ship was the Superstar Gemini.

Although the 3rd level deck of Costa Atlantica was spacious, there was no public area with a view of the sea surface to the front of the ship. The only view at the rear was at the 9th level. With space at the ship sides devoted to giving many cabins their own balcony, all round viewing opportunities on Costa Atlantica were more limited than on the earlier ship.

It started raining as we left Xiamen (Fujian Province) and wet and windy decks the following morning (May 1st) meant that we were forbidden to go outside on the 3rd level.

We sneaked out anyway, but after an hour or so ship security staff led us back inside.

We ended up at the rear deck of the 9th level, where our only clear view of the sea was from next to the designated smokers’ area.

Most of the birds we saw were distant.  In fact it seemed like some species were actively avoiding the boat.

A strong northerly wind came with the rain, and a few migrant passerines were seen, including a party of seven Yellow Wagtails which settled somewhere on the upper decks.

We soon noted that a Peregrine was hunting the birds resting about the ship.

As we passed the Daiyoutai/Senkaku Islands, up to forty Brown Boobies circled high on the wind-sheltered side to hunt flying fish disturbed by the ship’s passage. In this respect,  the ship was attracting the hunting boobies.


This time the flying fish got away.

There were also a few Masked Boobies, and a single (brown morph) Red-footed Booby.

On May 2nd, after Immigration formalities, we all disembarked for the scheduled “Sight-seeing” coach trip on Okinawa.


We called briefly at Senaga Island. 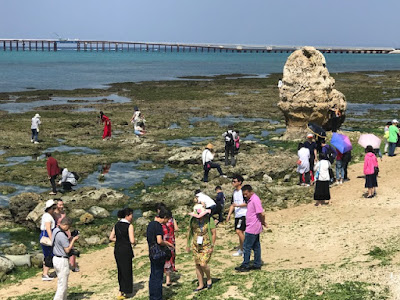 It was a scenic spot with a few waders and co-operative Little Terns.

Our second stop was at Shurijo Castle Park, where Blue Rock Thrushes were numerous and confiding.

Shopping was the main objective for many of our shipboard companions. Across the road from the first of three stores the tour coach visited, at Nishizaki, we found more waders on a pleasant little beach.

Eventually we got back on board the Costa Atlantica, and a full day at sea (May 3rd ) saw us cover much of the same area as two days earlier, passing close to the north of Taiwan on our way back to the Chinese mainland.

With fine weather, we had unrestricted deck access. Carrie saw and photographed a Sperm Whale, and we all had brief glimpses of dolphins.

From mid- to late morning the Brown Boobies were chasing flying fish again....

But later - after we left the disputed islands behind and entered the Taiwan Strait - there were no birds to be seen.


It was a long afternoon as we examined various items of rubbish on the sea surface in the hope of discovering more birds.

I think that these trips are as instructive for what we didn't see, as well as what we actually saw.  So, no albatrosses or storm-petrels, but there were areas with regular appearances of Bulwer's Petrels and Brown Noddies, both of which might be breeding in the area.

Red-footed Booby is unusual in Japanese waters, but was probably attracted by the activity of the Brown Booby flock.

Thanks  again to Carrie MA for planning and organising the trip !

Since the demise of Google+, although I have redone my Google profile, I am strangely unable to reply to comments on my own blog !