The nest and young of Beck's Petrel have never been found, but they are believed to be nesting high in the misty hills of New Ireland.

The Whitney South Seas Expeditions of 1920 to 1932  “visited nearly every significant island in the South Pacific…to collect birds…” (Watling, 2004) The principal bird collector on these voyages was Rollo H. Beck, and in 1928 he shot the first specimens of the bird now known to science as Pseudobulweria becki - Beck’s Petrel, an smaller version of the more widespread Tahiti Petrel.

Beck’s Petrels then went unseen for eighty years until a confirmed rediscovery by Hadoram Shirihai in 2003 to 2007.  The bird has plenty of mystique, due in part to its little-visited main geographic range, but it is suspected to breed on New Ireland.

Heritage Expeditions’ Western Pacific Odyssey (WPO) recorded them subsequently every year after 2007 when they travelled through New Ireland waters.

In 2013 we had done the “WPO", and had seen one or two distant Beck’s Petrels off Cape St. George, the southern tip of New Ireland, but had passed most of the coastline after dark.

There may been dozens of Beck’s Petrels roosting in the bay in March 2016, but our traverse of the bay at dawn and dusk revealed only one sitting Becks, and, although we saw a few individuals flying parallel to the coastline, they seemed to be positively avoiding the Yacht Sauvage.  The weather was very calm and the birds seemed rather listless.

There were compensations, though, in the number and variety of cetaceans to be seen.  New Ireland is a raised coral atoll, but the tectonic plates of the Pacific “Ring of Fire” are close offshore, and a deep oceanic trench lies close to and parallel with the shore.
We saw Short-finned Pilot Whales every day, as well as Risso’s Dolphins, Spinner Dolphins,  and several Sperm Whales.


A highlight was a view of a party of three Sperm Wales seen very close. 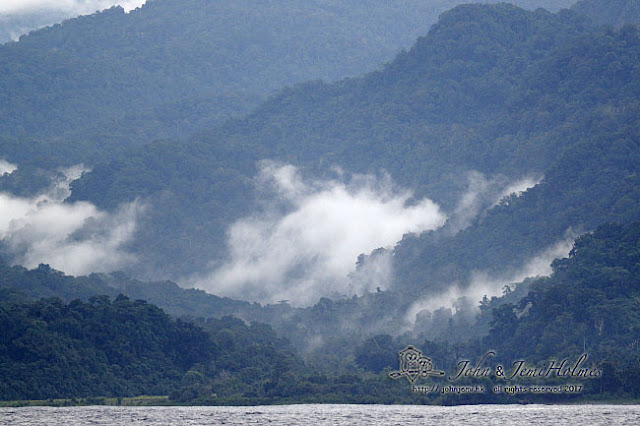 It became obvious that Becks Petrels were going to remain “difficult”. We left the area after three days, mildly frustrated that we couldn't get closer views most of the time. We sailed away from Cape St. George with a squall in view to the south and the wind increased.  Then it was time for the Beck’s Petrels to to swoop over the choppy leaden-coloured seas.  They hadn't really lost their mojo, they were just waiting for the wind to get up....!

We were heading back to the Solomons via the south coast of Bougainville.

We saw a couple of water spouts, but a more intimate signal of nature’s whims was a sequence of five slight judders felt across the Sauvage itself, as if a giant hand was slapping the keel several times in quick succession.  The phenomenon brought even our hosts on deck to find out what was happening.  We guessed at the cause, but this confirmed it for us - shockwaves from an underwater earthquake.

A couple of days later we were back near Gizo in the Solomons, where a Solomons Sea Eagle and the sight of locals rowing to market greeted us. 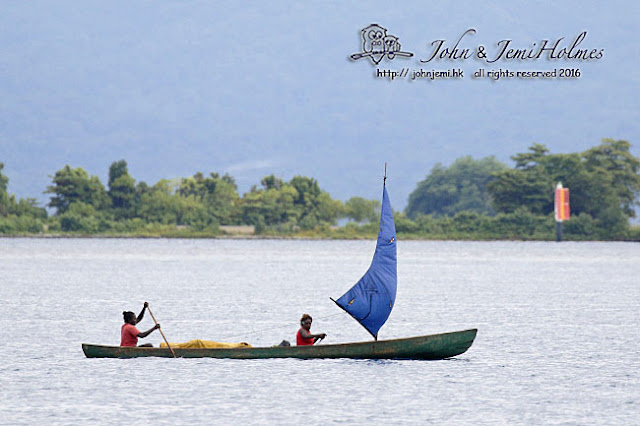 We had all read Peter Harrison’s paper (Notornis,2014,Vol.61, 97-102) about his March 2013 study of Heinroth’s Shearwaters in the seas of the Vella Gulf near the New Georgia Island group, and we had seen two or three in the Blackett Strait near Kolombangara, (after we left Noro on Jan 16th) but the birds were quite distant.

So, with five days left before our departure flight out of Gizo, and having seen very few anywhere else, we returned to nearby Kolombangara, and started to work the Blackett Strait for Heinroth’s Shearwaters between Kolombangara and Kohinggo (formerly “Arundel”) Island.


Again, birds were most active where schools of tuna chased sprats to the ocean surface.  In late January mixed flocks of wintering Eastern Common Terns and Black Noddies made up most of the seabird flocks, with a few Brown Noddies in the mixture. Small groups of up to five Heinroth’s Shearwaters were found associating with Tern/Noddy flocks of 100-200 birds or more.

Local fishermen would row to where these noisy salt-and-pepper flocks revealed the presence of fish, large and small. 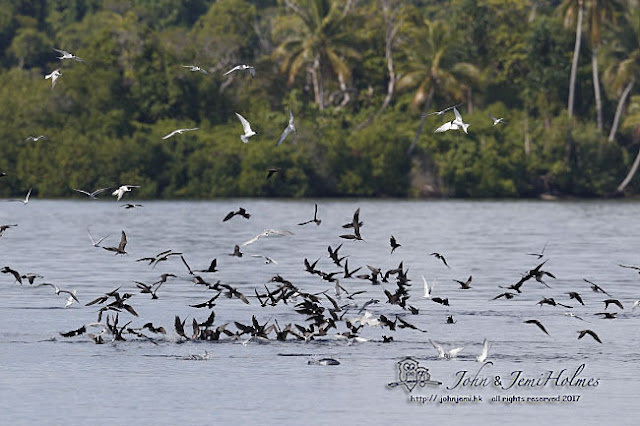 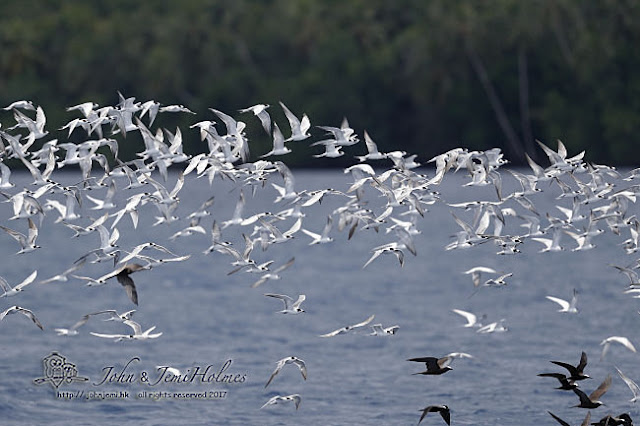 A faster wingbeat and a willingness to “snorkel" for fish made the Heinroths easy to distinguish after a little practice.

As described in Peter Harrison’s paper, the Heinroths would often be floating at the edge of the resting flocks.

We were able to see a variety of colour morphs in the clear tropical sunshine.


Spot the Heinroths Shearwaters in these photos..... 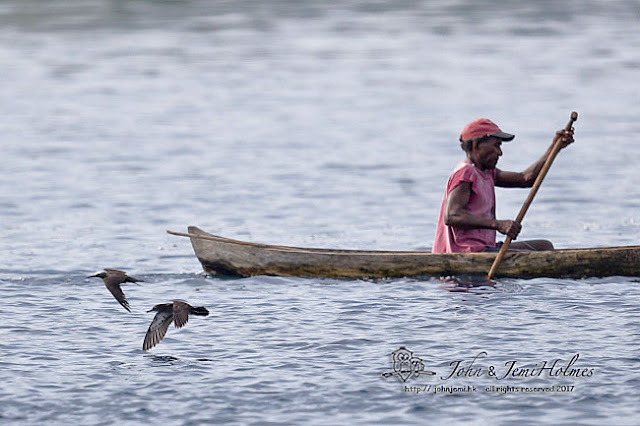 Often, a whole Noddy/Tern flock would rise, leaving the Heinroths Shearwaters behind, seemingly oblivious, their heads in the water.

We thought this might make them vulnerable and we were nearly treated to the sight of our target bird being taken by a White-bellied Sea Eagle, but the shearwater dived just in time...

(I'm aware that WBSE is not supposed to occur in the Solomons, but the white tail looks a good feature to me.) 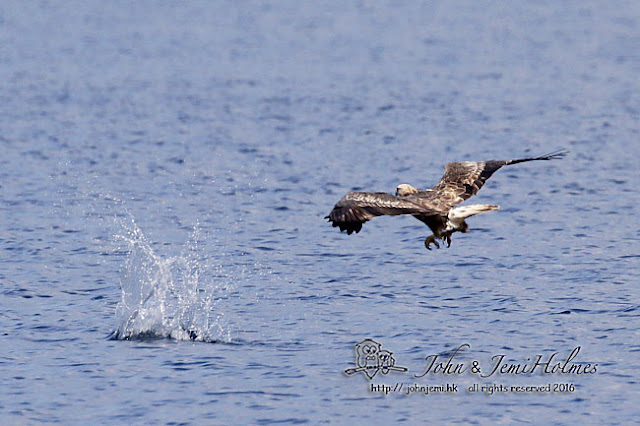 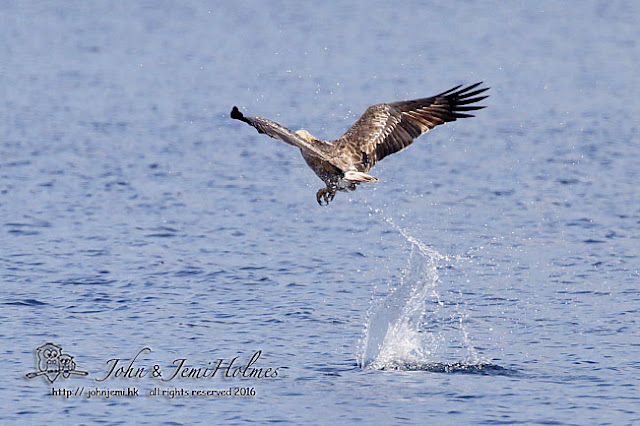 
It seems like there are a lot of things left out, but I'm going to wrap Part II (and see Part I) up now as a reasonably coherent narrative of how we spent 25 days in the South West Pacific.

Thanks again to our companions;

and our Yacht Sauvage hosts,  Sophie, Chloe and Didier Wattrelot.

Finally, a mobile phone shot of...