A “scarce spring passage migrant” in Hong Kong, so it was a pleasant surprise two find two hunting around the big trees beside the Police Post opposite the car park at Mai Po Nature Reserve.

The light was pretty awful, but if conditions had been clearer, then maybe they wouldn’t have been so low and visible.

Thanks to Jamie Partridge for spotting them first !

There was a flurry of activity yesterday afternoon on various “Whats App” birding groups - two Glossy Ibis had been briefly seen and photographed on the scrape (Ponds 16/17) Mai Po Nature Reserve.

Immature Glossy Ibis are described as “wanderers” in the bird books, and these two seemed to have wandered on.

However, this afternoon - 21st March 2019 - the very same person who had seen them at Mai Po, found them again, this time in Long Valley, where they lingered through the afternoon and were the subject of many mobile phone messages.

Long Valley is ten minutes from where I live, but first I had to collect Jemi, who was returning from downtown on the 978 bus. I scrambled into the car with bins and camera, and arrived at Choi Po Court just in time to pick her up.  Someone had kindly “dropped a pin” on the phone message group thread and the birds and attendant admirers were easy to find.

Long Valley's vegetable fields seemed to suit the rare visitors well, and they were actively foraging around the bases of the vegetation.

Both individuals are in non-breeding plumage, having light-streaked heads and necks, and actually, as can be seen here, look very similar.


Here's hoping they hand around a bit longer than the previous ones, which were one or two-day "wonders".

Today’s warm sunshine also served as a reminder that the main spring migration is coming....

These birds disappeared from Long Valley after Friday 22nd March, so weekend-only "twitchers" felt they had missed out.

However, there followed rumours of Glossy Ibis out at Nam Sang Wai from Wednesday 27th March.  It was true.

The Ibis pair have been present in the NSW area for the past four days, so previously frustrated twitchers have enjoyed a second chance to add Glossy Ibis to their HK lists.

These photos were taken at sunset on 28th March
Posted by John Holmes at March 21, 2019 3 comments: 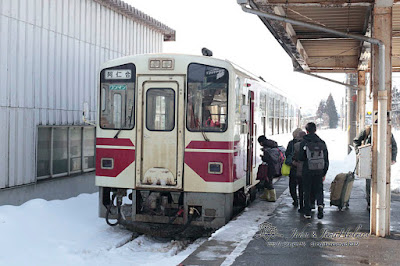 Friend and former RHKP colleague John Murphy had seen a documentary on British TV where Chris Tarrant travelled along the main Japanese island of Honshu on trains in winter.

Scenic train journeys seemed like a good theme for a non-birding trip, especially in February. Hong Kong has umpteen flights a day to Tokyo.

Neither of us speaks any Japanese, apart from “Beeru kudasai”. I had Japan by Rail (a Trailblazer Guide), and Murphy had the Lonely Planet guide, which is quite a big book.

Arriving late afternoon of Feb 14th, we had collected our Japan Rail Passes at the JR office at Narita Airport, and got tickets for the 09:48 train on the morning of the 15th.

The following morning, with a keen sense of anticipation, we boarded the airport hotel shuttle bus to return to the airport terminal and begin our railway adventure.

Our excitement highlight for the whole week followed. John M. left his rucksack on the hotel/terminal shuttle bus.  We found a help desk in the terminal and the ladies got a message to the bus driver. After the bus had done another circuit of the terminals and hotels, John got the bag back, contents all correct.

Due to the rucksack delay we’d missed the 09:48 train and had to book another.  The JR office staff were very patient and helpful to a procession of clueless foreigners like us. The 10:48 “Narita Express” to central Tokyo was soon due to depart from downstairs, and - after new tickets had been issued - one of the staff led us to the right spot on the platform with moments to spare.

By 12:20 we were on board a shinkansen heading north.  It was a grey “it’s-about-to-snow” kind of day, so we failed to spot Mt Fuji as we left Japan’s capital.

At Morioka the train hung a left turn and we crossed into the mountains along the spine of Honshu.  There was a lot more snow on the ground.

At our destination - Kakunodate we had enough time before dark to visit the old section of town, with 300-year-old Samurai buildings.  Most were closed and snowbound, but the area was very picturesque. 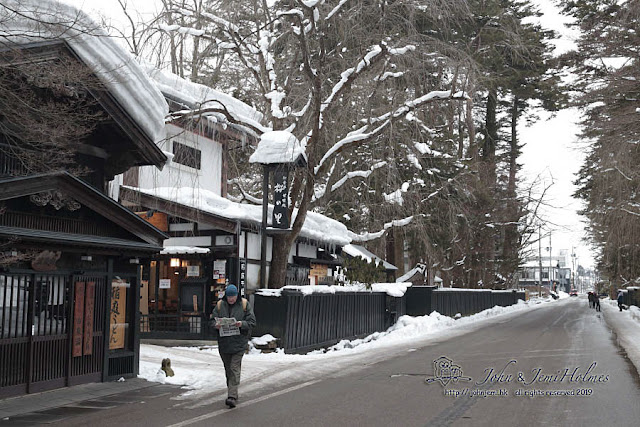 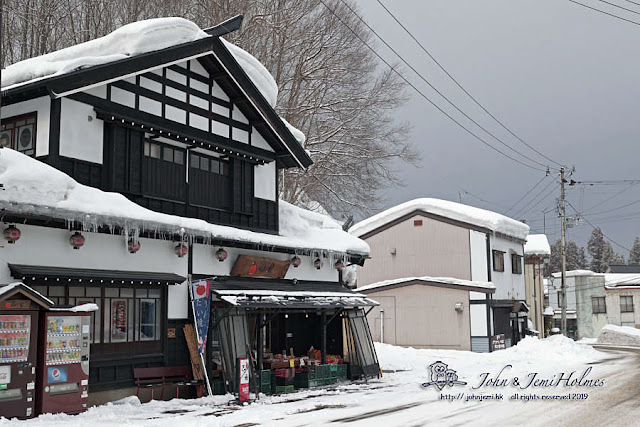 A privately-run line that was originally built to service mines in the hills. As a tourist train now, they have snow in the winter, tree blossom in spring, hiking and fishing in summer and leaves in the autumn.

I had the impression that “leaves on the tracks” wouldn’t faze them at all, unlike some railway systems I can think of. 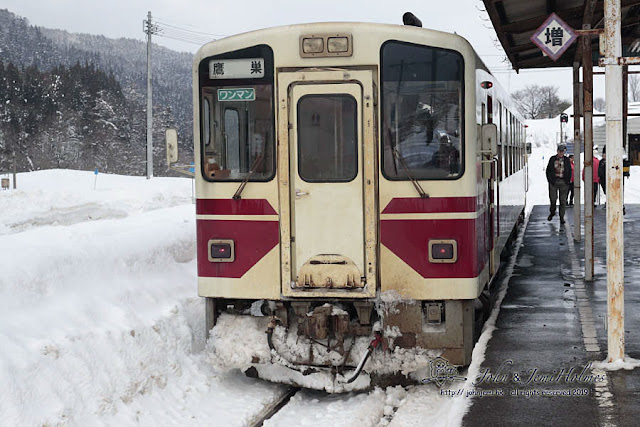 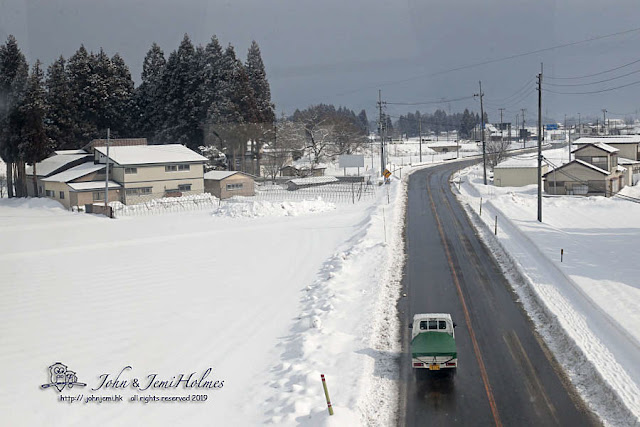 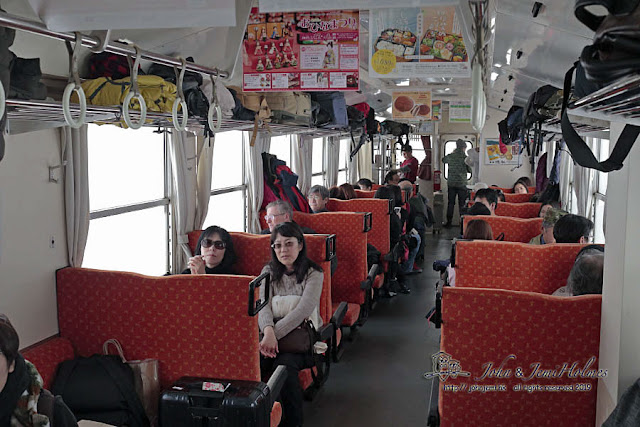 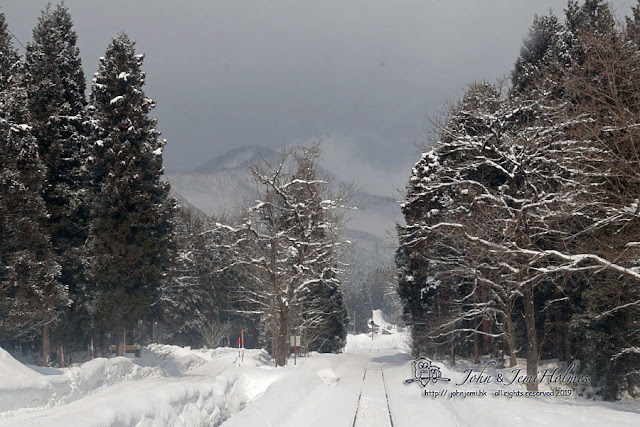 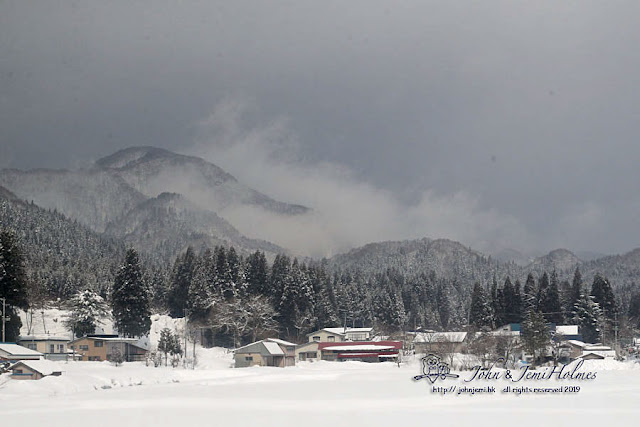 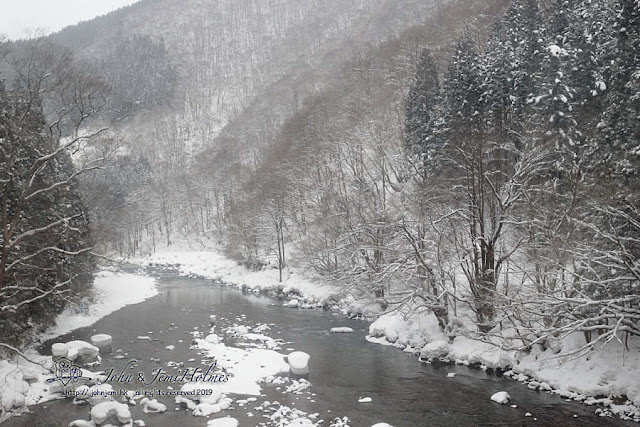 An east-west Japan Rail line runs to Honshu’s west  coast, and we were at Akita a couple of hours later.

Akita train station has several exits, and the one we blundered out of was not near the JR booking office, but in a shopping mall.  A young woman from a desk at which concert tickets could  be booked led us round to the JR office.
There, a female JR official helped us book tickets for the following day.

We hadn't booked ahead, but at the Tourist Information office opposite, a very helpful member of the staff telephoned around the nearby hotels until a vacancy was found. She said "I'm not supposed to book hotels, but I can take instructions from you".

We had only been in Akita an hour, but here were three examples of people being really helpful.

A five-hour journey from Akita to Aomori, with some spectacular coastal views. 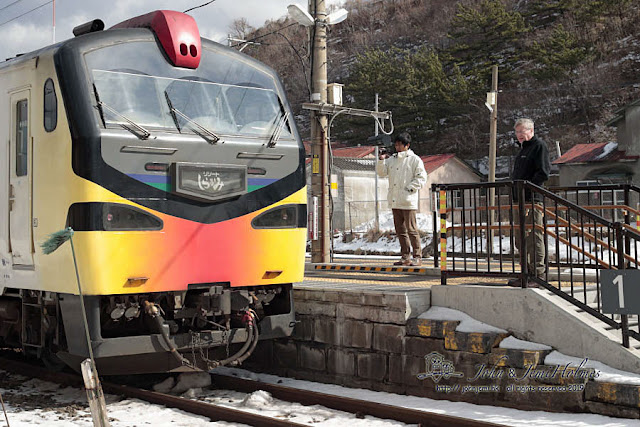 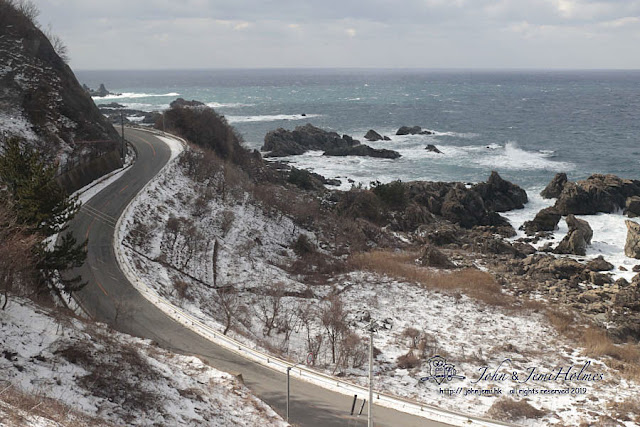 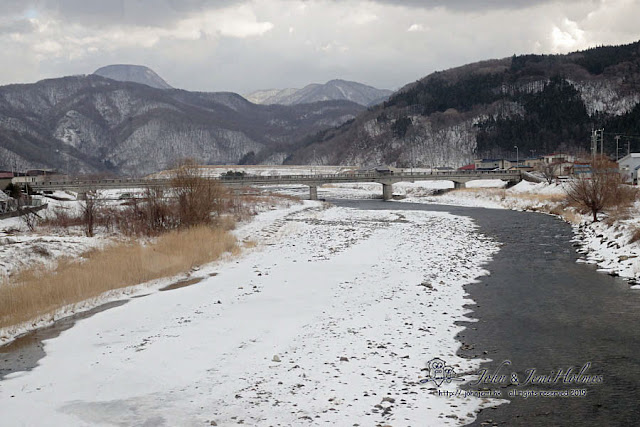 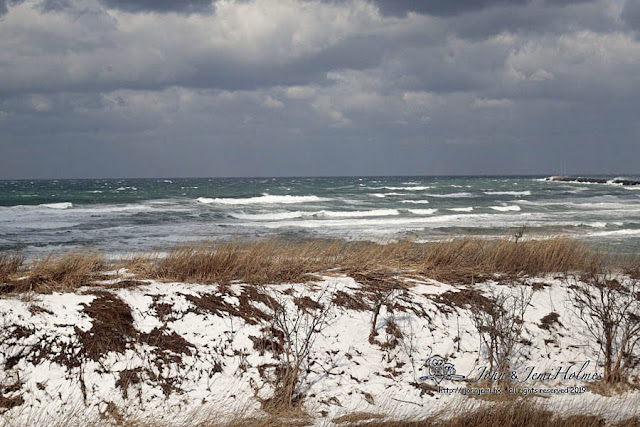 At Aomori we had only to cross the platform, wait a few minutes and we were on another Bullet Train, on our way through the world’s longest train with an undersea segment (the Seikan Tunnel) to Hokkaido.

We did what most tourists, it seems, do - got the cable car to the scenic lookout at Mt Hakodate above the city. Sunset seems to be the busiest time up there. 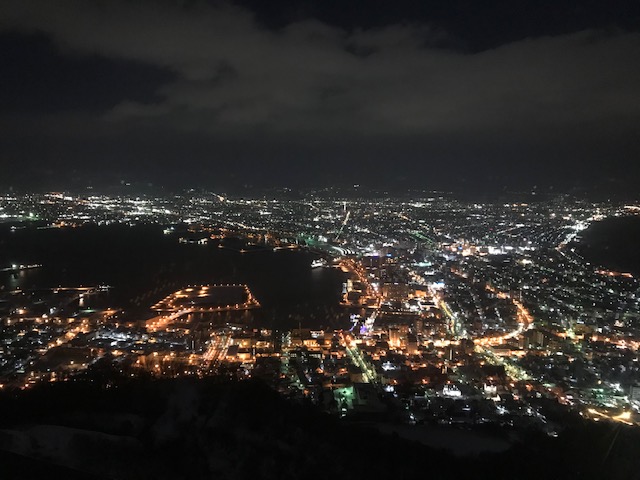 
A historic coastal city, its heyday perhaps when Meiji-era Japan was expanding its northern frontier, to response to a threat from the Russians. 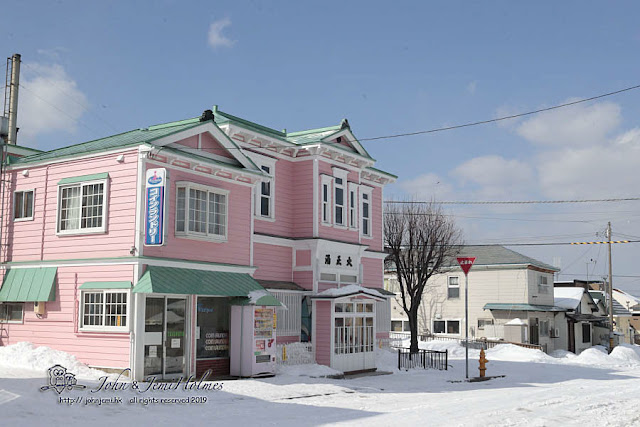 We met up with Stuart Price, author of the blog "Hakodate Birding" who recommended a visit to Abashiri. 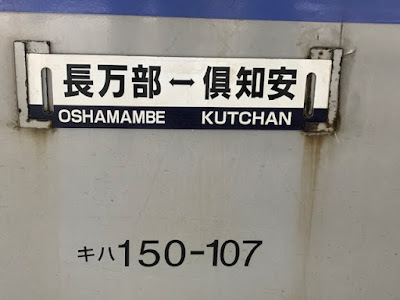 Meanwhile, we took a clockwise circuit to Otaru, (near Sapporo) stopping at Oshamambe and Kutchan. More snowy scenery and a relaxed atmosphere. 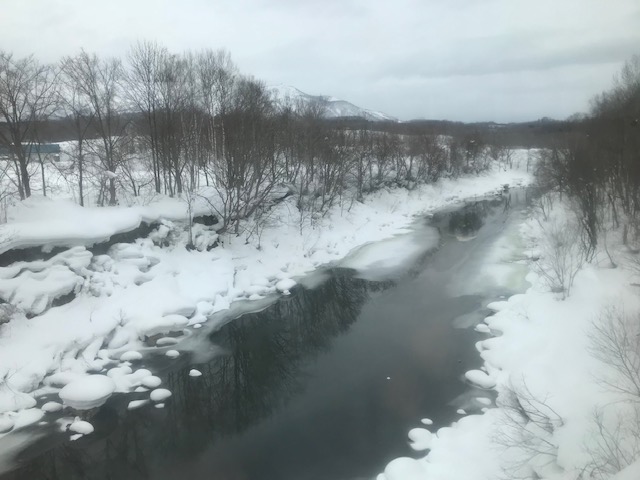 On the train were a variety of foreign skiers, who had mostly come direct from Tokyo. We learned a new word - "Japow", meaning "Japanese powder snow".  The skiers and snowboarders got off along the way.

We continued to Otaru, another historic port, with many Mandarin-speaking tourists. 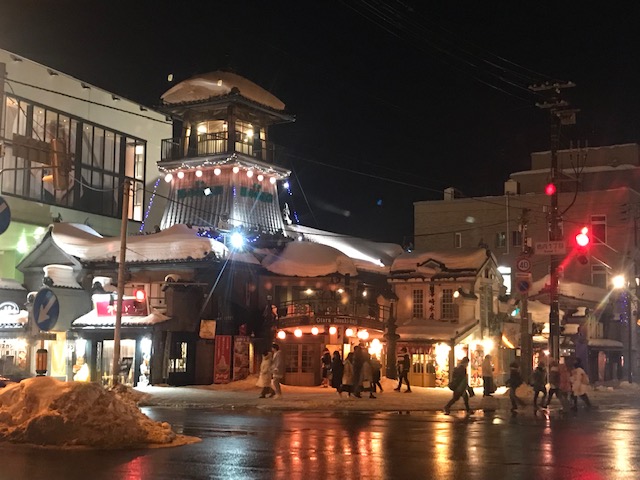 Seven hours northeast of Sapporo on the train, Abashiri is on the Sea of Okhotsk. Sea ice is a big tourist attraction in late winter.. 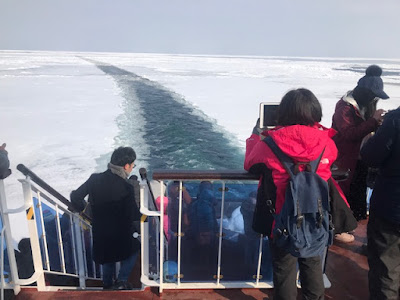 There were some birds to see at Abashiri, although most birders do similar trips from Rausu, further east.

Our evening return train to Sapporo was unexpectedly, over an hour late. When we got there we found out why -

With two more full days in Hokkaido's largest city, we found the Nikka Whiskey distillery at Yoichi was well worth a visit...

It has an interesting company history, - free admission and free whisky samples were all part of the fun. 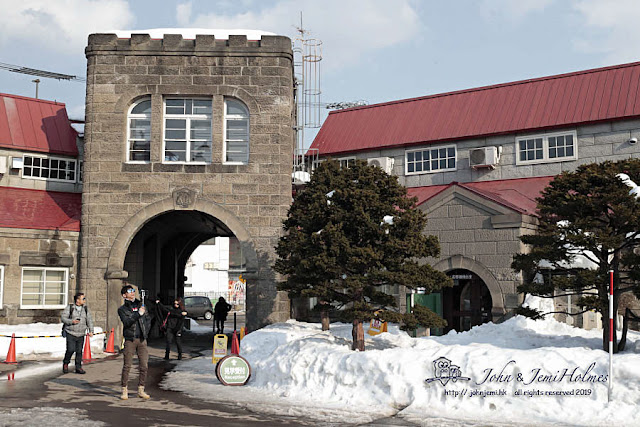 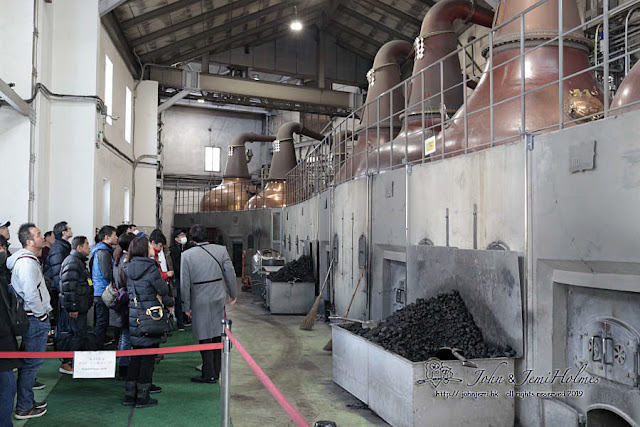 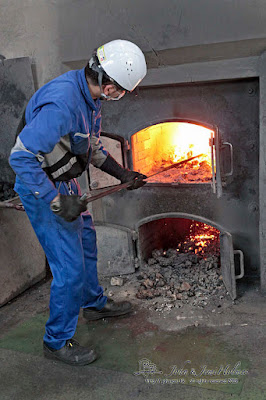 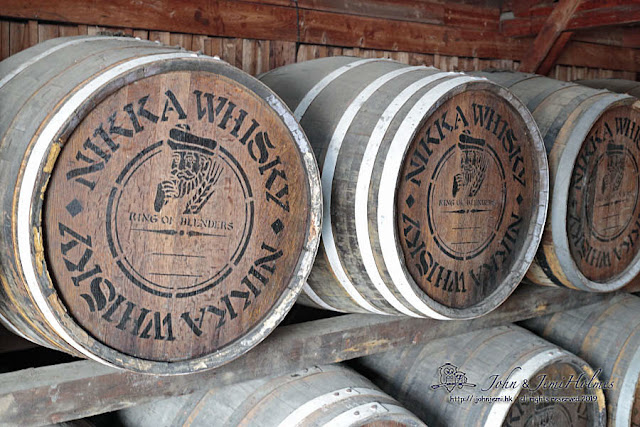 We also tried a couple of vintages that we paid for (but not expensive..) 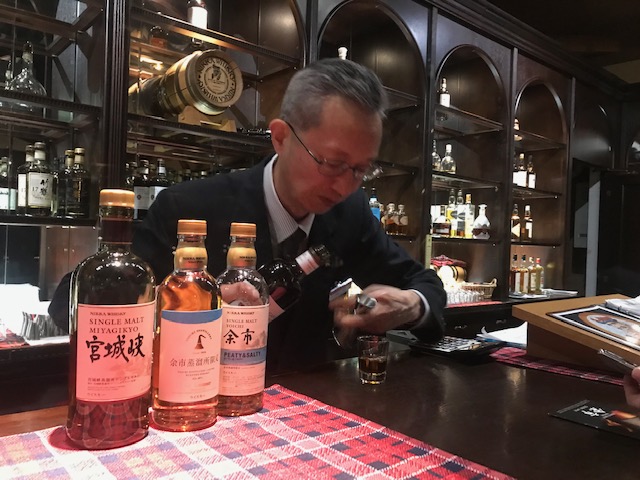 Back in Sapporo, we found a gathering of people behaving strangely with their mobiles....and then realised they were playing "Pokemon Go". 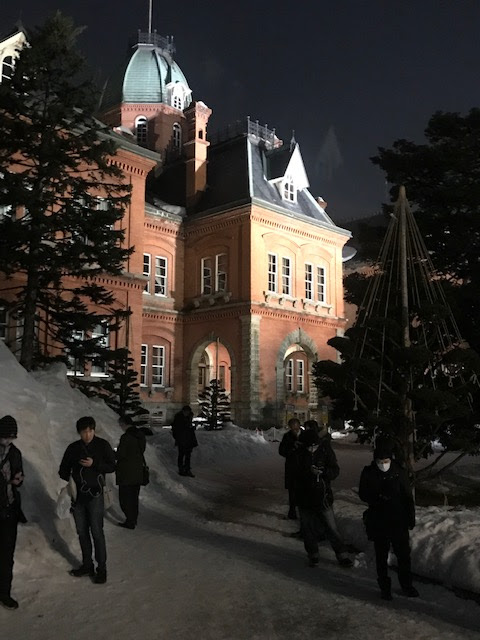 At the recommendation of someone in the tourist office we acquainted ourselves with the delicious cakes at Donguri Bakery.


Scene of our last dinner of the trip - 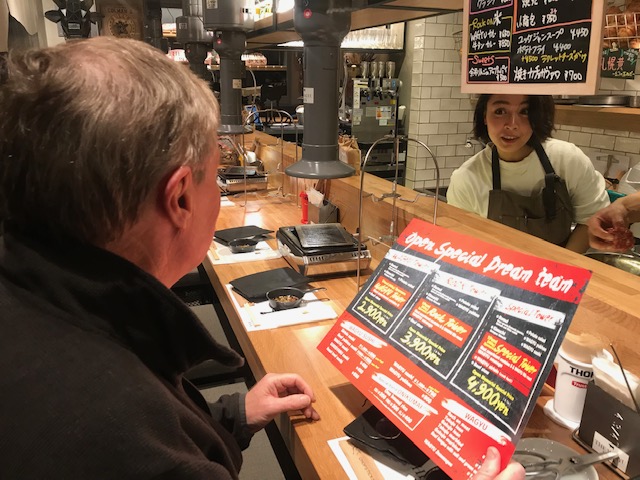 - and a final chance to sample some more local produce ! 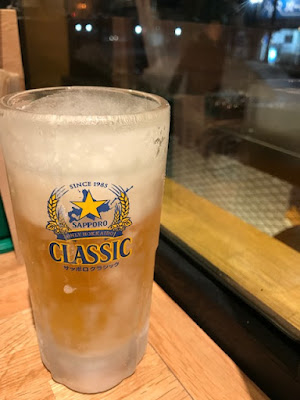 It seemed appropriate to finish our trip with another train ride in the snow.
Posted by John Holmes at March 17, 2019 4 comments: