Something in the Air - mostly at Mai Po

This post has nothing to do with the late, lamented "Thunderclap" Newman.

No, the title is about trying to establish a common theme for this post's photos...


There !    Mai Po has always got some variety.

Here in HK we are generally too far south for geese.  There can be thousands of them 800 km north of here, along the Yangtse River at sites like Dongting and Poyang Lake.

So it’s always a thrill to see a goose.   On hearing that there was a Greater White-front on ponds 16/17 at Mai Po I went straight there.  Having arrived at the MP car park, I got a message that three geese were also showing in the ponds at San Tin.

Three seemed more alluring than one, so I decided to go to San Tin.

A pin on an electronic map via WhatsApp should have been enough, but I overshot the spot and needed verbal directions back.  There they were, casually nibbling the grass on the bank of a drained fishpond.

Anyway, two adult Greater White-fronted Geese and a juvenile showed well for just over an hour. We wondered whether they had arrived with the fourth White-front which was simultaneously a couple of kilometres away in Mai Po.

Eventually, our distinguished visitors got alarmed at something on the other side of their drained fishpond and took off, and to my knowledge, have not been seen since. 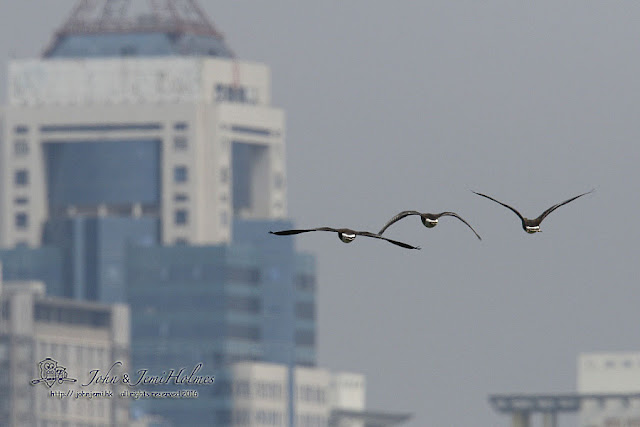 It was fun while it lasted.

Postscript :  Actually, the geese were seen again and again on the very same pond for at least ten days !
Posted by John Holmes at October 13, 2016 6 comments:

A Little Curlew at Mai Po

Little Curlew is a vagrant that is often found on open patches of grassland, - strangely, not a common habitat in Hong Kong.

This one should be on its' way to spend the northern winter in New Guinea or Northern Australia.

And here's a Whimbrel for comparison...

There were quite a lot of distant Garganey (passage migrants) between the hides as the tide rose.

Avocets will mostly be returning winter visitors - but a very few oversummer, anyway


A small and distant group of terns gave pause for thought - late on autumn passage, but Common Terns..
Just a couple of hours at the boardwalk today, and plenty of variety.