A sunny morning (September 24th) and a falling tide at the boardwalk hides at Mai Po.

It seems that the birds are never as close on outgoing tides, and a lot of these photos are big crops.

Photos displayed in the order they were taken.... 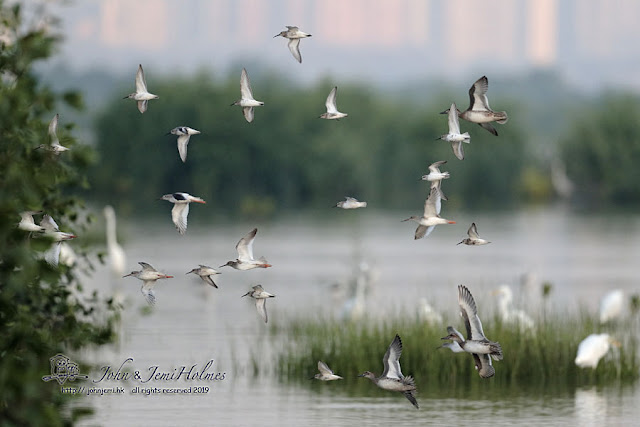 England’s cricket series against Australia (“The Ashes”)  finally came to an end, and messages on Local WhatsApp groups reminded me there were some autumn birds to be found here and there.

A rising tide at Mai Po yesterday morning impelled me to make the effort to get out to the boardwalk hides, even though it turned out to be a hot, steamy morning.


I was surprised to see the mudflat covered with so much seagrass and sonneratia mangrove, but then I hadn’t been out there since mid-May.

For the time being, the greenery makes an interesting backdrop to the waders as they fly over the hides on their way to the centre of Mai Po Nature Reserve, but some “gardening” is going to be necessary soon.

The Black-faced Spoonbills have been over-summering - HK’s migrant BFSs and wintering population will not start arriving until mid-October.

A variety of waders then - these are just a few of them.

A Grey-headed Lapwing loitered on Ponds 16/17.

And nearby, a first-winter shrike that is probably a Brown Shrike, but I’m still not 100% certain.

And, apologies in advance that I don't seem to be able to reply to comments on my own blog...I'll keep fiddling with the settings.
Posted by John Holmes at September 18, 2019 2 comments: