So there you have it, pure luck.

But, as Gary Player (the golfer) once said; - "The harder I practice, the luckier I get.."

Found by Ivan TSE of the HK Birdwatching Society this morning on Ponds 16/17 Mai Po Nature Reserve.  This Critically Endangered Species is "difficult" to find here in spring, and even rarer in Autumn.

Yesterday (Sept. 20th) there were about sixty Great Knot on the outgoing tide.


And - as a useful comparison - three Red Knot were close to the hide, here is one of them

In the bay, though, the most noticeable Great Knot was struggling for it's life in the retreating tidal waters while a Peregrine tried to pluck it out of the sea. 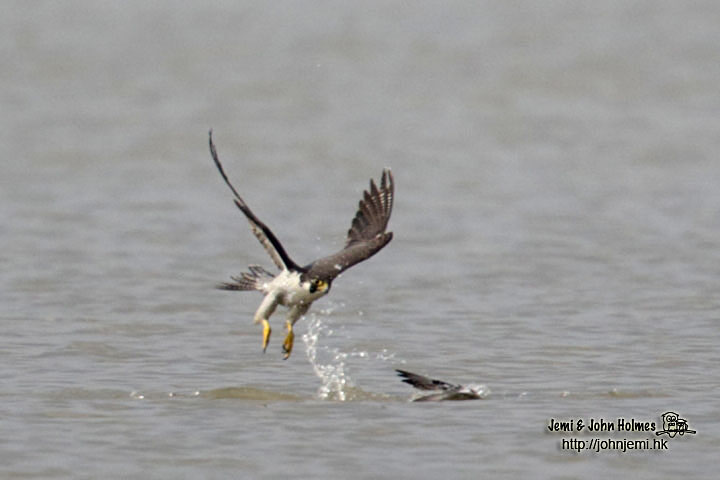 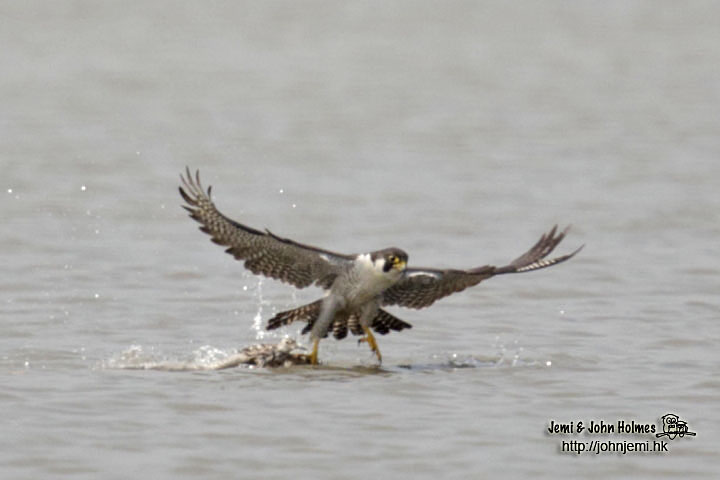 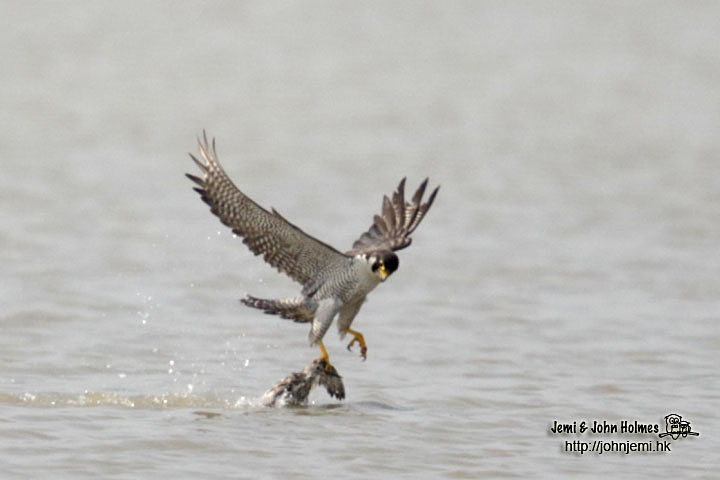 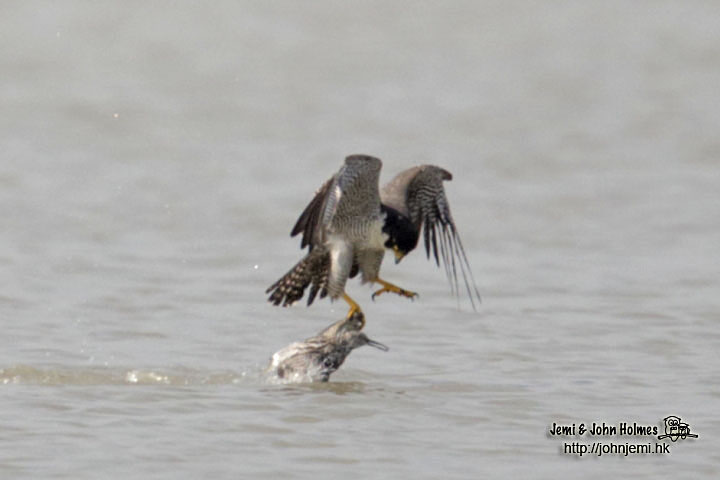 The Great Knot moved closer to one of the old marker poles and this disturbed the rhythm of the swooping raptor. 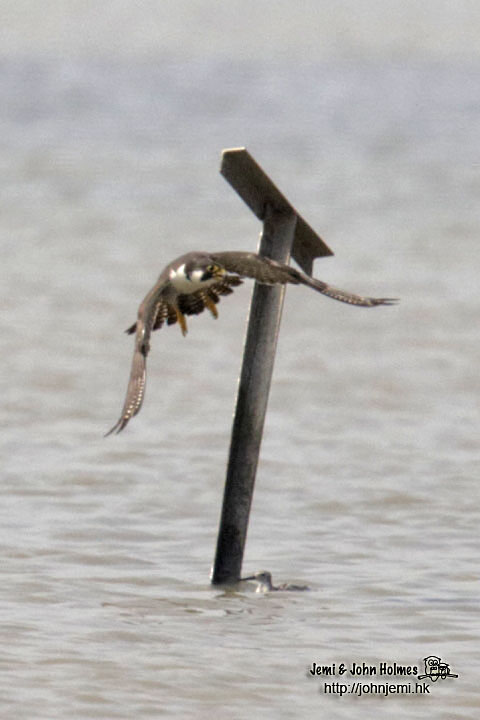 And, to our surprise, eventually the Peregrine gave up and flew away.

I've done this before but this is a "HK-border-with-Shenzhen" photo…  where the foreground is Hong Kong, and the city in the distance is Shenzhen, our nearest mainland neighbours.

The main reason for lack of development on the HK side was the "Frontier Closed Area" - a restricted Zone that was created in the early 1960s and lasted until well after the handover.

Even though there are development plans now for the HK side, there are still a few wild corners, and a few wild occupants, such as this Wild Boar, photographed earlier this month.


Further east along the land border, Kong Shan Police Post towers on a hilltop near the village of Lin Ma Hang.  These posts are informally know as "Mackintosh Cathedrals" after a Commissioner of the Hong Kong Police in the early 1950s.

But, the post, in turn, now seems to be overlooked by luxury flats on the Shenzhen side of the border.

Once upon a time, would-be illegal immigrants used to sit on the Chinese mountainside opposite this post (and the six others like it) and wait for darkness to fall before making their bid to cross the Hong Kong Border Security Fence.

Anyway, that's enough travelogue. As this is supposed to be a blog about birds, a couple of shots of Grey Treepie.  Like most corvids, they are clever and alert.

These are the best shots I've managed so far of this species, but, obviously, there is plenty of room for improvement !

Not found by yours truly, I must confess.  This bird was seen on Po Toi Island on Sunday 7th September, and again on Tuesday 9th.

Some photos by Allen Chan are on the HKBWS website here:

The bird was reported to favor a small area of wooded hillside and so it seemed like a good idea to go and have a look for it again today.  About twenty Hong Kong birders and photographers had a similar idea ("Great Minds…") and the ferry trip to Po Toi Island was quite a social occasion.

I was lucky to walk right up behind some eagle-eyed types who had just found it.


In front of an admiring audience, the drongo made short work of a succession of Stink Bugs, Lychee Bugs and a Cockroach.

The spotting indicates that it is a juvenile.

Crow-billed Drongo occurs in S.E. Asia, and Yunnan, Guangxi and Hainan Provinces in China.  There are one or two records from north Guangdong, too, but this is the first to be seen in Hong Kong.

A memorable bird, and ideal conditions for a "Twitch" !


Last here, but not least….


Autumn migration is never as gripping as spring, but at Mai Po, there's always something to look at !
Posted by John Holmes at September 07, 2014 3 comments:

Not a species seen very often by me, but reports are regular in Hong Kong. The Water Buffalo on Mai Po's Pond 24 were suitably impressed. 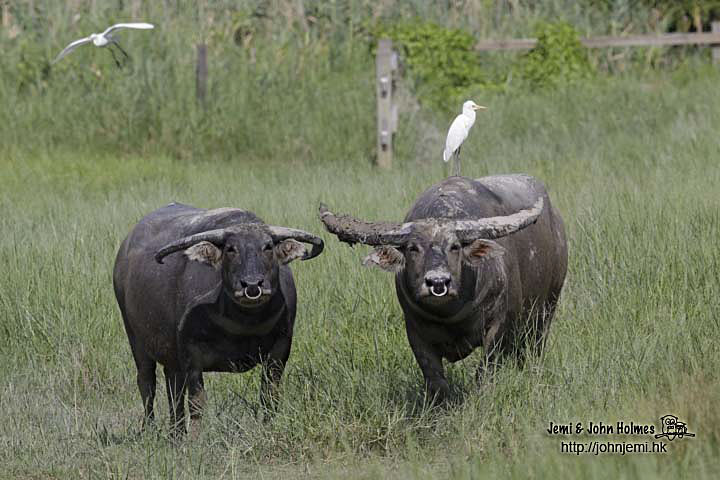 Out on the mudflats, a few southbound Whimbrel can be seen in late August..

For wader fans, there were also a few Asian Dowitchers dotted around, often associated with Black-tailed Godwits

Most wildfowl won't turn up until the end of October, so the appearance of this Ferruginous Duck in mid-August was strange.  It's been a big favorite of photographers here…

So I can say "large as life" but maybe not "twice as natural" !