Leaving the Ogasawara Islands behind us, we sailed 330 km south southwest to the Iwo (Volcano) Islands.

The central island of the small chain, Iwo Jima, has one of those place names that resonates with one event in its history.  The WW 2 battle site still has a military air base, casual access is forbidden, and there is an “exclusion zone” around the island.

We were heading 30 km further south. On the morning of May 6th we arrived off Minami Iwo Jima (“South Volcano Island”) and were greeted with a rainbow. 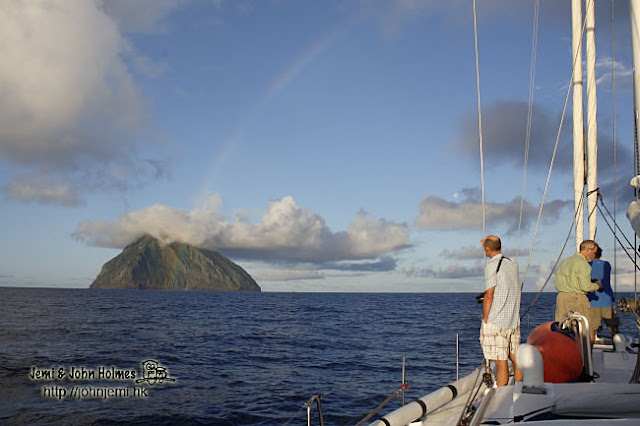 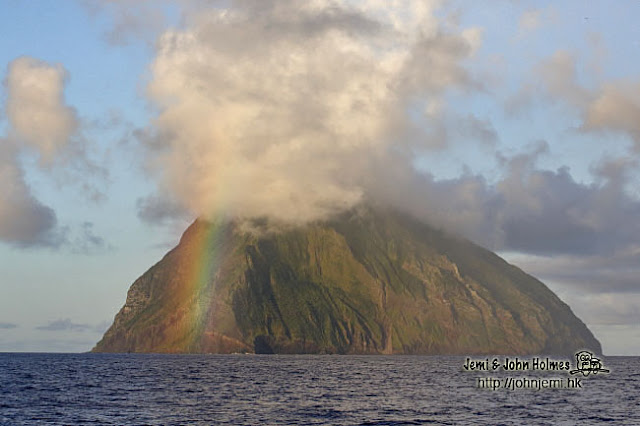 We circled the island once to “take it all in”. As can be seen from the introductory photos, the island - a designated Nature Conservation Area -reaches straight out of the ocean at a 45 degree angle.  The summit, at 916 metres, is the highest in the whole chain of islands stretching back to Tokyo, and is often capped by its own patch of cloud cover. Too steep for any human activity, Minami Iwo Jima has never been settled by humans and is a breeding ground for many different species of seabird. 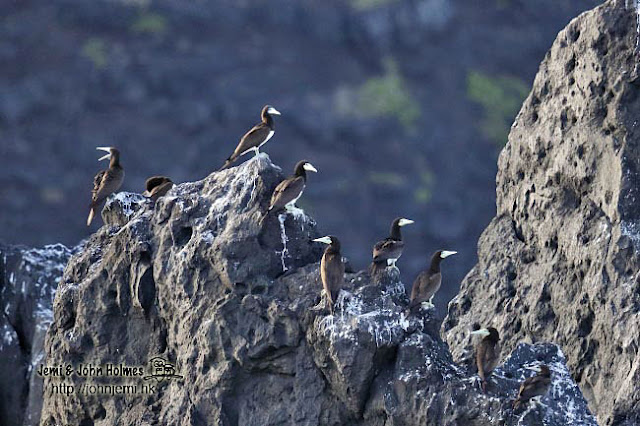 There was a sizeable party of Brown Boobies on rocks at the foot of the island, and the occasional fly-by bird with a breeding flush of blue. 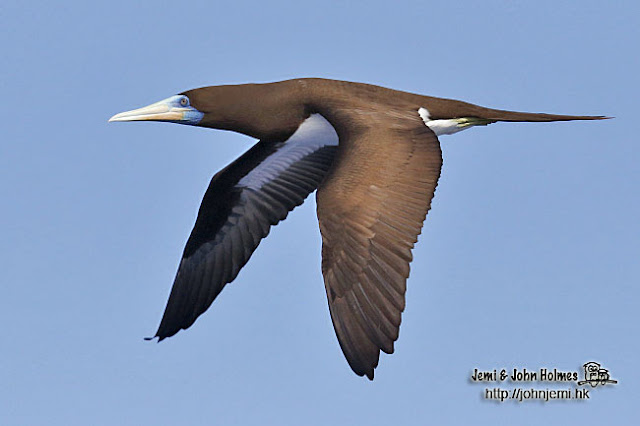 Higher up, there was a breeding colony of Red-footed Boobies. We encountered a small pod of Bottlenose Dolphins, but they didn't hang around. 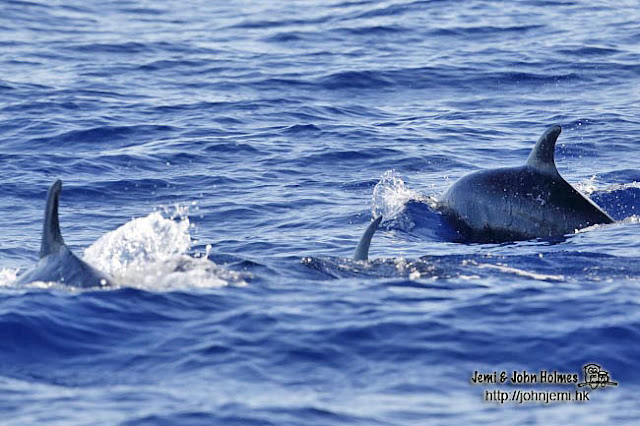 The slopes are also a site for breeding Red-tailed Tropicbirds, here at the northern edge of their range. 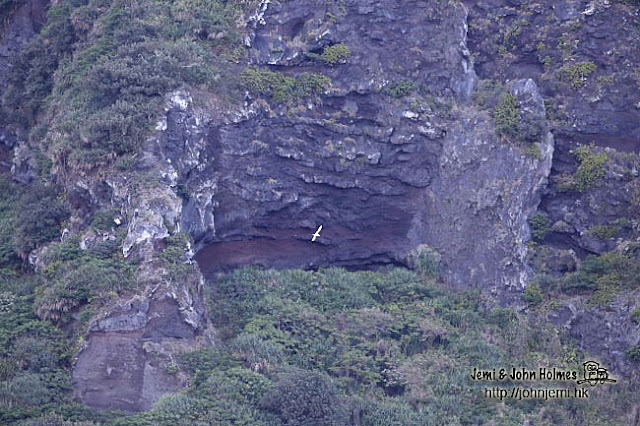 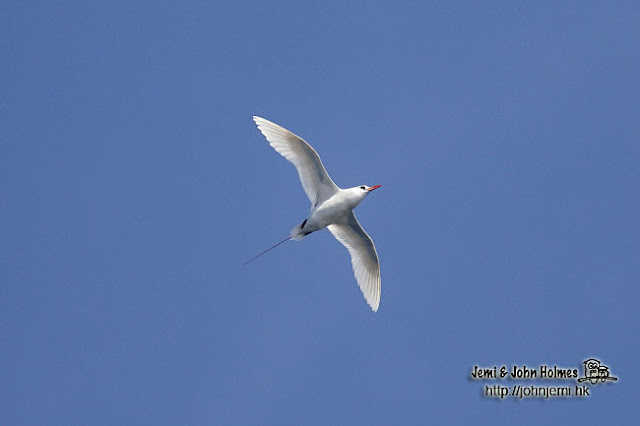 With a variety of seabirds crisscrossing the water, we went southwest of the island and saw two or three distant Bannerman’s Shearwaters returning to the island in the late afternoon. 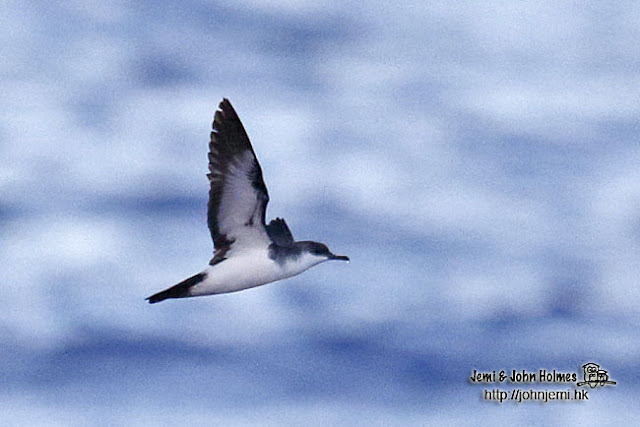 Over the next three days we saw a few dozen more of these Endangered birds each day.  They paid little attention to the boat. 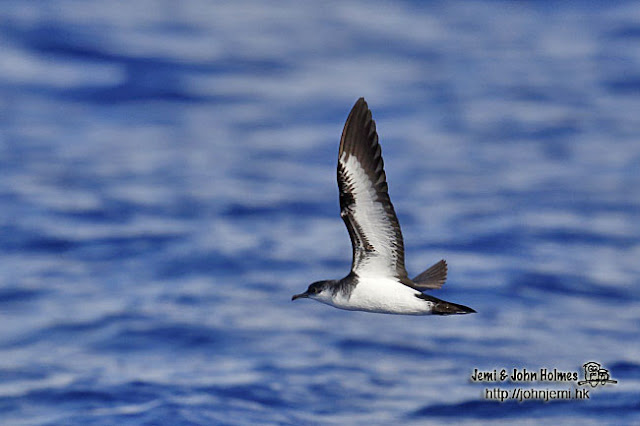 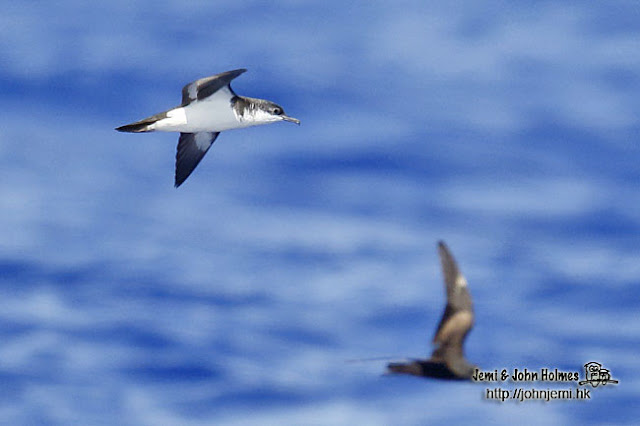 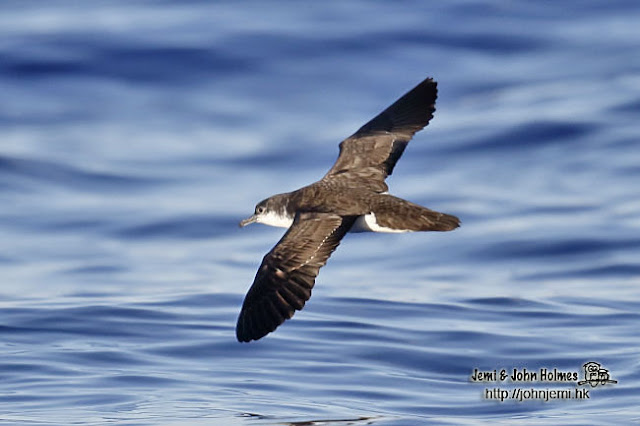 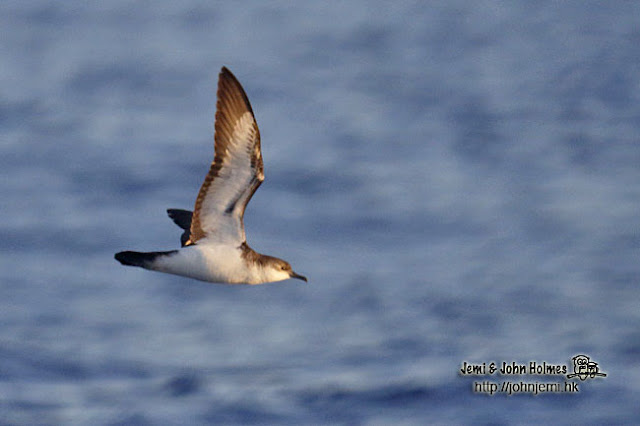 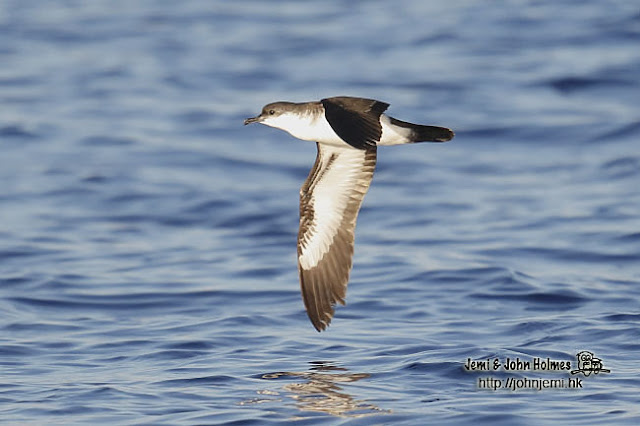 As pointed out by Chikara Otani in his paper in Birding Asia 16, the illustration and description in Albatrosses, petrels and shearwaters of the world (Onley and Schofield, 2007) for Bannerman’s Shearwater is quite wide of the mark.

Most shots we got were flight shots, but we did sometimes get views of birds on the water, such as here. 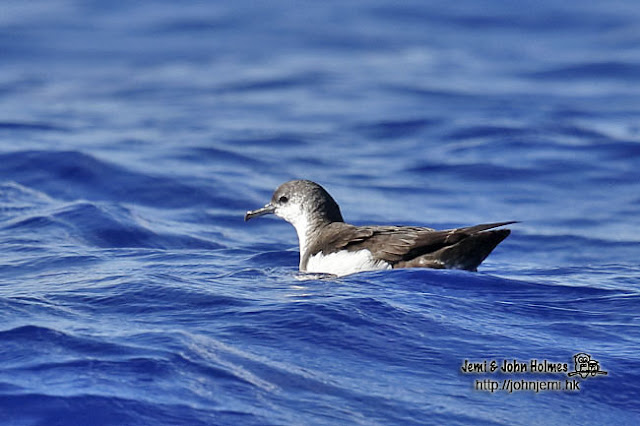 Bannerman's Shearwaters were outnumbered by the larger Wedge-tailed Shearwaters in the area, both in the air and on the water. 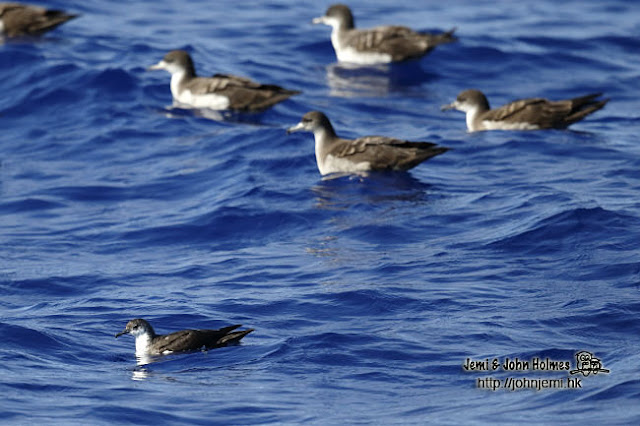 Despite the effort put in, we didn’t encounter Bryan’s Shearwater - the obvious conclusion being that they must be very rare indeed, even in comparison with species like Bannerman's Shearwater. 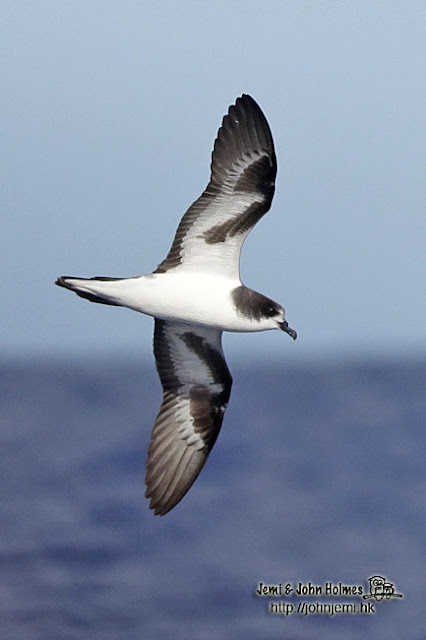 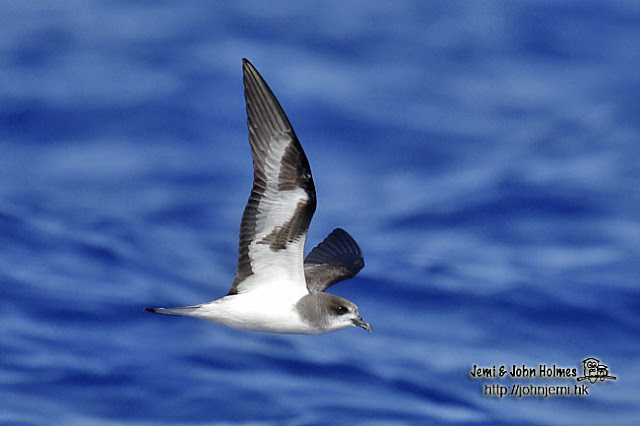 And wherever we went, the island was always in view, sometimes up to 50 kms away. 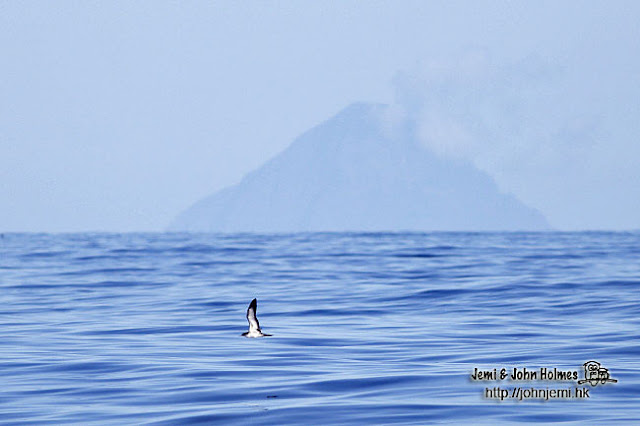 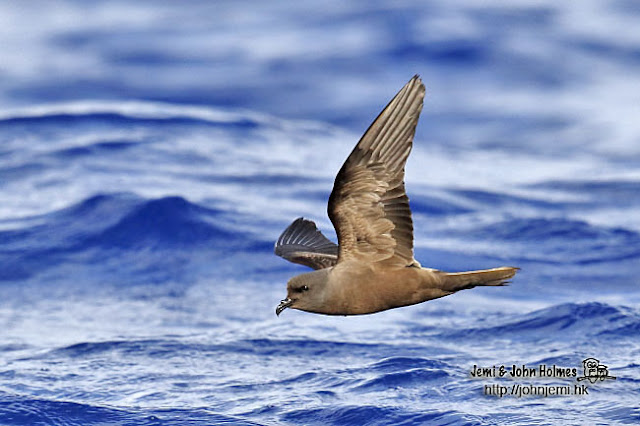 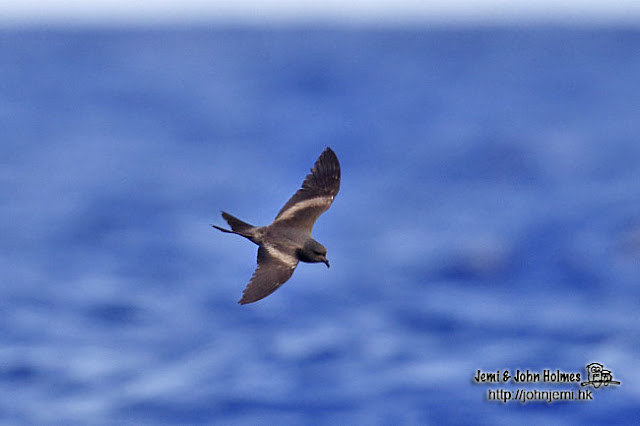 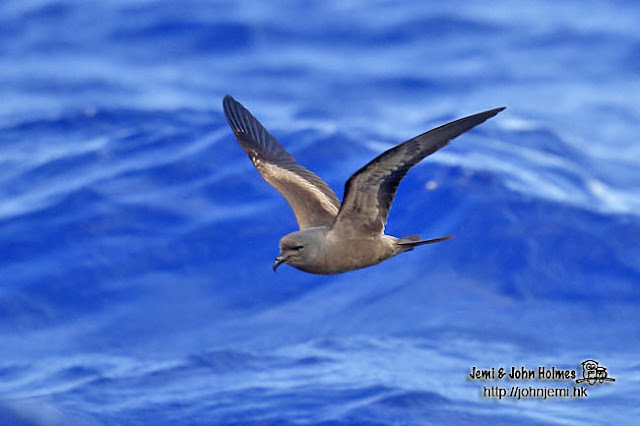 although Matsuadaira’s were far more numerous. Minami Iwo Jima is the only place Matsudaira's Storm Petrel is known to breed. 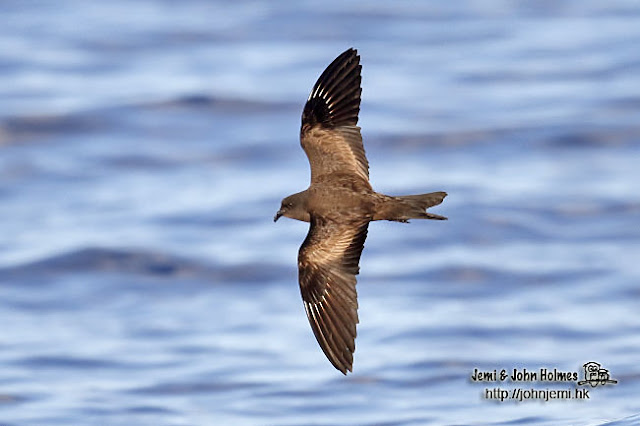 Only one or two Flesh-footed Shearwaters showed themselves daily, here’s one with a couple of Matsudaira’s. 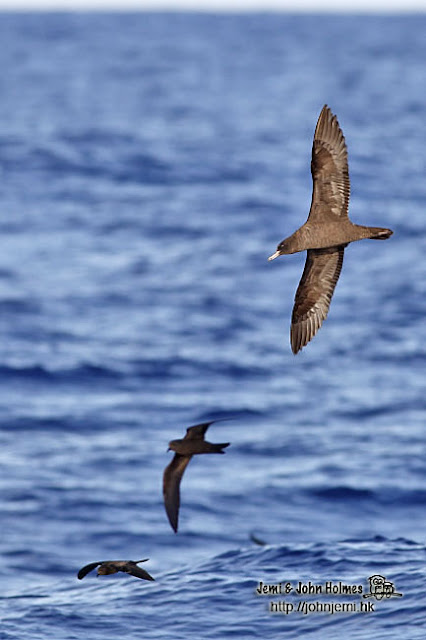 We knew we’d been fortunate with the weather conditions up to this point, but my lasting impression was of a place where the sunsets…. 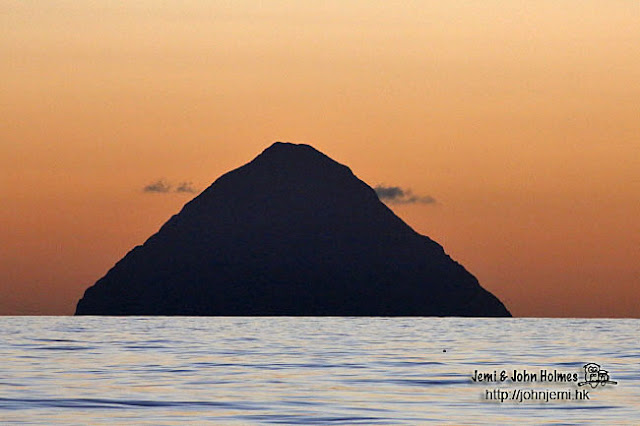 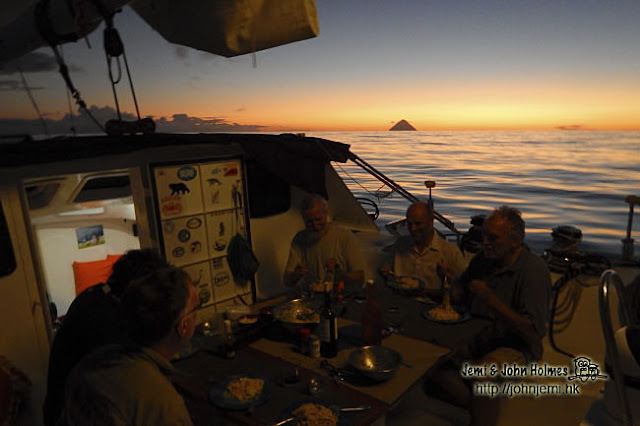 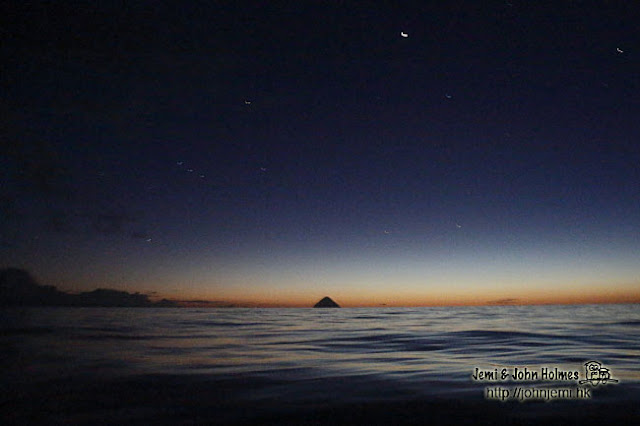 just seemed to go on forever….