The Ogasawara (formerly Bonin) Islands are named after Ogasawara Sadato, one of whose descendants claimed he had discovered them in 1593.  Wikipedia has an interesting account of the history of these islands here:-

With ferries from ports near Tokyo, these days tourists visit for the clean, subtropical breezes and other natural charms of the area, such as dolphins and Humpback Whales. There is plenty of sport diving in the area, too. 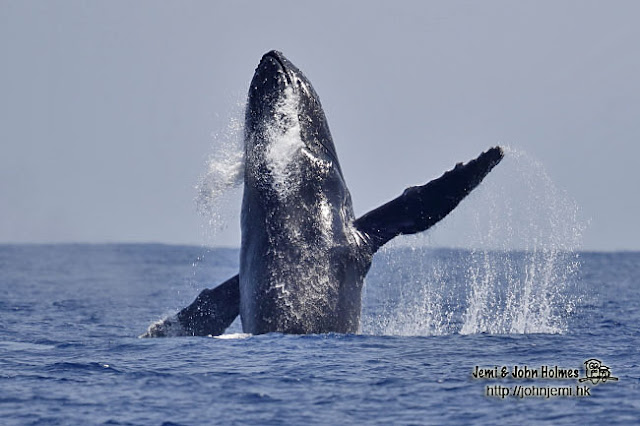 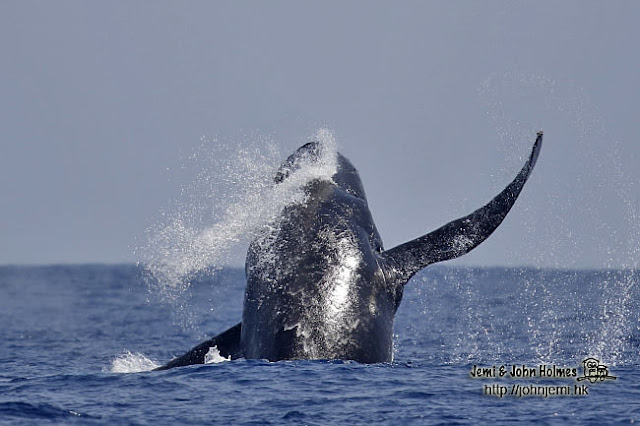 Fortunately, this Humpback was a good distance from the boat. It did us the courtesy of breaching three times, so we all got a chance of a photo.

Being close to the edge of the continental shelf, and an area with many rocky islets, the whole Ogasawara island chain is good for seabirds, too. 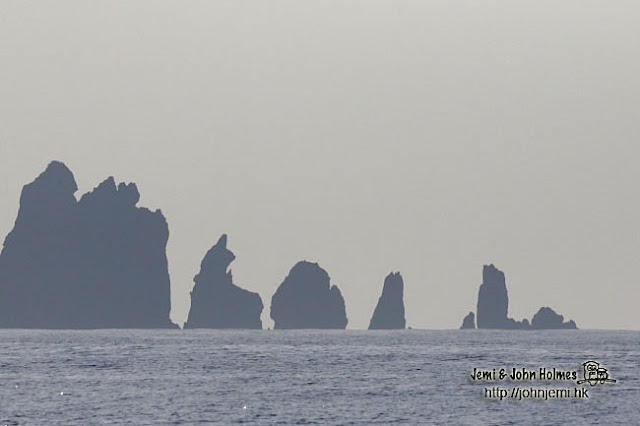 More frequent sightings of Bonin Petrel meant we were getting closer to the main islands, Chichijima and Hahajima. 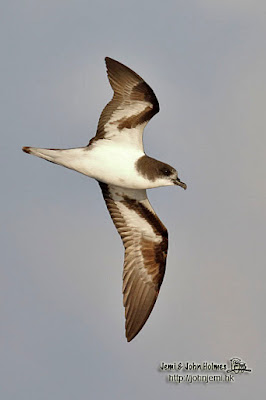 Our route was planned with locally-breeding seabirds  in mind, with our two sought-after shearwaters, namely Bannerman’s and the newly-discovered Bryan’s Shearwater topping the list. With these in mind, we arrived off the islet of Higashijima (literally “East Island”, just off Chichijima) in the early evening of May 3rd.

However a full moon had already risen, and there were no “rafting” seabirds waiting to fly back to their burrows. In fact a search of the seas in the area revealed that there were hardly any birds around at all. 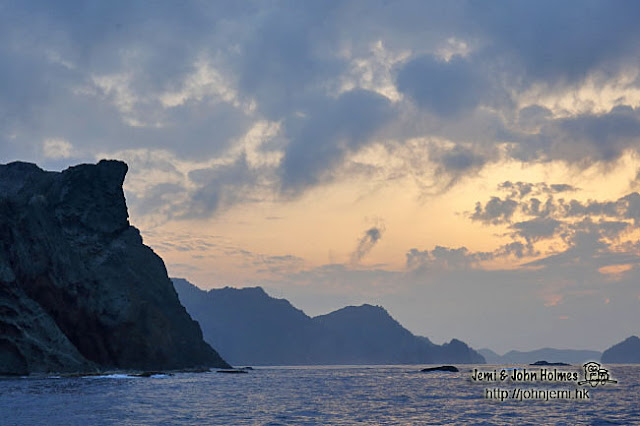 We had no intention of trying to land on the island itself to go looking for them. Obviously, crashing about on an active seabird colony would have been totally out-of-order. So, shearwaterless, we sailed overnight to Hahajima, 80 km to the south.

We had scheduled a morning ashore. 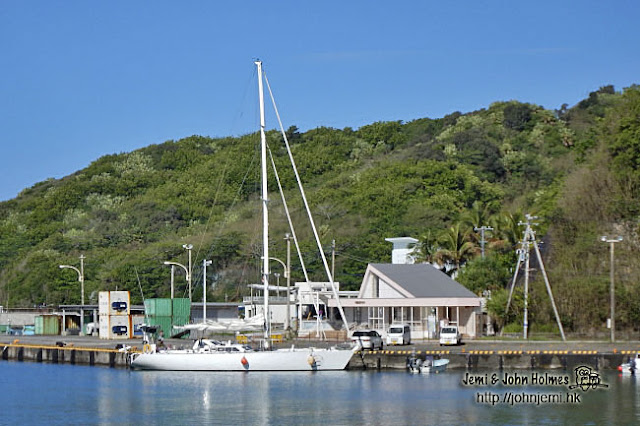 Back in the 1980s I had a copy of the WBSJ  Field Guide to the Birds of Japan and was fascinated by the island endemic then known as Bonin Honeyeater. Hahajima was the island to see it, but I wondered if we would have to do manly hikes all over the island in order to get a glimpse of one.

I need not have worried. A few yards from the quay was a grassy bank where a pair of Bonin Honeyeaters were collecting nesting material. 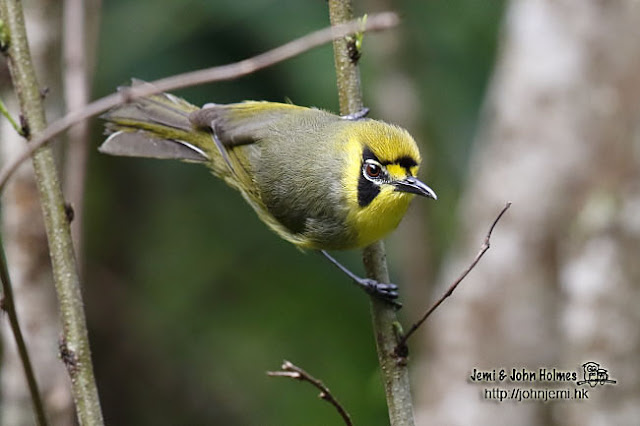 One flew across the road and picked at the ropes on a boat parked on a trailer. 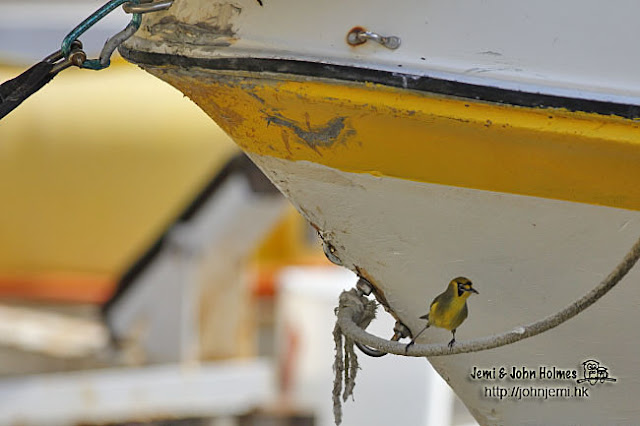 Elsewhere, the local races of Brown-eared bulbul, Oriental Greenfinch and Black Woodpigeon were present, as were several Blue Rock Thrushes.... 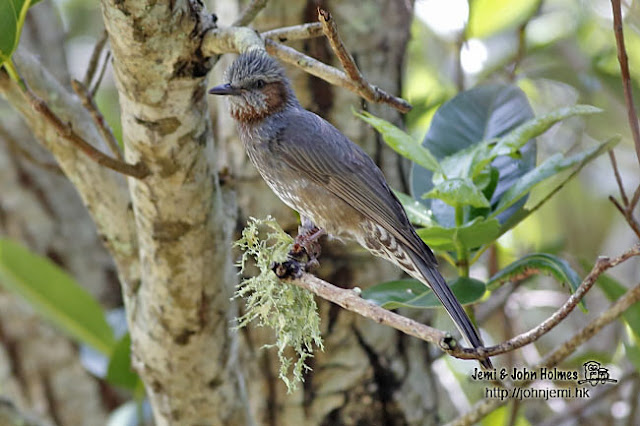 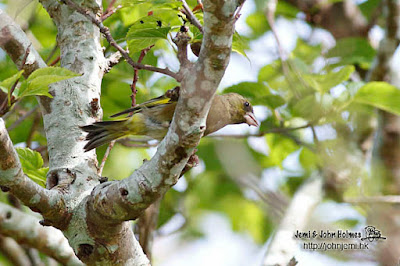 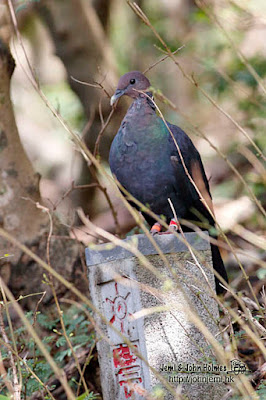 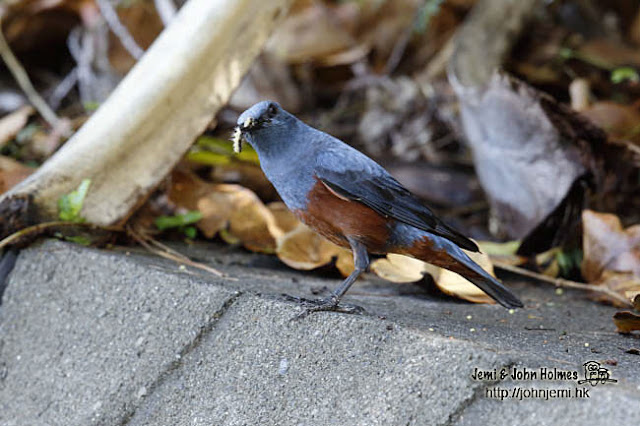 Replete with souvenir Hahajima T-shirts, (motto: “Not civilised but excitable”) we returned to the Sauvage. 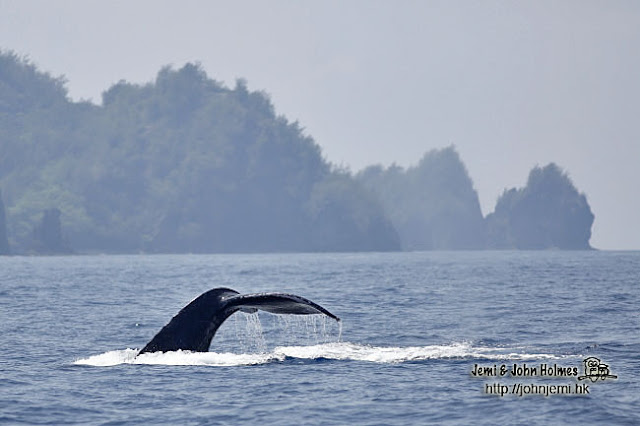 In the late afternoon we had a welcome example of "visible migration" with these Ruddy Turnstones heading for the islands we had just left. 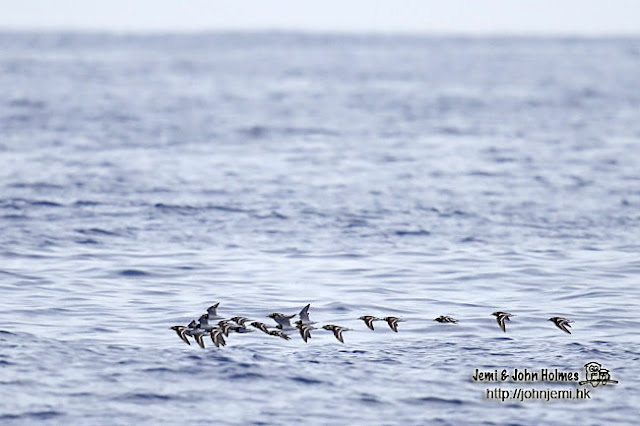 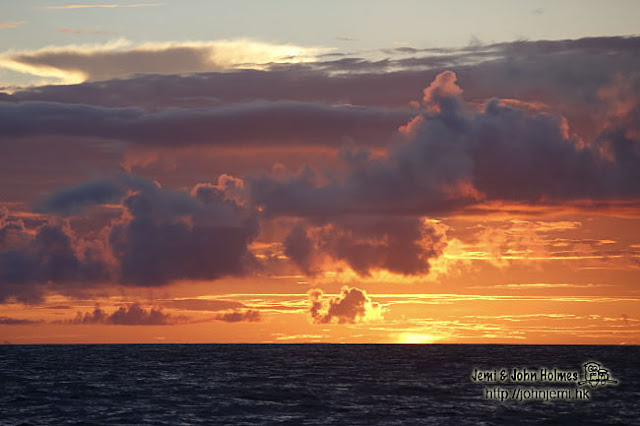 The following morning a spectacular sunrise was followed by a chumming session. After about an hour, a total of 70 Matsudaira’s Storm-petrels were attracted to the “slick”. 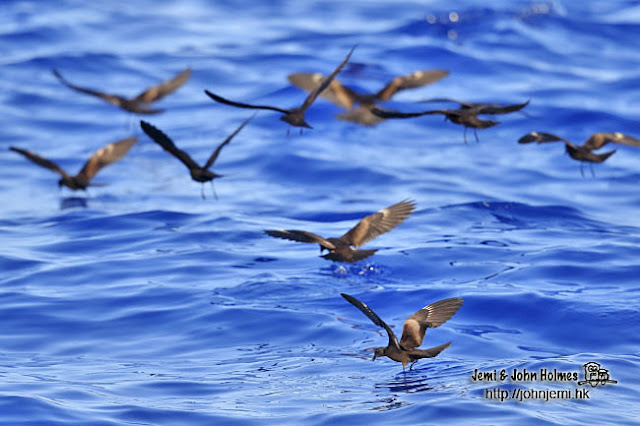 They hovered like butterflies over the water. It's what Storm-petrels do. 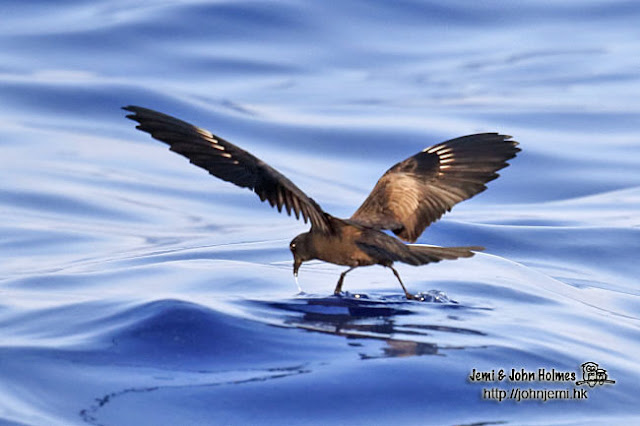 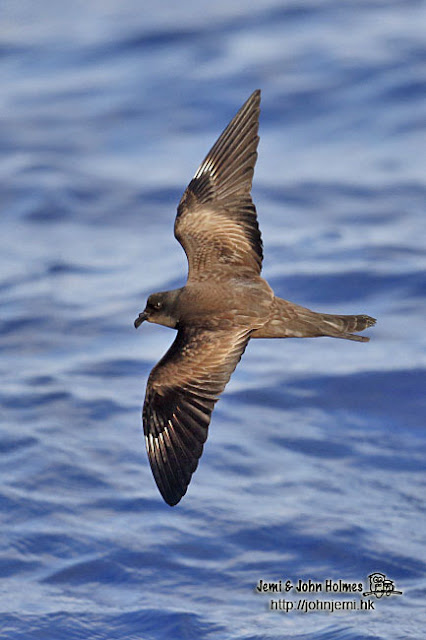 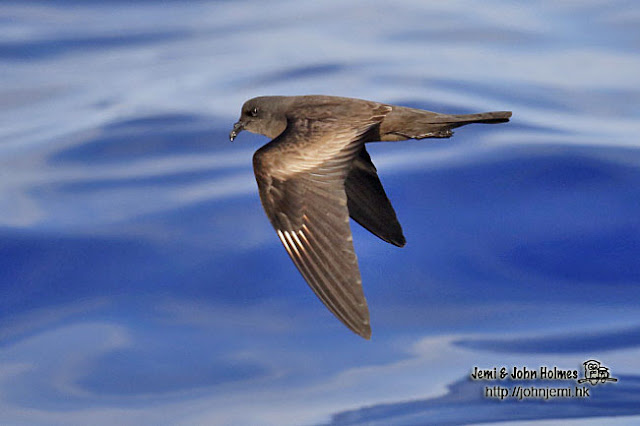 The Matsudaira’s were joined by a single Wilson’s Storm-petrel, the white rump really standing out in the crowd.  Wilson’s is a southern-hemisphere breeder, but is regular in the seas off Japan. Another potential addition to the Hong Kong list...... !! 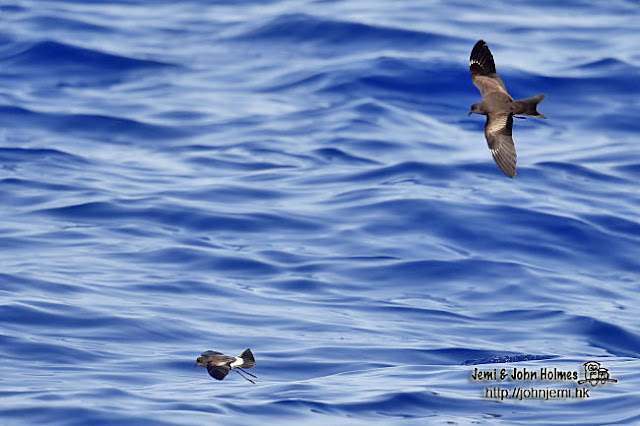 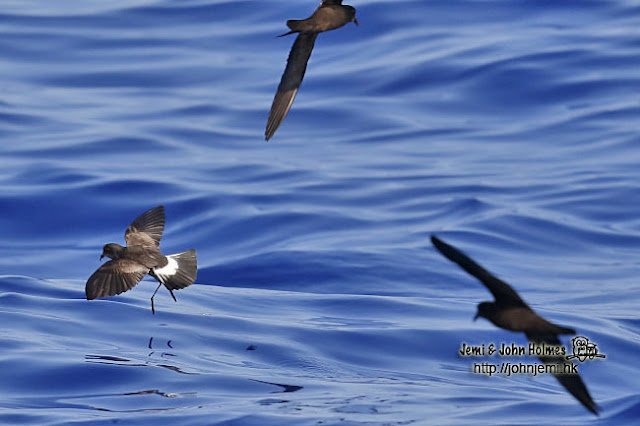 Matsudaira's Storm-petrels breed in the Ogasawara and also in the Iwo (Volcano) Islands, but many winter in the Indian Ocean, so it's another possible find off the coast of southeast China.

Meanwhile, we headed on towards the southernmost point of our sea journey.