Anything named after a "Russky" should be good... 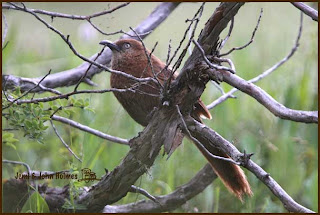 Some of the most colourful birds on the Tibetan Plateau are named after the Russian explorers who travelled and collected there in the late 19th century.

Petr Koslov left it comparatively late, arriving in Yushu (Jyekundo to Tibetans) in the summer of 1900. He continued south to where the plateau breaks up into deep, pine-clad valleys, and there shot a few specimens of the rufous babbler now known in latin as "Babax Koslowi" - Koslov's Babax.

Of course now the trend is away from using the names of western pioneers in English bird names. In "A Field guide to the Birds of China" (2000) it is referred to as "Tibetan Babax".

But "Tibetan" is the first half of the name of some great birds, too.
Posted by John Holmes at November 21, 2007