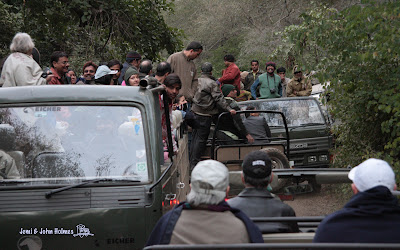 Jemi and I visited Ranthambore, in Rajastan. India in mid-December. I last visited there nearly twenty years ago. It goes without saying that, in a fast-changing country like India, things had changed a lot. There are now many hotels built to cater for "Tiger Tourism", and 90% of the visitors are domestic tourists. So money is being made from wildlife and Indians are taking time to appreciate their natural heritage, which has got to be positive news.

However, you'll find you are sharing the reserve with a lot more people than used to be the case. They now divide Ranthambore into five circuits (Max. 8 vehicles each). When a Tiger is spotted just outside the reserve at dusk as people are leaving, as happened when we were there, everyone positions themselves along the road, hoping to be in the best viewing spot when the Tiger crosses the road. 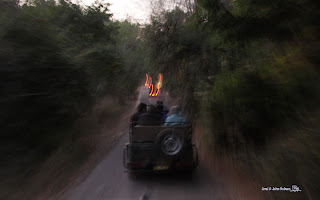 The convoy home after the Tiger finally appeared....