It was still very dark when I left the house. A morning in early September. The soon-to-be rising sun made a faint glow through patchy clouds.

I had Long Valley in mind, but on a whim decided to have a look at an area I don’t get to much these days, - a “hop, skip and jump” from there, along an old army road near the border.

Close to the Ng Tung river, what used to be paddyfields have mostly become a mess of container yards. In recent years I’ve visited the area at night to look for owls, but it has mostly been disappointing. “Still, should be good for a migrating flycatcher or two", I thought.

There are, however, Wild Boar along that road, so I wasn’t completely surprised when I rounded a bend and found a young boar standing there. It was still only 0615.

I wasn’t that prescient, though, because the camera was still in the bag, in front of the car passenger seat.  The boar (a bit like THIS one) ... 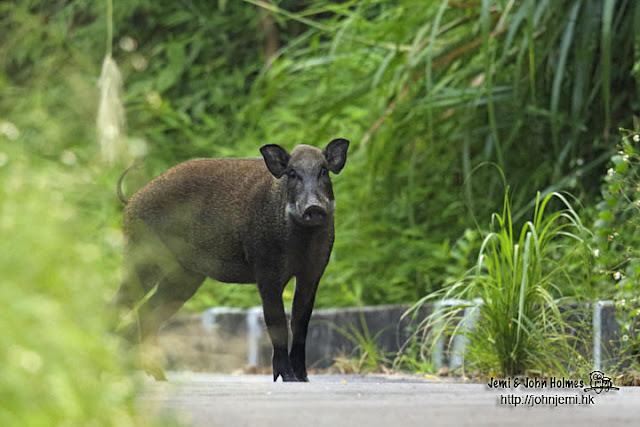 - couldn’t decide at first whether it was frightened enough to run away.  While I dragged the 500mm lens with camera attached from the rucksack it made up its mind and skipped into the undergrowth.

Camera at last in hand, I scanned the bushes, but it was gone.

At another bend I braked on sight of a distinctly heron-like silhouette a few yards in front. Something was standing on the concrete road with it’s back to me..

I could tell straight away that “That’s not what Black-crowned Night Herons do”  Of course, it was a Gorsachius night heron, and recognisable as a juvenile Malayan Night Heron (G. melanolophus) by the remains of scaly feathering on the nape, and some white edging to the tip of the folded wing. 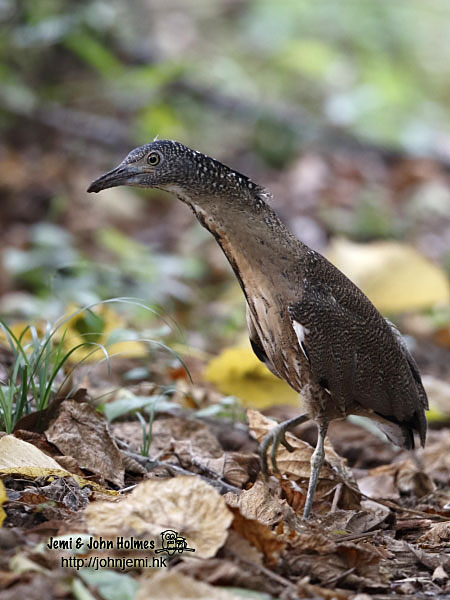 I found that the road was not busy so early in the morning and had the MNH in view for about fifteen minutes. An ISO of 3200 still only gave 1/13 of a second shutter speed at f4, - it was that dark. Then I backed away from the feeding bird to somewhere where the road was wider.  Ten minutes later another car ( someone going to work, presumably) swept past and I was sure that would have flushed the MNH from the roadside leaf litter.  Following the other car a few moments later, I found the bird had gone.

This species has a short but interesting track record in Hong Kong. To begin with, it is one of a very few breeding species that visits HK to breed and then migrates south to spend the winter.


Malayan Night Herons were first recorded in Hong Kong in 2003, by means of a camera trap on Lantau Island, when a pair was photographed.  The record was duly accepted with no human beings having seen the birds themselves.

In the late summer of 2004, another pair were found close to Fanling Golf Course. There were two young, and the birds were last seen on October 1st of that year.

A number of discreet visits to this group showed two, possibly three young.

But my biggest “bonus” bird on that first day was two hundred metres further on from the juvenile bird. Beside the track, only four metres away, was an ADULT Malayan Night Heron, calmly regarding me from a heap of cut branches.  It was so close I couldn’t get it all in the frame.

Mid-Autumn Festival has come and gone, and so have these secretive visitors.