Three species of tern breed on the rocky islets off the northeast coast of Hong Kong’s New Territories. Bridled, Black-naped and Roseate Terns brave  man-made hazards such as anglers who land on the islands and disturb their nesting areas, and the storms of summertime. Typhoon “Merbok” - first of the season -swept up from Luzon a few days ago, and a lot of rain has fallen since.

The breeding success (or otherwise) of the tern population is monitored by counters from the HK Birdwatching Society, who are subsidised by the Government’s Agriculture Fisheries and Conservation Department.

During Sunday’s Tern Count - yesterday (18th June 2017) an unusual, darker bird with a light cap was seen on one of the rocky outcrops popular with the terns - Kung Chau near Tap Mun Island.  It was initially put out as a Brown Noddy, but it seems that viewing conditions were not very good. It has been raining heavily for days.

HK’s only previous Brown Noddy was seen and photographed by Geoff Welch from Po Toi Island back in 2006,  in the wake of Typhoon “Chanchu”.  As it was a single-observer record, all the other listers in HK still “need” Brown Noddy,  including me.  After a couple of phone calls five keen "Twitchers" had agreed to meet up on the Tap Mun Ferry at 08:30 today and head for HK’s eastern waters - Mirs Bay.  We had hired a speedboat to go and look at terns in 2016 and Jemi still had the boatman’s card. Contact had been made, but the boatman (a Mr. HO) had expressed misgivings about going out at all, the thunderstorm warning was up and visibility could be poor during squalls.

However, when we arrived on the pier at Tap Mun at 10:00 the rain was easing off (Think:”From torrential to heavy”) and there wasn’t much wind at all. Mercifully, the sea was calm.  Then a WhatsApp message came to the effect that yesterday’s Noddy - upon review of some photos taken - could be Black, rather than Brown Noddy. Black Noddy would be a “First” for Hong Kong.

We were clad in our full rain gear, but with a spring in our step we piled into Mr HO’s speedboat and he cruised round the south of Tap Mun and up to Kung Chau.

A lot of wind and rain had passed since yesterday’s sighting, but as we approached the rocks we could seen and hear the Roseate and Black-naped Terns.

We scanned anxiously, while the rain pattered on the sea surface around us. Suddenly, there was the Noddy, about twenty metres away - we had practically driven right up to it. 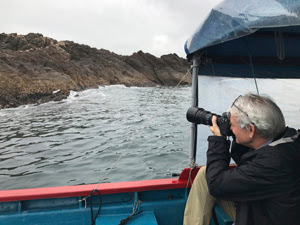 It was still raining, but the bird wasn’t concerned about us, in a small bobbing boat camera shutters whirring.  LANDING on tern islands is out of the question, but we had a great view from the boat.

We all knew we were lucky to get the bird so readily.  High Fives all round !  Many photos were taken.


After a while the Noddy followed the terns to feed on  shoals of sprats in the waters of Mirs Bay....


It later returned to almost exactly the same position on the rocks.

The Noddy was quite a worn individual.  The nearest known population of this species is in the Sulu Sea, between the Philippines and Borneo.

It actually stopped raining while we had the bird in view, but the light could not have been described as bright.

Well pleased with ourselves, and grateful for the diligence of the Birdwatching Society's Tern Surveyors, we headed to Wong Shek Pier.

It had started raining again.