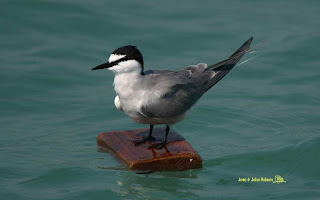 We're going on the boat outing to Po Toi island this Sunday, April Fools that we are. Hong Kong may be one of the best places in the world to see Aleutian Tern. It was first noted by Peter Kennerley and others on a boat trip to the West Lamma channel here in August 1992. The terns breed on the Aleutian Islands which run southwest in a line across the northern pacific from Alaska. A few specimens were collected near the Phillippines in the 1980s but the pacific wintering grounds of this species have remained largely a mystery. There are more recent records from Singapore and Indonesia

They're more commonly seen in HK in Autumn (August/September) than spring, but we might get lucky this Sunday. If you don't go, you'll never know !
Posted by John Holmes at March 29, 2007