The Promise of Youth

The First Cricket Test between England and the West Indies has just concluded, with a win for England.  (After, it must be said, a bit of a "wobble" ! )

Stuart Broad took 11 wickets for 145 runs in the match..  a splendid achievement.   Comparisons have been made with Ian Botham's "Eleven-fer.." feat in 1978; - 11 for 140 to be precise.  Which is my excuse to trot out this photo I took of Ian Botham at Lord's in that very match.

I used a Russian MTO mirror 1000mm lens, with a Practica Super TL camera, rigged up on a home-made rifle mount.  The photo was taken on Ilford FP3 and all the processing was done with my own fair hands.

By late Saturday afternoon, when this photo was taken, New Zealand had been "skittled" to end the day at 37 for 7, a position they did not recover from.  I remember a forlorn Mark Burgess (the NZ Captain) trudging back into the shadows of the pavilion. 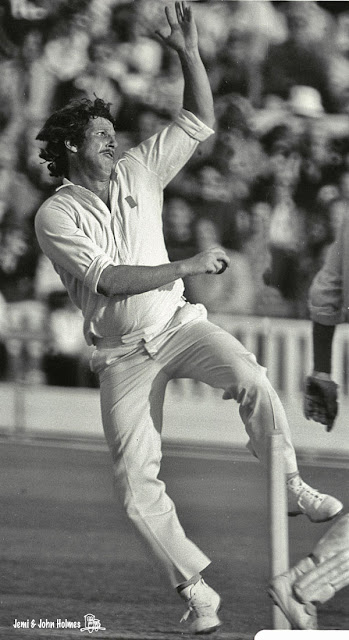 England's highest wicket taker was just at the beginning of his Test Match career and, in a way, that summer marked  a "beginning" for me too.

I had just received an appointment letter to join the Royal Hong Kong Police, and 1978 was my last full summer in the United Kingdom. Aged 22, I flew out to Hong Kong a few weeks after this photo was taken.

But I'll never forget Ian Botham - in full of a packed house at Lord's - showing the kind of irresistible bowling form that was to define his career.  It's nice to see a brief echo of it in the performance of Stuart Broad this week.