The "One that Got Away" - edited

Ten years ago this month, in March 2001, Mike Turnbull and I were in the HKBWS Boardwalk hide on a hazy Saturday afternoon.   The tide had receded and a Lesser Frigatebird was harassing all the other birds in Deep Bay.  It was the focus of our attention - as you might expect.
Out in the middle of the bay, 300 to 400 metres away, the Frigatebird disturbed another bird from the surface of the water.  Not another Shoveller, not even a duck, it flapped languidly in our general direction on long dark wings. Mike exclaimed    " It's a Gadfly Petrel  !! " with possibly an expletive or two.  I knew I'd seen some members of this family in New Zealand, but was also acutely aware that I knew practically nothing about Pterodroma petrels.
I had about six frames of slide film left in the camera and, with a 1.4 converter on the old 600mm Pentax I was focussing manually.  I was desperate to get a record shot, but knew the bird might come closer, too.  Grab a shot now, or wait till later ? Suppose it just flies away ?  In the end, I took only three shots, and this is the sorry "best" of them. 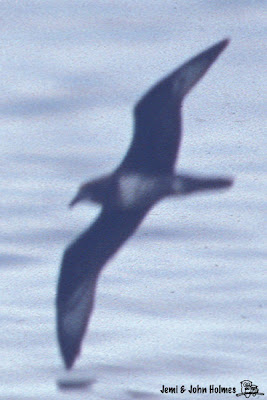 Mystery Pterodroma
The "Pterror" came to with 100 metres and crossed the line of mangrove to  our left and was not seen again.
Mike T. circulated  the photos and a description to solicit opinions on identification  overseas, especially to Australia and NZ experts on pelagic birds. However no consensus could be reached and the record languished, the bird not identified to species, although there seemed to be agreement that it was a Pterodroma petrel of some sort, and eventually the HKBWS Records Committee accepted it as such.
For a birder the key point is that ANY member of this family is a "First" for both Hong Kong and mainland China.
In one of my Japanese photo books  I saw a photo of Providence Petrel (Pterodroma solandri), and thought "That's it !"  (Not very scientific, I know.)   And after ten years no-one else seems to be convinced.
In 2007 I got a copy of "Albatrosses, Petrels and Shearwaters of the World" by Derek Onley and Paul Schofield.  Looking at Plate 16 - Dark Pterodroma Petrels of the Pacific - I have become an "instant expert".  A lack of white shafts on the upperside of the primaries should eliminate Kermadec petrel and Kermadec and Providence seen most likely on range.  BUT  other Pterodroma petrels may be possible, too, such as Murphy's and Herald.
In the Dec 2010 edition of the ABA magazine Birding there is a mention of this interesting vagrant petrel in British Columbia:-  http://oregonseabirds.blogspot.com/2009/10/solanders-petrel-in-british-columbia.html
But are mystery petrels really vagrant, or are we just not spending enough time looking in the right places ?
We can't alway identify everything we see and it is a pity that we couldn't really nail this one down. But Identification criteria are certainly improving all the time, especially with the widespread availability of digital photographs.
Who knows, perhaps one day we'll be able to work this one out.  For now,  - like a fishing story - it is   "The Big One That Got Away "  !
(Added 1st April 2001)  -  but I'm not fooling !

David James has kindly taken the trouble to comment on the photo above on the Oriental Bird Club internet news group as follows : -

"John Holmes has posted a photo of a Pterodroma on his blog that was photgraphed in Deep Bay 10 years ago. http://johnjemi.blogspot.com/
This bird is clearly a Herald Petrel, P heraldica. Only 5 petrels show a dark crescent in the white underwing flash (formed by the dark tips to the primary coverts). Solander's Petrel and Henderson Petrel never show a white belly or throat. Trinidade Petrel has dark lores. Kermadec is the most likely alternative, but its best feature, white primary quills, is not visible in ventral views. Other important details on the inner underwing are not clear.
However, the shape fits only Herald Petrel (and Trinnidade): a long and slim tail, and a skinny looking head. This is quite wrong for Solander's and Kermadec.

It is an intermediate morph bird, although there is little difference between pale and intermediate.
If you have Harrison's 1987 photo guide, look at p 56. If you have Onley & Schofield look at Plate 20, image 2c.


For the record, then here are scans of all three photos I took in March 2001. 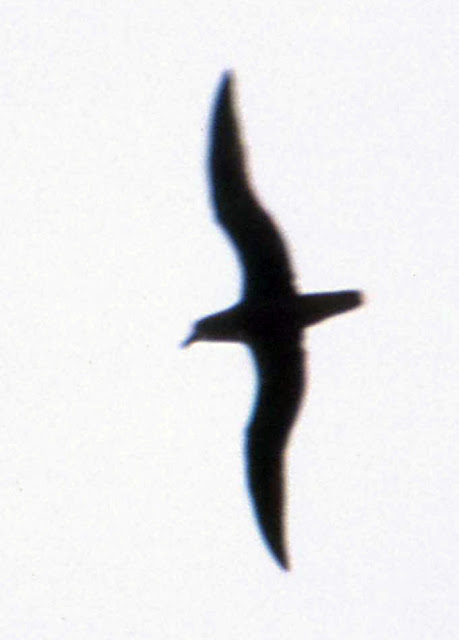 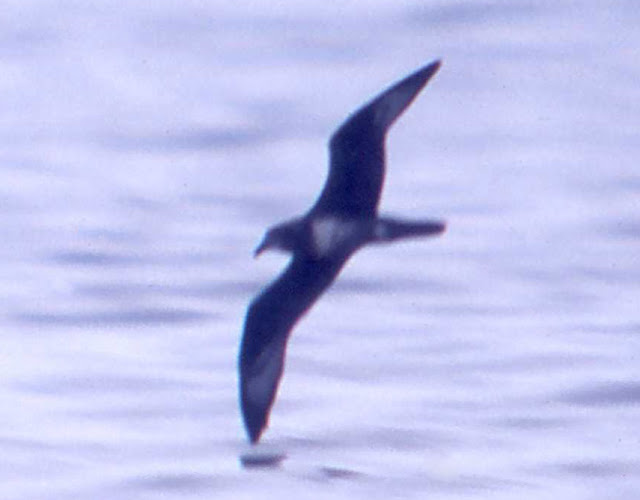 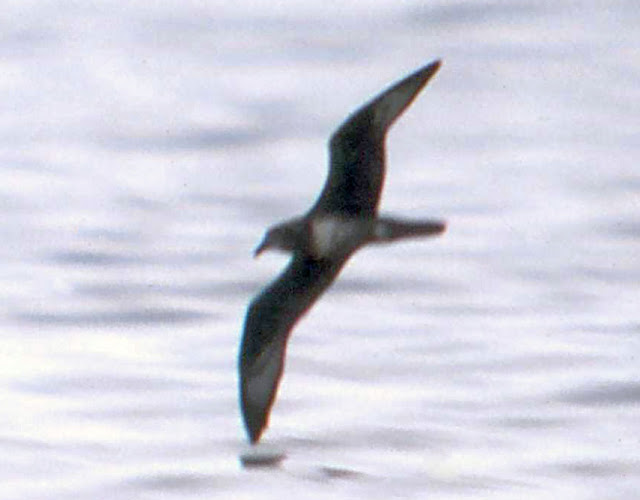 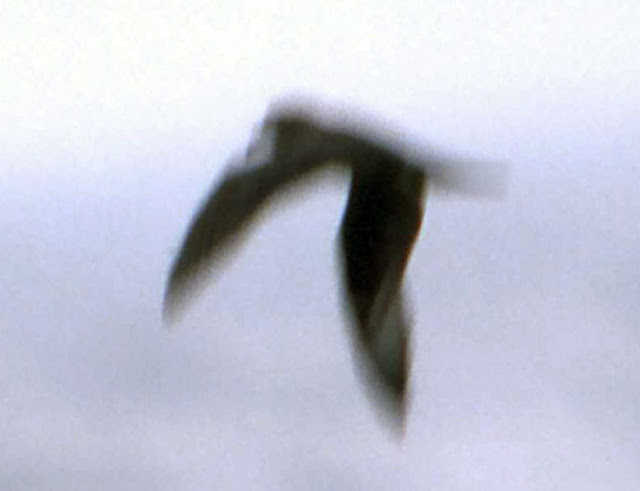