“Life’s a beach..” - if you’re a tern, that is. Tern life is also things like “plucking sprats from the surf” but most of those activities don’t make for a catchy blog post title.
But I digress (as the great Tom Lehrer used to say).
Last Friday afternoon (8th July) Jemi and I met  Brian Ivon Jones and Jonathan Martinez at Luohu bus station in Shenzhen for the journey to Haifeng, about 130 km ENE of Hong Kong.
Bright and early on Saturday morning at the east end of Dahu Beach a couple of Swinhoe’s Plover were sighted at the shoreline, and a large grouping of terns was on a sandbar perhaps 100m away.  It was obvious with views through Jonathan’s scope that several tern species were present.
Jemi persuaded a boatman to take us over, but I stayed ashore, fearing that four of us in a sampan with the boatman and his gear would be a bit crowded. I also wanted to try to get shots of Swinhoe’s Plovers without treading on other people’s toes. 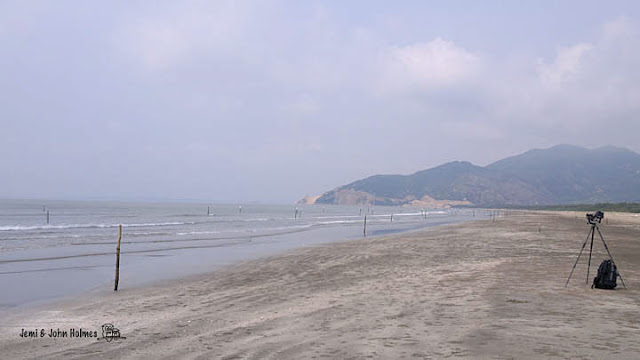 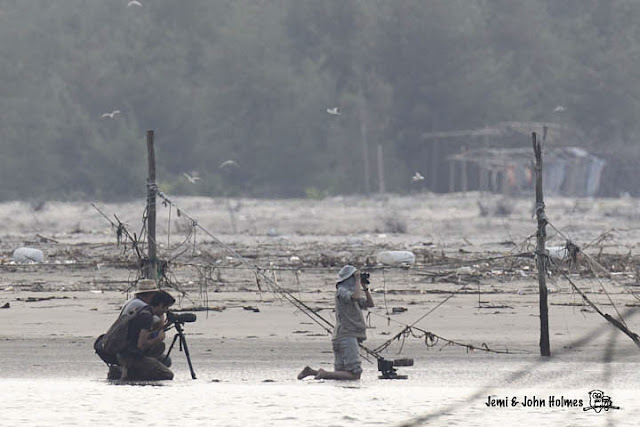 Little Terns – which breed at Dahu - were present, and Great Crested Terns were quickly identified.  Roseate, Bridled and Black-naped (familiar HK breeders) were there with Eastern Common and Gull-billed.  Single juveniles of White-winged and Whiskered brought the total to nine species !
Meanwhile, I found a Hoopoe, well camouflaged among the flotsam on the beach. 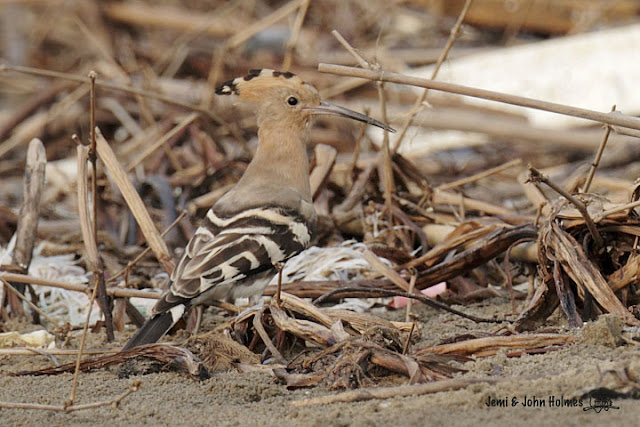 The Swinhoe’s Plovers seemed to be fewer and shyer than my previous visit two weeks earlier, but with the 800mm lens this time I still got a few pics. 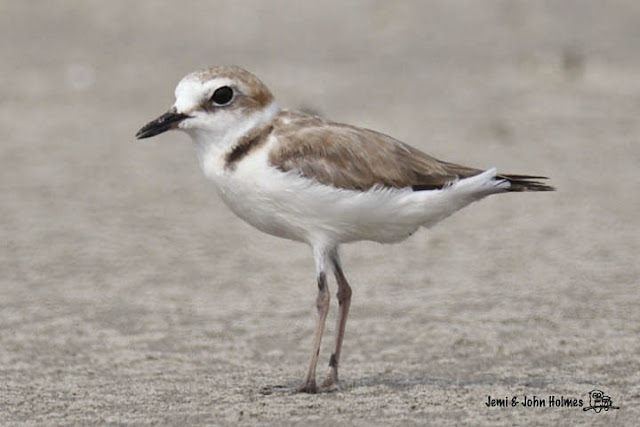 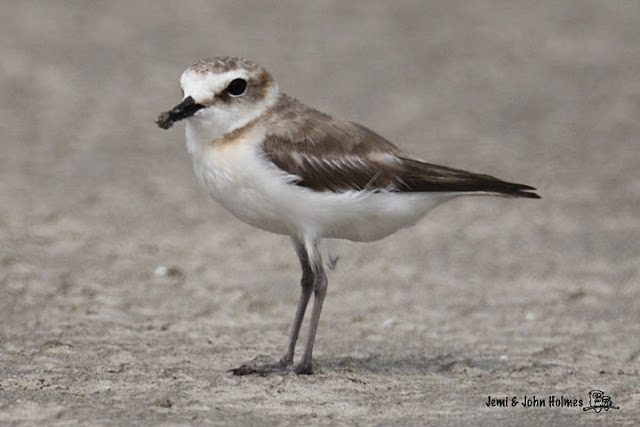 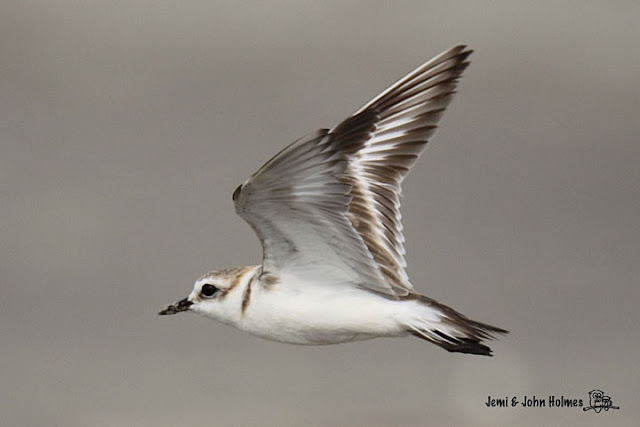 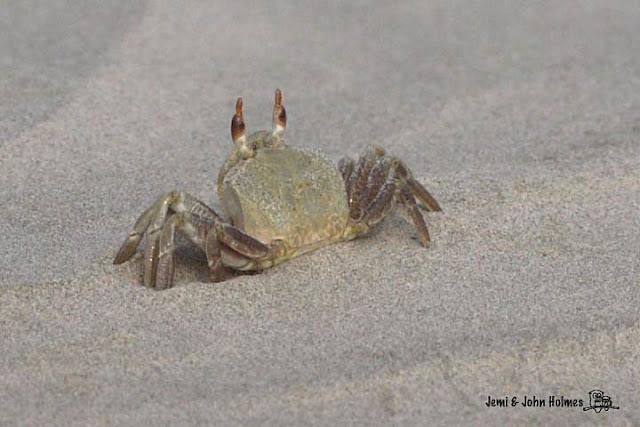 Jemi and I left Jon and Brian on the beach and returned earlier to Haifeng. Later we got the bus to Zhelang on the coast south-west of Dahu.  But the seafront shops selling swimsuits, beach balls, buckets and spades were a clue that any stretch of sand in the area would be largely occupied by holidaygoers. And so it proved. A tricycle ride to the windfarm peninsula of Baishabundao – despite the name - revealed a mostly rocky coastline. (Locals call it "Windmill Island".)  Beside the causeway between the power station and the island we saw a rocky outcrop with about twenty Black-naped Terns. A more distant sandbar held many more terns, but it was too far to see what they were. 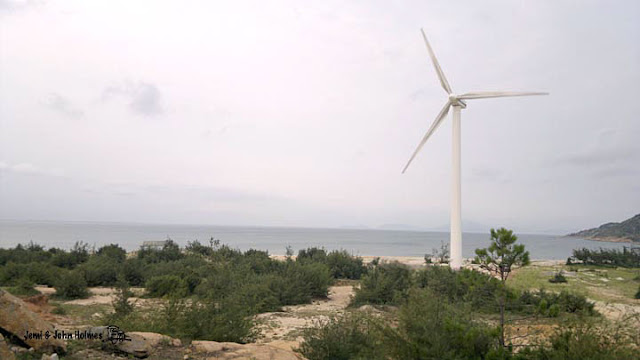 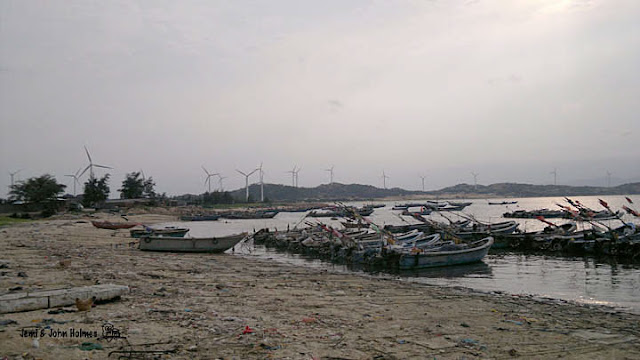 On Sunday BIJ and JM did the fields and fishponds north of Dahu Beach, before returning to Shenzhen.  We (J & J) headed to Shajiaowei on the promontory south of Shanwei.  There the locals take tourists for speedboat rides (RMB 300 !) to the island of Guilingdao, which has a temple, a couple of rooms to stay, and two newish statues which seem to be successful at attracting island visitors. 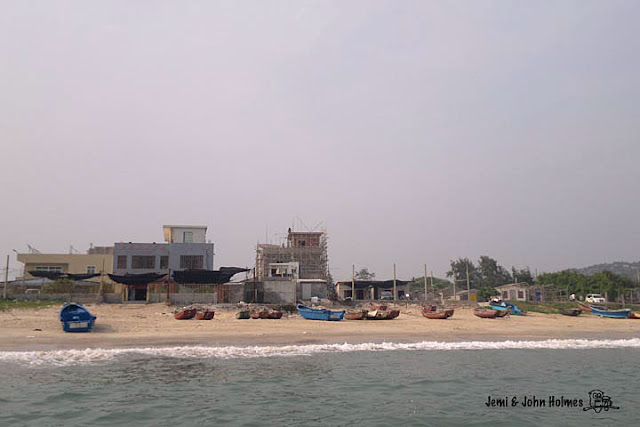 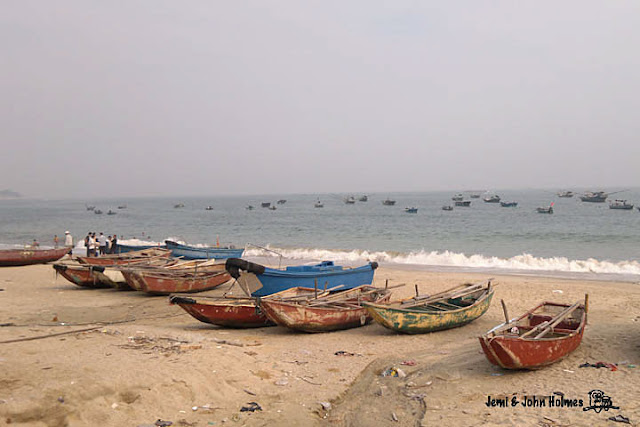 Shajiaowei
Nearby there were rocky islets with breeding Bridled and Black-naped Terns. Eastern Reef Egrets and Black-crowned Night Herons were also present.  A lone Common Sandpiper on a rock might have been an early southbound passage migrant. 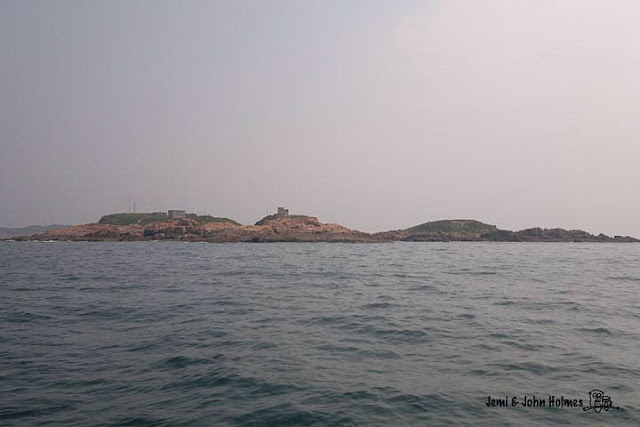 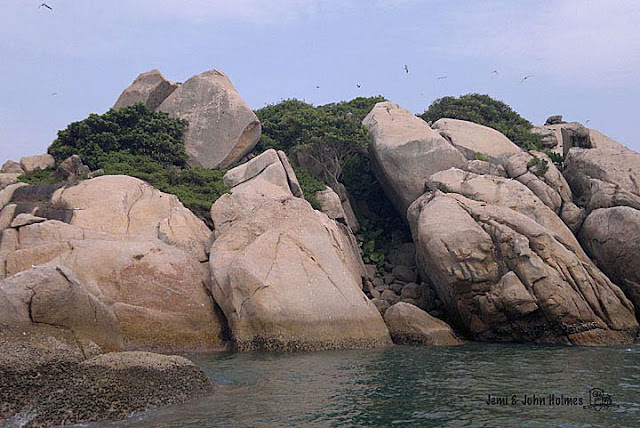 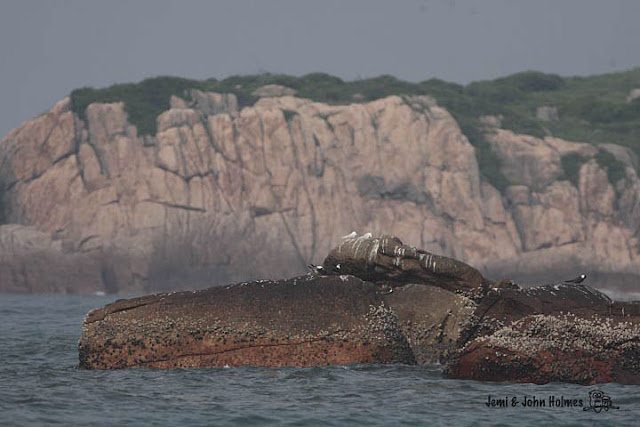 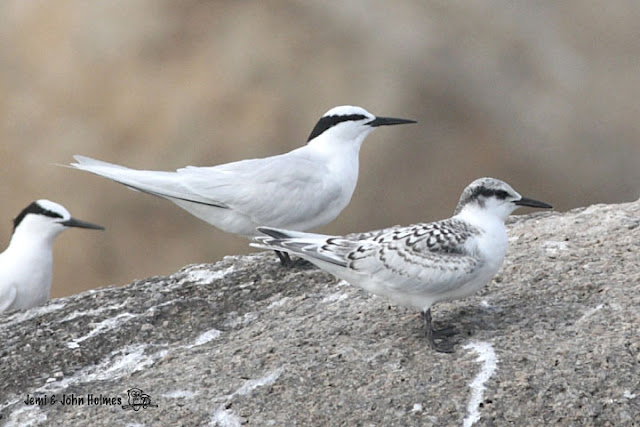 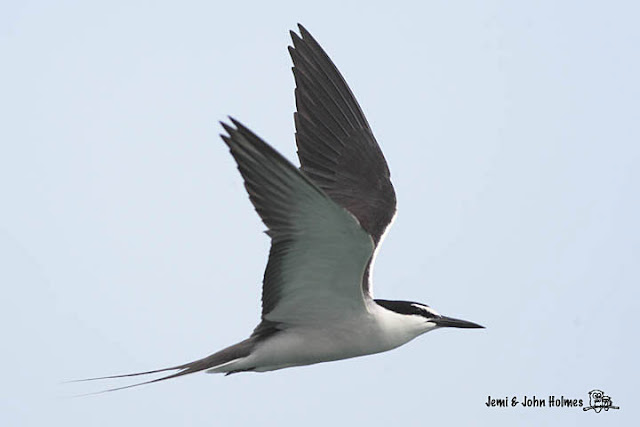 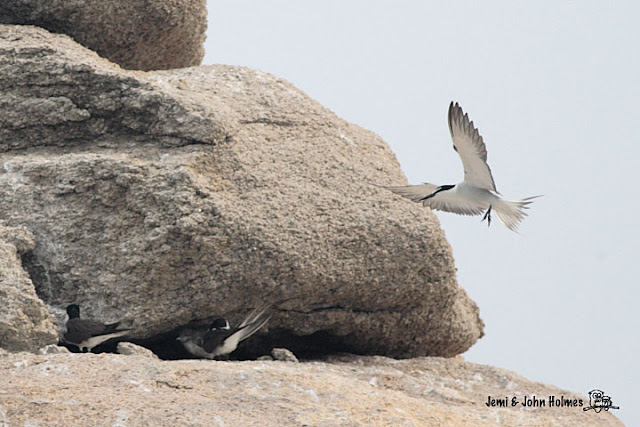 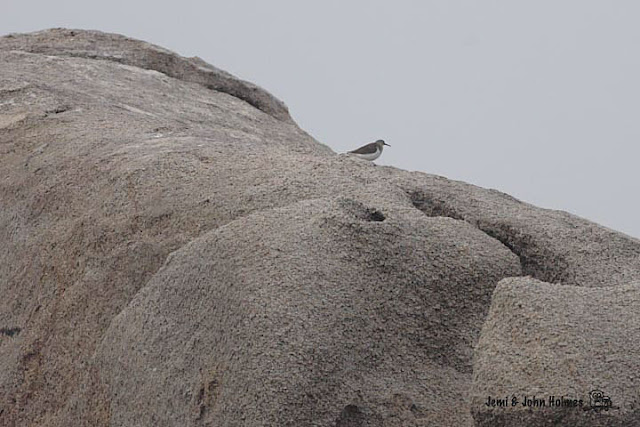 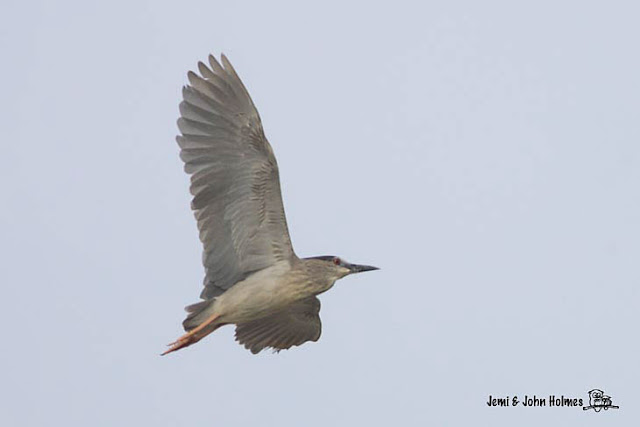 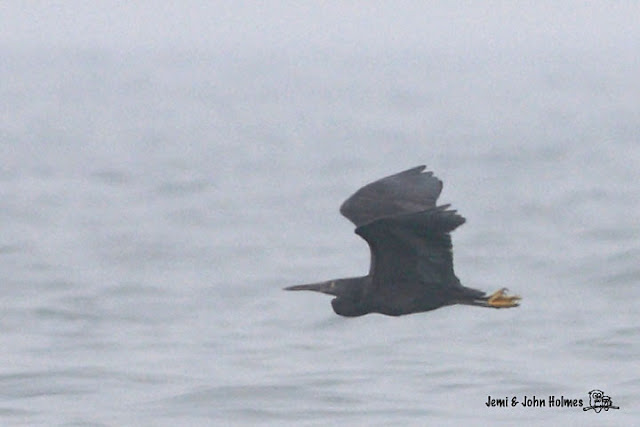 A bus from Jiesheng near Shajiomei took only 45 minutes to return to Haifeng.
******
On Monday morning we got a local bus to Lianhuashan, called “Lotus Mountain Resort” in English. The tourist complex and temple (opened 2010) sit at the foot of the mountain with steep, mostly scrub-covered hillsides above. 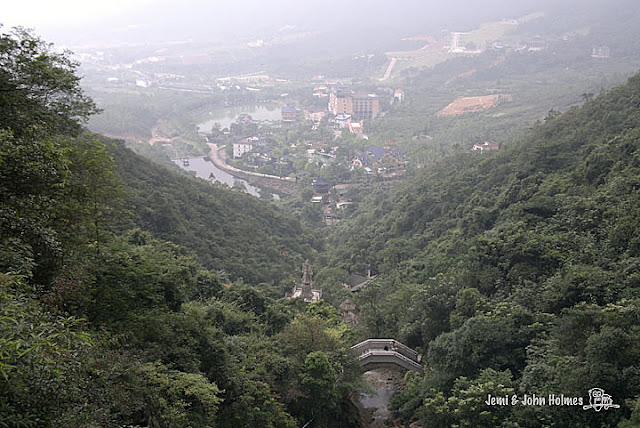 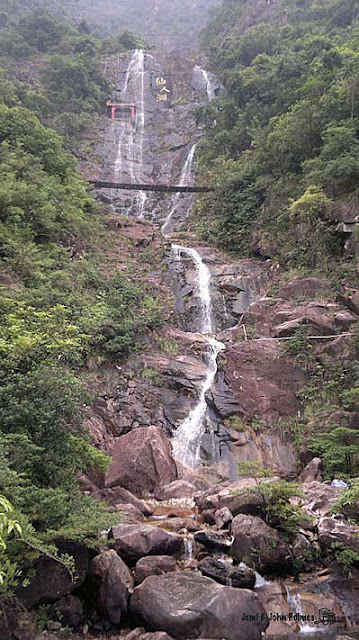 The main natural attraction is a waterfall. The stream below this held breeding Slaty-backed Forktails and Plumbeous Water Redstarts.  Other typical south China woodland species included Scarlet Minivet, Grey-cheeked Fulvetta, Rufous-capped Babbler, Streak-breasted Scimitar Babbler and Chestnut-winged Cuckoo (CWC).  A pair of CWCs were seen bullying a Sooty-headed Bulbul.
Asian House Martins showed well over the boating lake as it began to rain. We took that as our cue to return to Haifeng and eventually, back to Hong Kong.  Although Lianhuashan was not brilliant birding, it made an interesting counterpoint to the bird activity elsewhere in Haifeng County.
So it looks like the Swinhoe's Plovers are dispersing, but there is still plenty to see in the area.  Many Thanks to both Brian and Jonathan for the pleasure of their company over the weekend.
Posted by John Holmes at July 13, 2011