Seabird numbers increased again as we approached Norfolk Island.  A number of interesting species breed there, including Red-tailed Tropicbird, Black Noddy and White Tern.  The night before we arrived, Chris Collins briefed us on the endemics and near-endemics we would be looking out for.

Norfolk Island must have been a tough place for Norfolk pine-felling convicts in the 1830s.  The historical prison buildings near the dock at Kingston and elsewhere are among Australia's oldest.  The human population includes the descendants of "Bounty" mutineers transferred from Pitcairn Island when it could no longer support them.

Blessed with sunny weather, we landed in early afternoon.  Some of the group opted for a more history-oriented afternoon but the dedicated birders headed for Palm Glen, at the edge of Norfolk Island National Park.


According to "The World's Rarest Birds" recovery efforts for the Critically Endangered Norfolk Island Parakeet brought the population up to about 200, but since the end of the programme it is feared numbers may have slid again.  The Parakeet loses out in competition for nest sites to Crimson Rosellas, European Starlings and even feral honey bees.


This individual (above) could not have been more obliging for a bunch of day visitors like us !

In late afternoon we went to Rocky Point, where in the trees (Norfolk Pines, what else ?) Black Noddies and White Terns were feeding young, while fearless Red-tailed Tropicbirds nested on the grassy banks below. 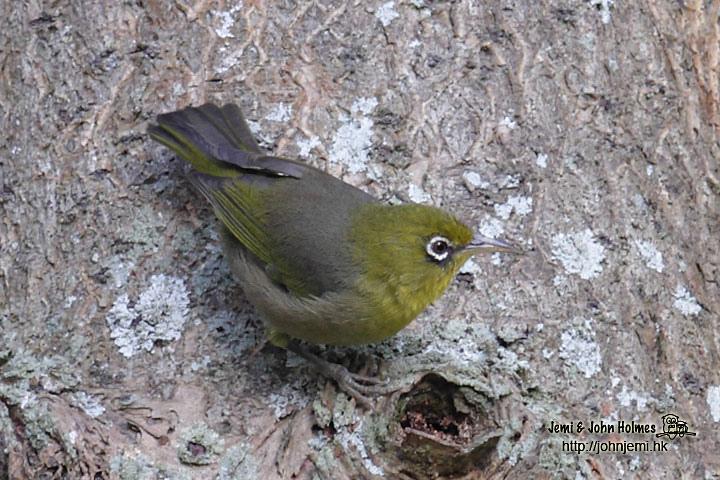 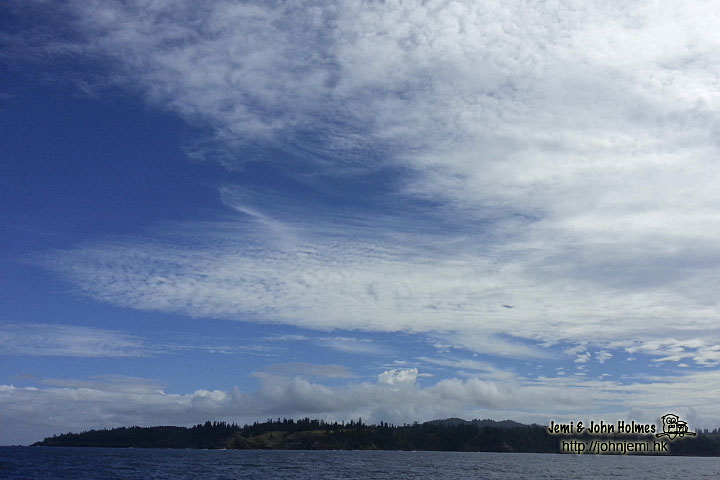 Norfolk Island was one of those places where we wished we'd had a bit longer.

After two more days of sailing north we noticed a few more Gould's Petrels, which heralded our approach to New Caledonia, where they breed in the mountains of Grand Terre, the biggest island.

The waters south of New Caledonia are home to the as-yet-scientifically undescribed "New Caledonia Storm Petrel".  Could they be New Zealand Storm Petrels, or could they be something else entirely ? Prior to the 2013 WPO,  Chris Collins and a small group had been on a catamaran trip to these waters.  Although NCSP was seen and photographed well, they narrowly failed to catch one !

(It seems as though other people have been out there trying to do the same thing, here is a link to a Zegrahm Expeditions account of Peter Harrison - among others - also narrowly failing to catch a NCSP.)

We got to the right area, and fish oil slicks were put out.  But, despite the stage being set, the NCSP gave only the briefest of views to some.  It was not seen well enough to go onto the official trip list.... a "Dip" !  But not for lack of trying.  Wilson's Storm Petrels and a few Flesh-footed Shearwaters didn't really compensate, but that's seabirding !

We docked at Noumea in the wee small hours of April 2nd, and found ourselves waiting for the coach on a lit-but-locked section of wharf.  Once we got going, it was a ninety-minute drive to Parc Riviere Bleue to "cherchez le Cagou".

At the Reserve entrance, we were greeted by a Barred Honeyeater and this sign.... 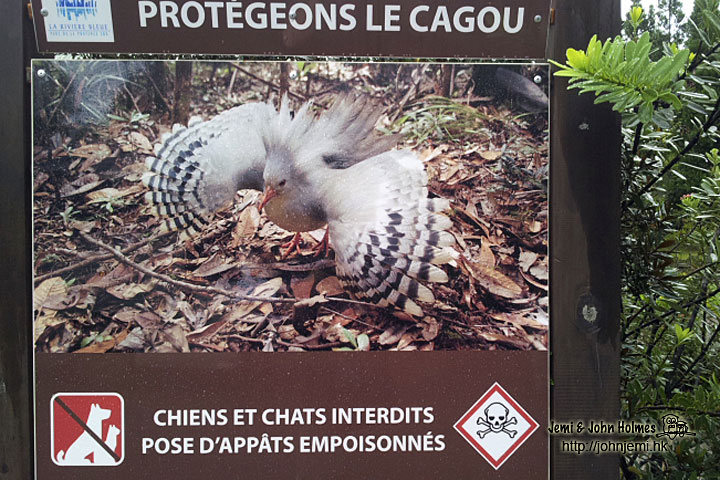 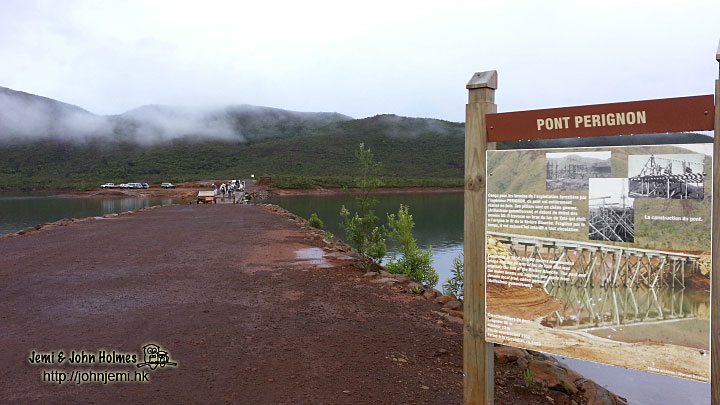 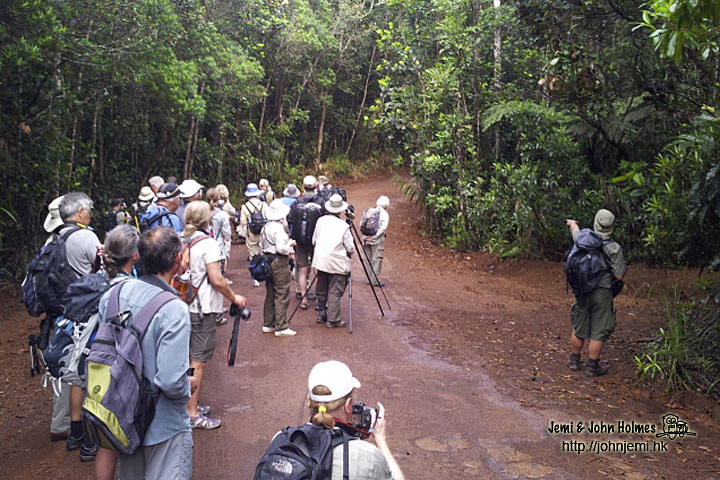 As can be seen, we made up quite a throng for what was basically woodland birding.


But there was no need to worry. The Kagus were not shy. Once the Kagus had been seen, we spread out along the trails.


As far as "Green" Pigeons go, to my mind they don't get more exotic than "Cloven-feathered…." We had a decent 'scope views, but the photo here doesn't do it justice..

As we ate our picnic lunch, confiding Yellow-bellied Robins watched us from the nearby bushes....