The Hong Kong birdwatching Society has a forum on its’ website and requests for bird identifications are often made.

One such request appeared on 26th January, about a bird seen the previous day at Kadoorie Farm and Botanic Garden in Hong Kong’s New Territories.

I missed the posting but had a group WhatsApp message to the effect that Paul Leader thought the bird in question was a Fire-capped Tit - ( Cephalopyrus flammiceps ).

Fire-capped Tit would be a first for HK, so it seemed worth a bash down to KFBG for a look, especially when news came through that it had been re-found on Monday morning (28th Jan), in the same flowering apricot tree.

The limited parking spaces were fully occupied, so we arrived by bus at KFBG’s front entrance.

Also fully occupied were seats on the hourly Shuttle Bus to the top of KFBG’s grounds, so we had a fairly stiff walk up to the spot, which took about 30 minutes.


But we were in luck, and the bird was showing well to a small but appreciative audience. 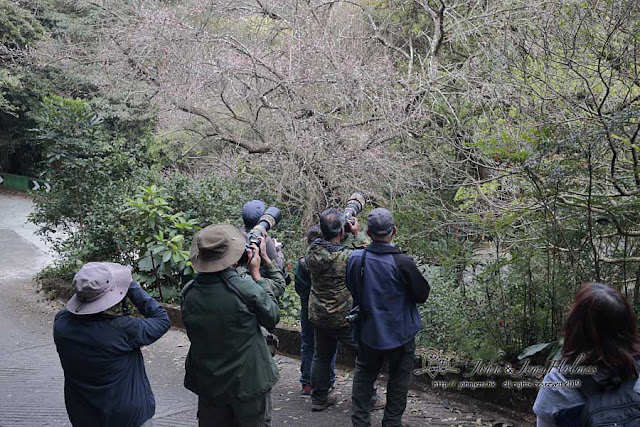 It was vigorously bashing away at the apricot blossoms, - above with flower stamen in its bill - and also found one or two caterpillars among the flower buds while we were watching.

Most characteristically, it sometimes held the apricot flower buds in one claw while pecking at them.


After another 45 minutes or so, the bird moved on. Having trudged up the hill we were prepared to wait for it to return. But eventually, after a couple more hours it hadn’t come back and we left.

Fire-capped Tits breed in Sichuan and Northern Yunnan and there are regular records from Yunnan in the winter (indeed, we saw them on our recent trip there.)

Richard Lewthwaite was at KFBG and noted there there are no previous Guangdong or southeast China records for this species. In the western part of their range some disperse to central India, with others in northern Thailand.  So, vagrancy is not impossible, and a female seems less likely than a gaudy male to be an escaped cage bird.

The HKBWS Records Committee have a difficult task to declare whether they think this bird is wild or escaped. But, meanwhile we can just enjoy the thought of it, on a Hong Kong hillside, bashing around the blossom-laden apricot branches.