After splendid bowls of noodles in Mengyun town, we packed the bags into the car and headed north towards Nabang on a minor road that joined Route S 318 a few kilometres east of Tongbiguan. 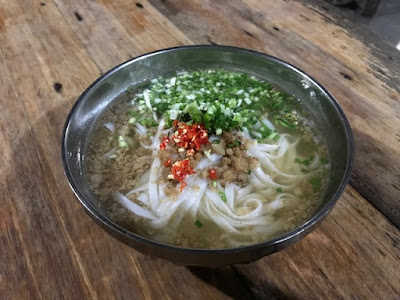 A large, clear river runs under a bridge and we recalled that we had seen River Lapwings there on our 2012 Yunnan Trip.  There was a pair there this time, too,  but they flew off before I could get close enough for a photo.

Growing mushrooms and fungus is a big activity in the area and we checked the fields nearby for Siberian Stonechat and Little Buntings.  There was another police checkpoint in Tongbiguan, but my HKID card was acceptable to the officers on duty, and we got through.

Down Route S318 towards the border town of Nabang, some of the best woodland habitat is between km 213 to 216 (where the elevation goes from 1200m to about 1000m).  We had a couple of good mixed flocks there and a Rufous-bellied Eagle soared overhead.

At km 223.5 we turned uphill to Rongshuwang - “King of the Banyans”.  This has been a popular spot for birding parties over the past few years, but it was sad to note that it seems to have failed as a tourist attraction, with only one elderly watchman on site, and all the incense and souvenir sellers gone.

Back on the main road S 318, after crossing a bridge, we visited another Bird Pond.  A path behind a farmhouse led through a banana grove to a hide overlooking a couple of shallow water ponds, where Citrine Wagtail was a first for the trip.

A party of sought-after Rufous-necked Laughingthrushes came to the feeding area.

In the distance we had seen Collared Mynas  from the hide, so after paying for our use of the hide (the usual 60 RMB each) we drove on briefly towards Nabang and turned left towards the river along a dirt track.

There we had a party of about 25 collared Mynahs in the late afternoon sun.

Long-billed Plover, Painted Snipe and Striated Grassbirds were all seen well near the river’s edge.

We had dinner in Nabang and a large and noisy roost of Barn Swallows occupied the wires over the street outside the restaurant.

We drove north of Yingjiang on “Xiao DU”’s recommendation to the "Su Dian Lisu Minority Area"  which the local government is promoting as “The Eden of the Orient”. It was a pleasant area of cultivated fields, meadows and wooded hillsides approaching 2,000m in elevation.

It was first area we had been to on this trip with frost on the vegetation. In the misty corner of a damp field, a Black-tailed Crake pottered around before the sun rose over the distant hills.

So we birders were thrilled enough, but it seemed to me that there might not be enough in the way of natural features to keep the interest of general visitors.


Eventually the road rose to a 2,200m ridge which marked the border with Myanmar.

We saw a big flock of Speckled Wood Pigeons in flight, but they were gone before I could stumble out of the car with the camera. 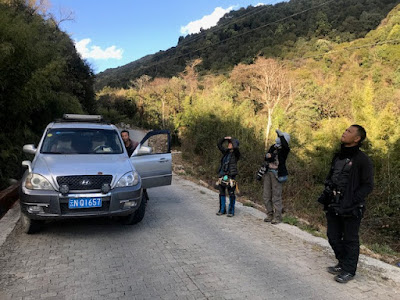 On the way back Jemi and Carrie scanned a not-very-promising watercourse we had just crossed.  In the distance were what appeared to be three Mandarin Ducks. We piled back into the car and had the cameras ready, - but the Mandarins  took flight at our appearance, even though we thought we were far enough away not to disturb them.

Fortunately, after a nervous circling they returned to where they had been.  "Xiao DU" - our guide - was very pleased - Mandarin was a new bird for Yingjiang County, and he got some shots for his forthcoming book.

In the western suburbs of Yingjiang we birded an area of intensively cultivated fields.

Distant parrots were noted in a bare tree, and on closer observation, these were flying to a small stand of sweetcorn. Although there were only about a dozen birds, we realised there was more than one species involved.  And eventually it was Xiao DU who pointed out that we had three parrot species.


Having “cleaned up” with the parakeets, we headed to the more open fields between the S 318 road and the Daying River.  Big raptors were seen almost immediately, but driving closer showed all the big Aquilas to be Steppe Eagles.  There were about 15 of them, they were unafraid of us, and we got some very good views.

After lunch in a nearby town we drove east, past Tengchong, over the Mekong on a grand bridge and reached the Salween Valley through a long tunnel. At sunset we arrived in Baihualing, the village at the edge of Gaoligongshan.