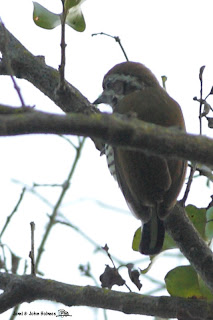 Last Saturday (20th Nov 2010) we decided to get away from the madding crowds elsewhere and birded Shek Kong Water Catchment Road.

It is advanced secondary woodland - like Tai Po Kau - and many of TPK's resident birds are there too.

However we found one rarity - a Speckled Piculet. Hong Kong's first record was as long ago as 1996 near Ma On Shan, netted by Mike Leven when he was ringing birds for a survey. Since then this species has been seen in Tai Po Kau once or twice and Ng Tung Tsai (twice).

Saturday's individual would be HK's fifth or sixth.

It is not particularly rare in Guangdong Province, so it seems reasonable to expect them to become more common in our maturing woodlands. But unlike other species - Pygmy Wren Babbler, for example, it has been pretty slow "off the mark" !
Posted by John Holmes at November 25, 2010