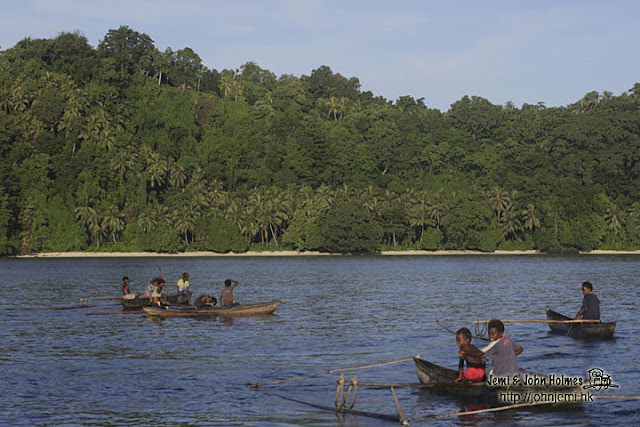 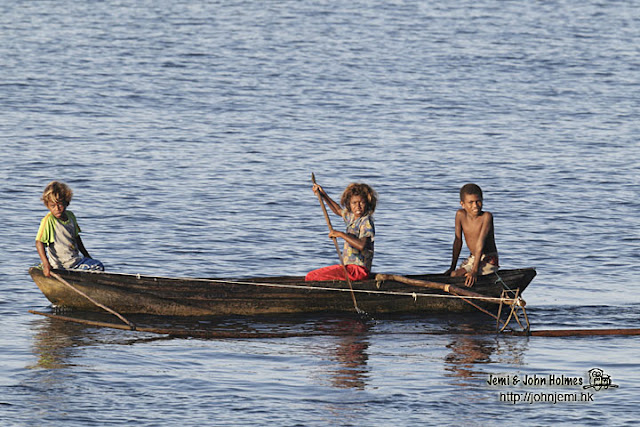 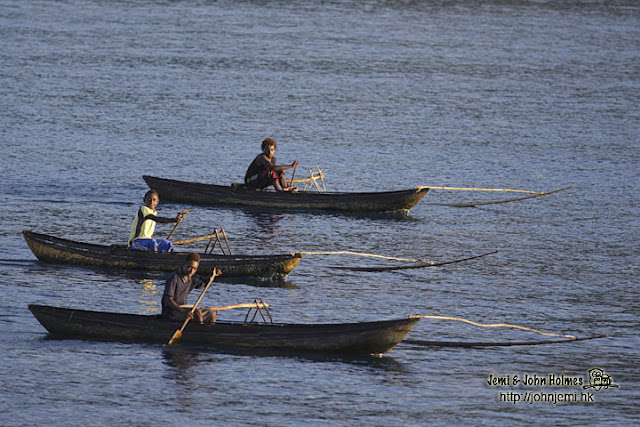 
As with the other endemic bird-laden islands, we had had a briefing the previous evening from the tireless Chris Collins, when he told us what we'd be looking out for.  And we all had a "cheat sheet" which listed the endemics so that everyone could keep track of what they'd seen and what they still "needed". 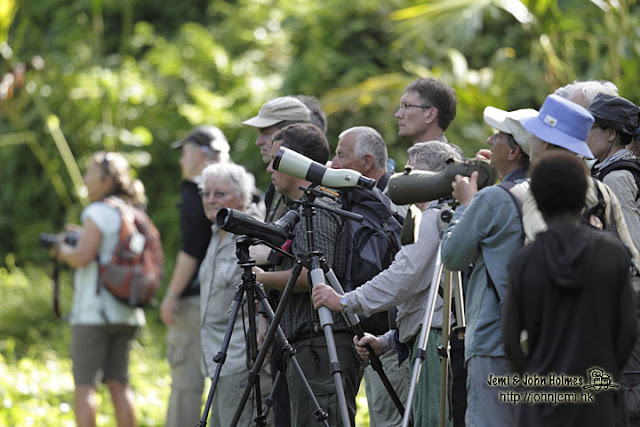 
It's easy to lapse into a "Tropical Island Paradise" way of thinking. But the road we birded along had been built by loggers and the timber abandoned at the waters' edge served as a reminder of the environmental threats these islands still face.


As we left Makira, a pair of Beach Kingfishers showed themselves…. so thank to Mike Bell for his skillful driving of the Zodiac in shallow waters... 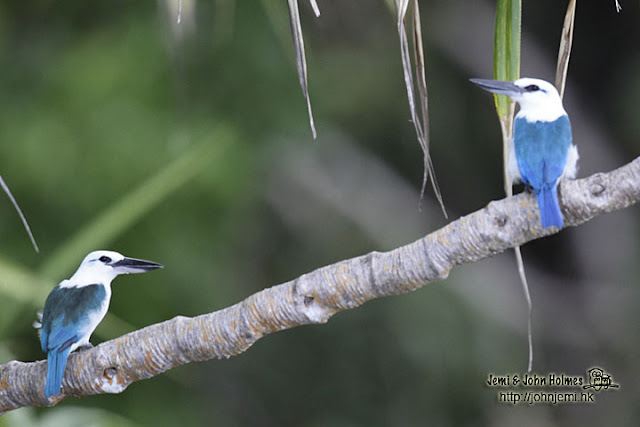 After the morning's birding we were given an "Island welcome" at Anuta village. It seems that the "Spirit of Enderby" is the only foreign ship that ever calls at Anuta, and the villagers are still happy to give overseas visitors a traditional welcome. 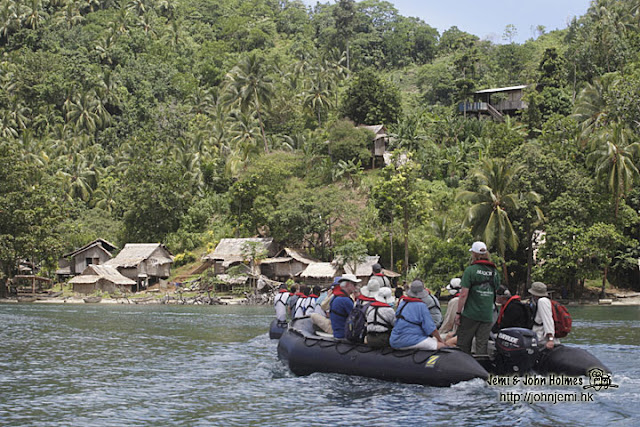 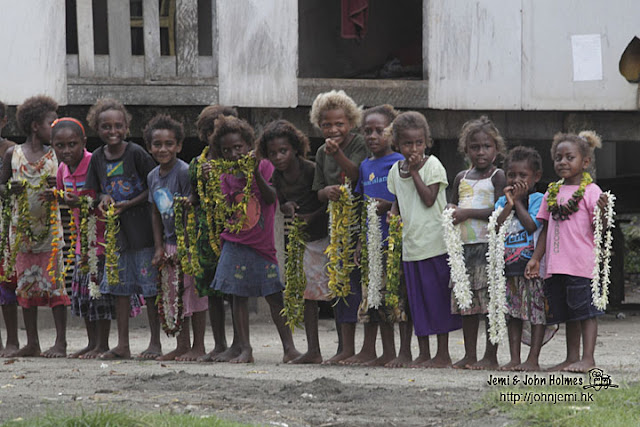 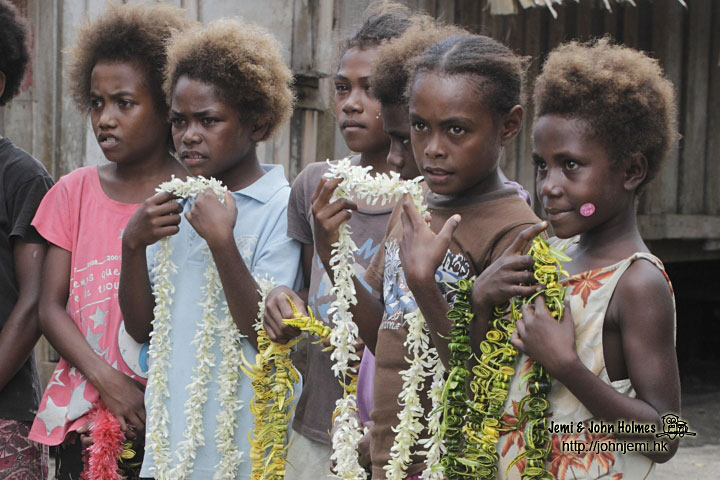 We were garlanded by a line-up of the village girls and seated and given a coconut each. 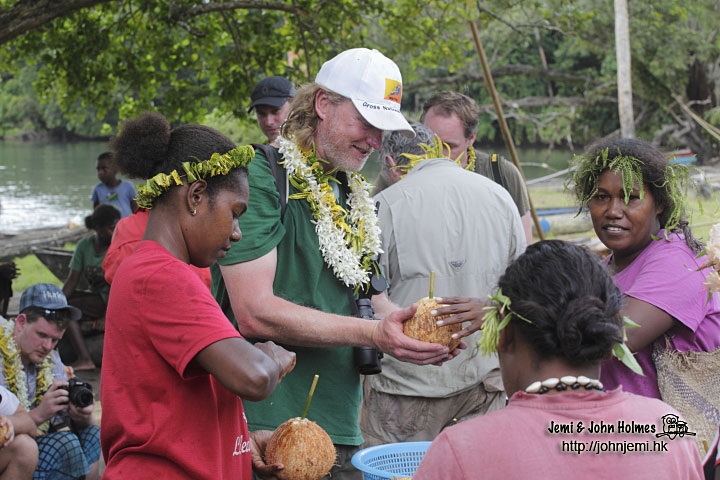 There followed a short speech (in English) by the village head .  It was all very pleasant.  Jemi's polaroid instant-print camera was a big hit. So much so, that the camera kept overheating when she was trying to produce some photos for the kids. 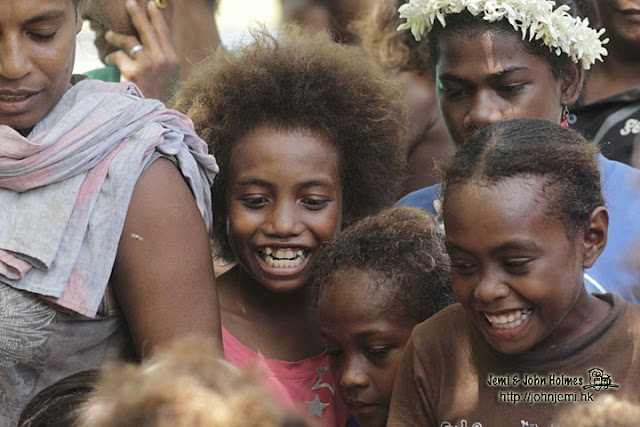 Then, we alien invaders sailed away with the next stop being the island of Guadalcanal with Honiara, capital of the Solomon Islands. 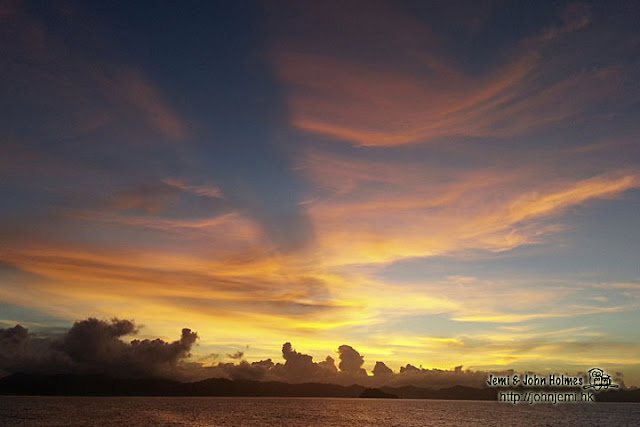 The catering staff rose to the challenge of providing a 03:30 breakfast, and all the birders were ashore before 05:00hrs.

And, if I haven't mentioned it elsewhere, the food was consistently excellent. 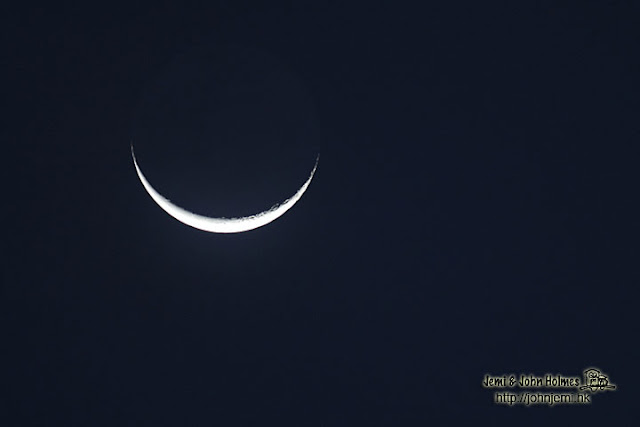 Inland of Honiara, we arrived at the 410 metre summit of Mt Austen just as dawn broke. 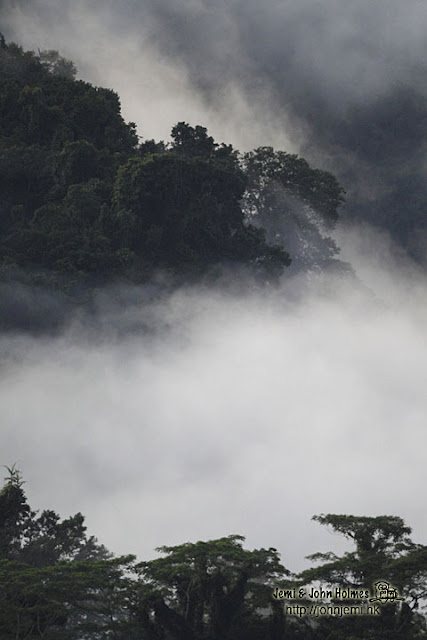 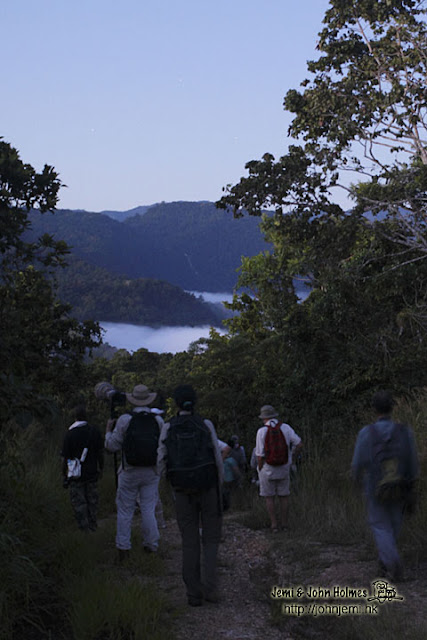 Mt Austen proved to be a pretty good site with Blyth's Hornbills giving an early morning flypast in ones and twos. 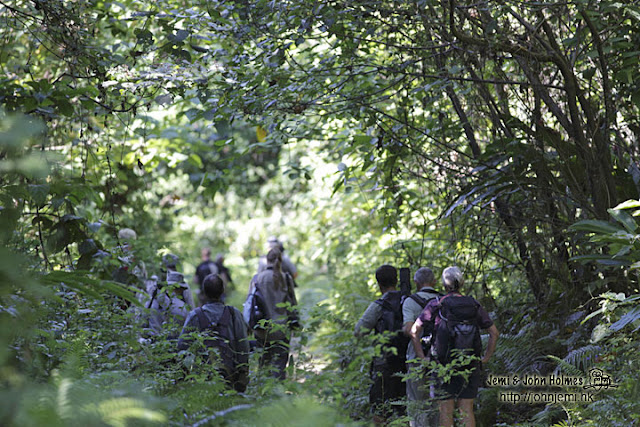 Any kingfisher being a highlight, this fearless Ultramarine Kingfisher - which stayed put for over half-an-hour - was much appreciated.


So much packed into one morning, and we were away in early afternoon. 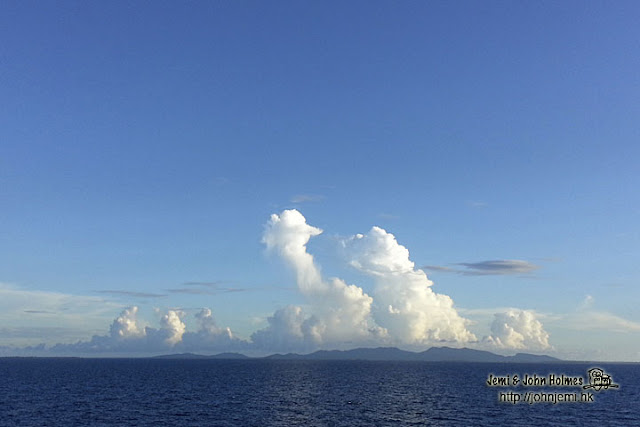 Here a view of western Guadalcanal. As evening drew closer, we could watch the clouds slowly change colour.... 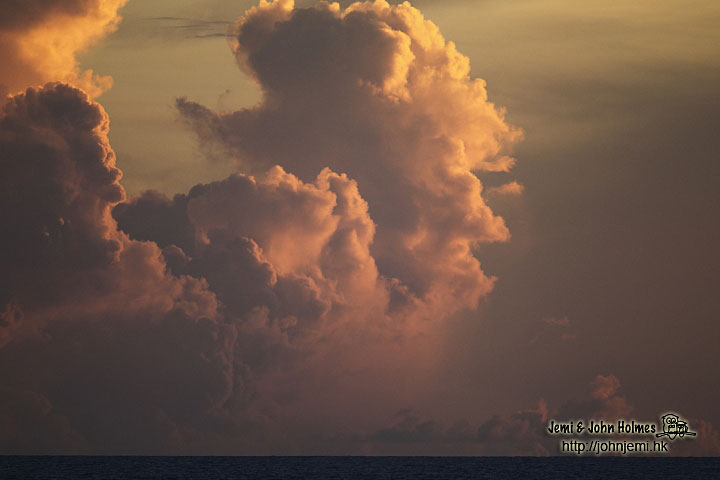 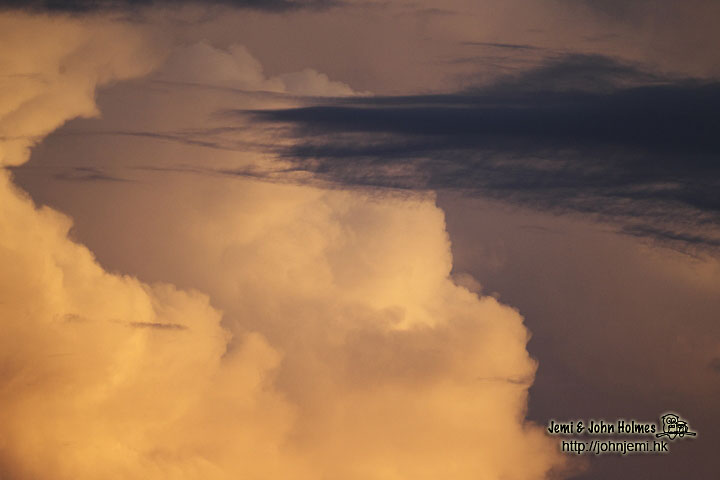 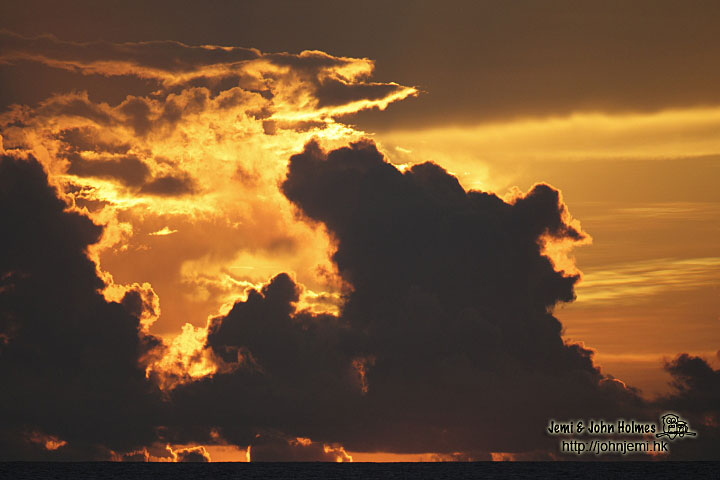 Next stop; - the volcanic cone-shaped island of Kolombangara !
Posted by John Holmes at May 27, 2013