The promise of youth - Part One

In 1976, when I was a student, I went to see Middlesex vs Leicestershire play at Lord's in the English County Championship. There were few spectators at the ground.

I used to bat (badly) left-handed myself, so I was interested to see a stylish young left-handed batsman called David Gower make his first First-class hundred in that game.

He was a few months younger than me, but, after seeing his performance that day, I projected my "England batting megastar" fantasies onto him. Like anyone with a real talent for anything, he made batting look so easy. Indeed, there were times later in his career when he could have made the effort to look like he was trying a little bit harder. 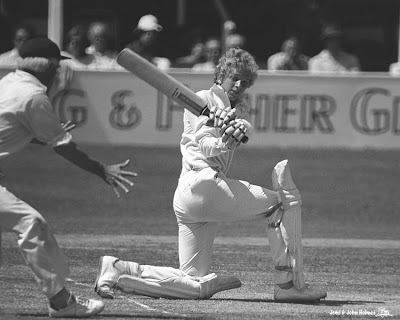 This picture was taken at another county game (in 1978), shortly before he made his England debut. (The fielder is David Steele of Northants.)

David Gower played for England between 1978 and 1992 . He scored over eight thousand runs (18 centuries) and became a household name. He is now one of the Sky Sports cricket commentators.

Back at Lord's in 1976 I became a David Gower admirer from his earliest county cricket playing days.

He was fifty-three last week.