The "Fab" here refers not to the Beatles, of course, but to Anser fabalis, - the Bean Goose.

Last Saturday three were sighted at some distance on the tidal mudflats of Deep Bay, but like most people, I missed them.

A Sunday report - more like a rumour - elsewhere in Deep Bay and then it went quiet. Geese can be very brief visitors to Hong Kong, I recall Greylags that lingered for just an afternoon in January 1997.

More recently, the habitat managed at Lok Ma Chau has held Whitefronts -singles of Greater and two Lesser - for most of the winter months.

Yesterday FOUR Bean Geese were photographed over Long Valley, and re-found a couple of hours later at sunset in front of the Tower Hide at Mai Po. Well sighted, Koel KO !

A HK-style "Twitch" ensued this morning, and the faithful were rewarded with views of four individuals..... they were disturbed by a Kite, but in due course returned to the pond in front of the Tower Hide, when these photos were taken. 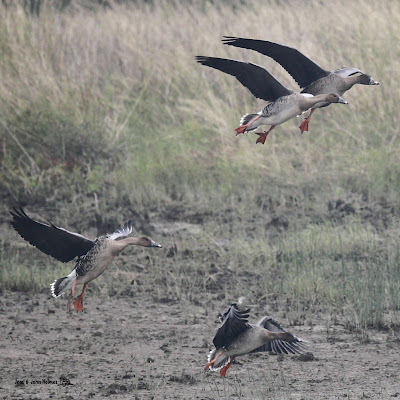 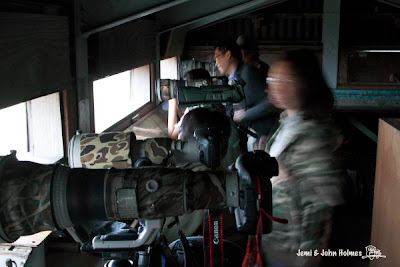 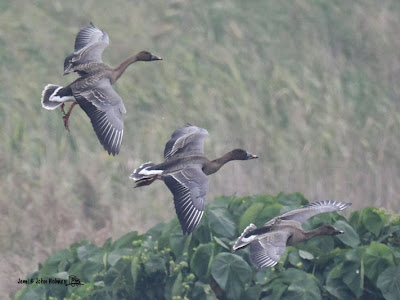 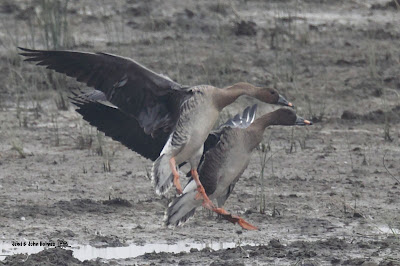 According to "The Avifauna of Hong Kong" Bean Geese used to be "abundant" up to the 1930s in Shantou, East Guangdong, which is slightly to the north - as well as east of HK.

And as a bonus, there is speculation at the moment that we may have two individuals eack of the races serrirostris "Tundra Bean Goose" and middendorffii "Taiga Bean Goose".

If this proves to be the case, Christmas has come early for Hong Kong listers !
Posted by John Holmes at November 04, 2010