Our first taste of the public bus system in Costa Rica saw us on board a shiny new Chinese-made "Higer" coach, thundering southeast from Los Chiles near the Nicaraguan border to San Carlos. The coach had the customary television rack on the ceiling behind the driver, but mercifully there was no blaring TV in it.

We changed buses at San Carlos, and got to Puerto Viejo in late afternoon. We arrived at Estación Biológica la Selva in a Taxi and picked up our "Welcome Package" from the gate attendant. (On the phone a couple of days earlier, we had booked four nights at La Selva by phone.) The website is here:

La Selva is a protected area of 1,600 hectares of lowland forest at the tip of Braulio Carrilio National Park.  A network of well-maintained paths runs through the site. There are plenty of birds around, including this pair of Currassows at the edge of the football field.


Nearby, another large and characteristic bird..


La Selva is not a hotel, so the rooms are rather spartan for the money you pay, and meals are taken in the canteen with the researchers, students and staff. Still, the birds and other wildlife made it great value.

In the "other wildlife" category.

The station has a public birding session from mid-morning  and keen birders can hire one of the available guides from 06:00 for a couple of hours at first light. Our rooms were actually a full kilometer from the main station area, but we always saw "good" birds along the broad concrete track between the two places.

While there we saw a number of foreign birding tour groups coming and going. Some were staying at the station, but others were obviously staying in the variety of lodges and hotels in the area outside it. With a lot of active birding going on, the visitor can pick up the latest "gen" quite easily.

A good example of following up "gen" was news that Bare-necked Umbrellabird could be seen near a certain junction of two of the tracks.


This was "only" a female, but we were pleased to find it. Another species we stumbled over by ourselves was a party of Purple-throated Fruitcrows.


La Selva turned out to be a great way to bring our Costa Rican birding to a conclusion.  We saw a good number of birds that were new to us, even though we had been in Costa Rica for four full weeks by then.  There were "best yet" views, too of species we'd seen before. The birds were relatively unafraid of people, too, so there were some decent photo opportunities.

With generally poor light under the forest canopy, I used the tripod quite a lot at this site. This crocodile was a reminder not to stray off the paths. 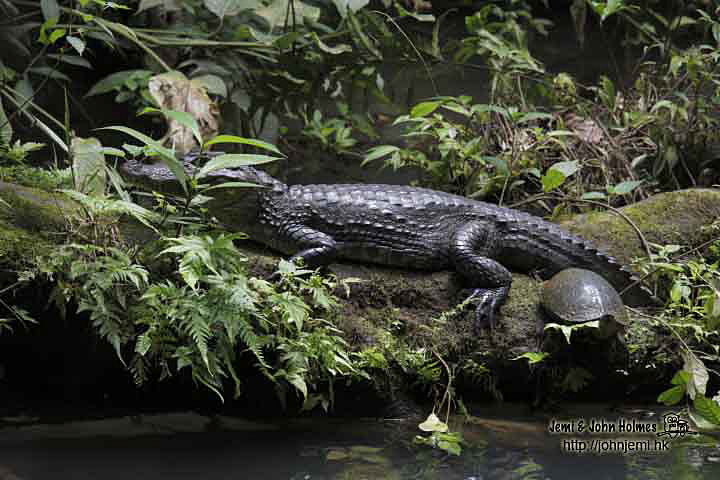 A fairly typical example of the "small stuff" on the forest floor. We didn't have any bird tapes, so it took a bit of patience to get a clear view.

More birds were encountered in the forest between the canteen and our rooms.

Our last night in Costa Rica was back at the Hotel Gavilan, where we said "Adios" to our friends there, including the Spectacled Owls.

From there, we took a taxi to San Jose Airport (2 hours).

While in Costa Rica we saw about 350 bird species. The well-organized or well-guided birder would probably see more birds than we did, but we did it at our own pace, and thoroughly enjoyed it.

And who would have guessed*, Costa Rica's football team did far better than England at the 2014 World Cup.

(*Actually, about four million Costa Ricans could have guessed, probably)
Posted by John Holmes at July 13, 2014